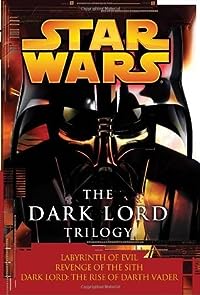 For the first time in one thrilling volume, three novelsLabyrinth of Evil, Revenge of the Sith, and Dark Lord: The Rise of Darth Vaderthat follow an epic chain of events: the last days of the Republic, the creation of the Empire, and the ultimate transformation of Jedi Anakin Skywalker into the notorious Darth Vader.On the planet Neimoidia, Jedi Knights Obi-Wan Kenobi and Anakin Skywalker seize an unexpected prize: intelligence capable of leading the Republic forces to the ever-elusive Darth Sidious, who is ruthly orchestrating a campaign to divide and overwhelm the Jedi forces.

Tormented by unspeakable visions, Anakin edges closer to the brink of a galaxy-shaping decision, while Darth Sidious plots to strike the final staggering blow against the Republicand to ordain a fearsome new Sith Lord: Darth Vader.Once the most powerful Knight ever known to the Jedi Order, Anakin becomes Darth Vader, a disciple of the dark side, a lord of the dreaded Sith, and the avenging right hand of the galaxys ruth new Emperor.

For the handful of scattered Jedi hunted across space, survival is imperative if the light side of the Force is to be protected and the galaxy reclaimed.

This book is three novels in one, chronicling the downfall of Anakin Skywalker and the rise of Darth Vader. The focus of the book is mainly the hunt for Darth Sidious by Anakin and Obi-Wan, due to a slip up by Nute Gunray that allows the Republic to track Sidous down. But the fight between Dooku and Anakin and Obi-Wan is well written, as are most of the battles in the book. Book #3 Dark Lord: The Rise of Darth Vader by James Luceno.

Nonetheless, despite clear differences in writing styles, the books do hold up a level of thematic and chronological consistency, chronicling the tragic fall of Anakin Skywalker and his rebirth as Darth Vader. Labyrinth of Evil provides an excellent set-up to Anakin's fall, while still giving enough references to past exploits and current scenes of heroic action to present Anakin as a genuine hero and to flesh out the relationship between Anakin and Obi-Wan. The poignant sense of heartache felt by a separated Anakin and Padme does wonders at legitimating their love, something the movies often fell short of. Nonetheless, the action and tense pursuit of clues by the heroes manage to maintain some degree of suspense, but the author's purposeful avoidance of Sidious' identity feels a little bit like cheating the reader, forcing a mystery out of nothing. For those readers who pick up the book without enough Star Wars knowledge to be aware of Sidious' identity (i.e., those who have not before seen the movies), I am sure that they were only further confused by the myriad references to past events from other novels and movies. I would like to go ahead and say that in Dark Lord: The Rise of Darth Vader, Luceno really triumphs with his description of lightsaber combat--and I tend to find sword combat poorly described in text, often too focused on over-explaining individual movements and swings. Something rubbed me the wrong way about descriptions of characters in the midst of action, set off with things like, "Here's how it feels to be..." Nonetheless, the end description of Anakin is quite intense.

Let me rewind to the first novel in the collection "Labyrinth of Evil." This books main focus in the inner workings of Emperor Palpatine's mind as he makes is final moves to Take control of The Republic and bring Anakin to the Dark Side.

If you're expecting it to be an over-worked comic book, you may be pleasantly surprised; though not so much for the novel treatment of Episode III.

Luceno strikes the balance between heartfelt character moments and the lightsaber action so beloved of Star Wars. Matthew Stover's novelization of Revenge of the Sith did not strike the same chord. In Dark Lord: The Rise of Darth Vader, James Luceno once again proves himself. This book reveals the final moments of Anakin Skywalker before they are subsumed by Darth Vader.