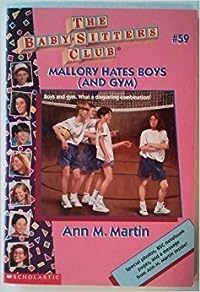 Being a "total spaz" in gym is bad enough, but now Mallory's worst nightmare has come true. Gym class has gone co-ed! Pre-teen girls are sure to relate to this latest book in the phenomenally popular Baby-sitters Club series.

Though her worst subject has turned into a nightmare, and once the boys in her gym class find out that she can not play volleyball, they decide to make her life really suck.

in this glimpse into the unnuanced thought process of an 11-year-old by ghostwriter Suzanne Weyn mallory's class has to take volleyball lessons with boys. the boys realize that mallory sucks at sports and target her, prompting her to refuse to participate and get detention. meanwhile, all the male bsc kids are terrors, and mallory thinks that it's due to boys being the worst. walden tells the boys to let up on mallory if she tries in volleyball. because she wants to be with this guy: or, I dunno, maybe this guy: -mallory is actually really good at archery and ends up trying out and making the archery team (do we ever hear about this again in later books, I wonder?). -ben says something about how he knows girls aren't delicate flowers but they do play sports in a less aggressive way than boys. (This earring set is her own creation.)" dawn outfit: -"For example, today she was wearing black stirrup pants, a long, fleecy red-and-pink rose-print top and black high-top sneakers.

Then she's almost late to a BSC meeting and we get a Claudia outfit along with a special What Dawn Was Wearing. In the other ear, where she had two holes, Claudia wore two small papier-mache hoops. (This earring set is her own creation.) 2 things: I had purple pants exactly like that in 5th grade. (I just listened to again, so good still lol.) And also, it would have been nice to have some continuity from the previous book and have her wear her cat & dog earrings. Today Dawn was wearing black stirrup pants, a long, fleecy red-and-pink rose-print top and black high-top sneakers. Just like Mallory. After the meeting, Jessi & Mallory are walking home and Jessi reminds her that they are starting the volleyball unit in gym on Monday and they'll be co-mingled with the boys. :) Every book that has even the slightest hint of physical activity makes Mallory panic and immediately come up with plans to get out of it. The side plot is that all the boys they baby-sit for are suddenly little monsters. Mallory comes up with this long convoluted theory that makes no sense; something about if they were raised in Stoneybrook and went to gym class there, they were super aggressive animals. Back in gym class, Mal keeps walking off and the gym teacher finally sits down and talks to her. So good that her teacher tells her to try out for the archery team and she makes it.

I remember really, really liking this book as a kid, especially because at the end Mallory finds that although playing volleyball with preteen boys isn't her cup of tea, archery is. As a kid, volleyball was the one sport I liked a lot, and was really good at, probably because it didn't involve lots of running. However, I sympathized with Mallory in this book because even though I liked volleyball, I hated playing with boys of a certain age. Later we went to high school together, and I thanked god every day that the girls and boys had separate volleyball teams because his intensity got worse as he aged. I remember very clearly the beginning of the book when all the Pike kids are saying what they think "pandemonium" means, and Nicky says it sounds like a disease. (Mallory does realize at some point that in the big picture of life being a bad volleyball player isn't the end of everything, but since she's stuck inside the little picture it seems like it is.) And it's a bit much, especially when she decides that all boys, everywhere (at least everywhere in the Stoneybrook), are a problem, even the little boys she baby sits for. Despite my dislike of Mallory's attitude, and despite the stupid subplot which involves Mallory thinking all Stoneybrook boys are terrible, and deciding that the Hobarts are so well behaved because they were raised in Australia, I liked that this book handled Mallory's problem reasonably well. Reading about Mallory's experiences reminded me a lot of the whiny, drippy boys and girls who suffered through gym far more than I did, so I think that part was well written. She's a gym teacher through and through about it ("That's good strategy," is what she calls the kids practice of aiming hard, fast balls directly at Mallory, knowing that she'll jump out of the way) but she understands how difficult it is to put up with the treatment day after day.

She does her best snarking and rebelling when she justifies that knowing how to play volleyball will never become important in her life's ambitions and how boys are just awful (except a few more gentlemanly guys like Ben and Logan, or so she verbally backtracks.) At the same time, her brothers are acting as unruly as usual and her frustrations with them only fuel into her boys are awful viewpoint. Finally, she talks to her detested gym teacher and they make a deal, if she makes more of an effort to participate, then the teacher will ask the boys to ease up on her. The change in point of view went over my head when reading this as a kid: I could sympathize with Mallory having to deal with playing the sadistic sport of volleyball, though I never had the nerve to risk detention by sitting out.

on the walk home, jessi informs mallory that their gym class has finished field hockey & will be moving on to volleyball. mallory is disgusted & humilated by the idea of boys seeing her cowering from the ball in her ugly gym uniform. mallory is getting gym class served to her on a silver platter & she's whining about it. this eventually culminates in a volleyball to the face, which makes her lose her temper & yell at her gym teacher, who proceeds to bench her. she discovers that her parents will be receiving a letter about her detention, so she decides to bench herself for every gym class, take the detention, & then rush home & collect the letter before her parents see it. walden gets sick of mallory's attitude & makes her wash all the pinnies after school instead of sitting in detention. mallory realizes that all the bratty charges are boys, so she starts concocting a theory about how exposure to gym class makes boys from stoneybrook big entitled jerks. mallory is looking forward to having three angelic boy siblings for a night. pike also convinces mallory to talk to her gym teacher about the trouble she's having in class. walden agrees to talk to some of the rowdier boys about letting up on mallory, if mallory promises to try her best in class. add archery to the locked room on the fourth floor of the brewer mansion where we're stashing the zuni pen pals, the stoneybrook middle school recycling program, pete black's class presidency, curtis shaller, lewis bruno, & every other random thing from these books that never gets addressed again.

I sympathize with you, Mal. Although you only had gym twice a week, so screw you on that one.