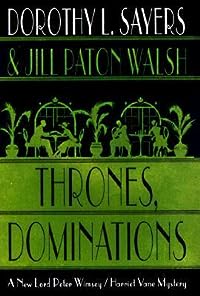 The wife of a wealthy man is found dead, and it is up to Lord Peter Wimsey and his wife, Harriet, to solve the case.

I'm not sure the label exactly fits Thrones, Dominations, but it is like a great many Star Trek novels I read when I was a teenager. I have little background knowledge of Jill Paton Walsh; I'm not saying that she doesn't know and love the Lord Peter books as much as any of us. Because there are times when Thrones, Dominations feels like it ought to. It's distracting to be wondering throughout the book "was that genuine Sayers or counterfeit?" hoping in some ways that some of the good lines were JPW, because that would mean she was capable, while knowing given the sheer weight of not-Sayers that it was unlikely. The metaphor that came to me about halfway through (because I do love me a metaphor) was: it's like meeting with an old friend you haven't seen in a long time, and they've changed. A complaint I've read about the book, with which I wholeheartedly agree, is that JPW seems to have gone back through the existing novels and gathered up minor characters from Bill Rumm to Uncle Paul (and someone on the LPW group is right he would not have called him Uncle Pandarus in front of everyone) to Harriet's friends Sylvia and Eiluned to Gerry and Freddy Arbuthnot, along with references to canon books (far more than I remember Sayers ever using), and tossed it all like fairy dust into the reader's eyes, hoping for a façade of credibility and/or distraction from the book's deficiencies. He has had a handful of lines of dialogue and one scene in which he sits down for a drink and a debriefing with Peter. Also beaten to a pulp is the idea that this is a New Thing for Peter and Harriet. Peter has to adjust to having the woman he has sought after so long, to living with her in a new expansive home and the changes that entails. I think that if you take any of the canon books (yes, I do subtract the JPW books from canon, whatever the Sayers estate might say) and strip the dialogue of all the tags ("Peter said" and "said Harriet" and "replied Parker" and so on), it would not be very hard to pick out the lines spoken by Peter (or Harriet or Parker or Bunter, for that matter). Here Peter's dialogue is very generic, and where it's not it is very similar to lines spoken by Harriet and Parker. ("Scissors moment" is what it's always called on the Yahoo Lord Peter Group: In the short story "The Footsteps That Ran" it is illustrated by looking at the letters "ciorssss" and finding no meaning until the letters just jump around in the brain and "scissors" becomes clear: the "Aha!" moment.) The quotes and allusions are even more aggressively obscure to well, to me at least, than any Dorothy L. I like that Peter and Harriet are able to volley them comfortably back and forth they always did. (Which could be because I've read the books so many times but I don't think so.) (I'm still trying to figure out what exactly is meant by "Peter dislikes women with green fingernails" perhaps a reference to Picasso?) This is a spoiler, of sorts, but not if you've read the canon stories: (view spoiler) One huge complaint, loud and irritated: Oh, come on, really?

While I thoroughly loved the cleverly plotted mystery itself, what truly delighted me was the exploration of Harriet Vanes life as a new bride. I also loved the scenes featuring the snobbish, overbearing Helen, Duchess of Denver, wife of Lord Peters dim-witted elder brother, as she tries to steer her sister-in-law out of her career a working wife being anathema in the aristocracy into a life of parties with only the right people, bullying servants, paying visits to other wives, and producing children in other words, the life expected of the decorative wife of a member of the peerage. Thrones, Dominations gives readers hope of many more years of Lord Peter and Harriet Vane.

I read it within a 24 hour period off and on between coming/going, and a dozen other physical tasks. And it still kept its integrity, cognition, feel for tone that is period/place and personality unique- through all those "interruptions". Of course there was a style shift that did occur right about the time of the murder- and with that long and first months of marriage beginning, I can understand how Sayers let this one lay. People and their sensibilities and values to "open" conversations are closely meshed into their era and personal experience of "norm".

Last year I, finally, read all of the Lord Peter Wimsey mysteries and enjoyed them thoroughly. In fact, I missed Wimsey so much that, when a book group I am a member of, suggested reading the novels written with the involvement of Jill Paton Walsh I was tempted. As Peter and Harriet settle into life in London, they find they keep bumping into either Lawrence or Rosamund Harwell. I really enjoyed the mystery element in this novel, as well as the historical context and the continuing relationship between Peter and Harriet.

I remember reading that Sayers ended up stuck with the plot of this one, hence never finishing it: in my own writing, I've always followed the line that if I'm really resistant to writing something, there's something wrong with it, which just plugging away at it won't fix.

Once you get it in your head that you're reading fan fiction, this isn't a horrible book.

Or rather, I've been on a Peter and Harriet binge, as over the past few weeks I've re-read the four novels involving them one after the other.

Even without a badly contrived scene where Harriet reads in the paper about a manslaughter case where a man has attacked his wife in a fit of passion and then accidentally killed her by falling on her, the crime provides little interest because you know what it will be and who will do it almost from the start. The passages that lend extra dimensions are ones that quote most significantly from Dorothy Sayers other Lord Peter books. The love between Lord Peter and Harriet as evidenced in "Busman's Honeymoon" is totally mechanical in this book. Next, Walsh does not understand the relationship between Bunter and Lord Peter, nor indeed the relationship between the servants and the landed gentry. It isn't the same Lord Peter, Harriet is a stereotype and not a real woman, the crime is uninteresting, and the sparkle so usual in Sayers books is totally gone.

I was hesitant to read this book as my understanding is that Sayers herself didn't finish the novel but that the plot was taken fom her rough drafts. As desperate as I was to get news of the Wimseys post-honeymoon, I think ultimately this book is a failure.