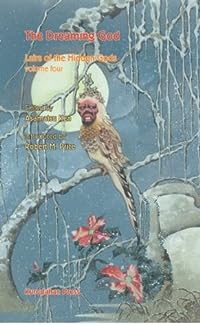 This well-received collection of original stories and articles inspired by the 'Cthulhu Mythos' created by H.P. Lovecraft was published in Japan in 2002 as a two-volume set under the name Hishinkai.

The list of contributing authors is a who's-who of Japanese horror fiction, featuring some of the finest writers in Japan today, and reviews demonstrate that the Japanese taste for horror can send shivers up English-speaking spines as well We are proud to present this fourth and last volume of the series, with a new selection of eerie masterpieces to delight and chill you.

In addition to handling many of the covers for the Japanese-language editions of Lovecraft and other Mythos works, he has built up a loyal following in the States as well for his work.

Sadly, this is the 4th book of the four-volume series entitled "Lairs of the Hidden Gods," meaning that I've come to the end. As to volume four, overall a very fine collection...some were a bit weird even for my taste (which can be way out there)...a bit more graphic than in the other three at times. Contents of Volume Four (The Dreaming God) are: "Quest of the Nameless City," by Tachihara Toya: done in three parts -- you may want to be familiar with "Journey to the West" prior to reading this (at least go read something about that work) because the characters in this story come right out of that work. "Inside Out," by Tomonari Jun'ichi: A Japanese writer named Daisuke spends his days trying to be creative, only to be disrupted by "one of his closest friends" named Chau-chan. "Inside Out" is the story of how she came to live in his apartment, going back to the time he took a trip to Fiji. "City of the Dreaming God," by Yufuko Senowo: a man lives with his wife and daughter in a strange village by the ocean. There are also two essays at the end of the book, one dealing with Lovecraft and Modern Occultism, and another is a look at Cthulhu and his friends on the silver screen.

"Lair of the Hidden Gods" is a 4-volume anthology set of Japanese horror-fiction loosely inspired by the Cthulhu mythos of pulp writer HP Lovecraft.

The Dreaming God completes the mesmerizing tetrology of newly translated Japanese Cthulhu mythos fiction (or Yog Sothothery if you prefer) from Kurodahan Press. These stories originally appeared in Japan in 2002 and are now available to western readers for the first time. The cover art, marvelously beautiful and unique among all mythos books, is by Yamada Akihiro. Each cover in the series represents one of the seasons (Night Voices, Night Journeys spring, Inverted Kingdom summer, Straight to Darkness fall and The Dreaming God winter). Page count in each book was generous; here it is 382, including a 7 page forward, a 6 page introduction by Robert Price, a front/back otherwise blank title page for each story, a 2 page introduction discussing each individual story, also by Price, 3 nonfiction essays beginning on page 289 and minibios of the contributing authors and translators starting on page 373. Here are the contents: ASAMATSU Ken: Foreword translated by Edward LIPSETT TACHIHARA Toya: "The Quest to the Nameless City" translated by Kathleen TAJI KURASAKA Kiichiro: "A Night in Exham Lodge" translated by Daniel DAY AZUCHI Moe: "...Which Art in Heaven" translated by R. Keith ROELLER FUSHIMI Kenji: "Rshanabi Street" translated by C.F. RYAL and Yaemi SHIGYO SENO Yufuko: "City of the Dreaming God" translated by Kathleen TAJI HARADA Minoru: "H.P. Lovecraft and Modern Occultism" translated by Naomi OTANI WASHIZU Yoshiak: "The Cthulhu Mythos on Screen" translated by Michiyo MAYUMI AOKI Jun: "Filmography of the Cthulhu Mythos Films" translated by Edward LIPSETT As in previous volumes, all of the authors and stories were new to me. As usual, I was very appreciative to get the small blurbs on each author, discussing where they first encountered Lovecraft or what they like about him. Perspective and prose are all strikingly original compared to our usual mythos fare. Maybe they are successful, but poor Sandy becomes a Deep One. I also agreed with Price's introduction that this series of three narratives was modeled after (or at least strongly resembled) Derleth's Trail of Cthulhu. In a few pages of horrific prose more graphic than Lovecraft himself would have imagined, the residents of the hotel intoxicated on kava, recreate a cannibal rite. "Rshanabi Street," another fine tale, is best appreciated after reading Price's introduction. In summary, a masterful book, part of a completely unique and original Lovecraftian series of anthologies.

These stories are, in my mind, some of the most compelling in the series and "City of the Dreaming God," by Yufuko Senowo was my favorite here, as two academics realize how strange the little Japanese mountain town overlooking the sea really is, with some intriguing philosophical and theological debates included as well.