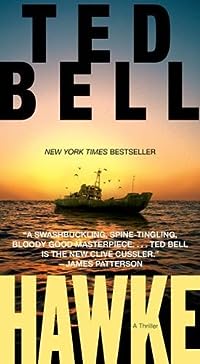 A direct descendant of a legendary English privateer, Lord Alexander Hawke is one of England's most decorated naval heroes.

Rick and I both like Clive Cussler and the Dirk Pitt series so I thought I would give 'Hawke' a try. I don't think I will be reading any more Hawke books. Bell is clearly trying to create a Pitt-like character. Hawke is almost a caricature of an English nobleman (Lord Hawke) with his faithful butler, Pelham, and his antiquated mode of speaking (old thing, jolly good, I say, etc.) It's as it Bell is trying to one-up Cussler with Hawke. With Cussler's books you have an ancient or old maritime wreck that figures prominently and dovetails neatly with the contemporary threat. In 'Hawke', Bell slaps together a contemporary threat and then forces a connection with an old mystery. Bell relates how during the first Gulf War Hawke flew Tomcats. Here are a couple of others: - Hawke meets with two Russian arms dealers, looking to buy a nuclear missile submarine. Bell then doubles down on the error by referring to an Akula Typhoon. - in the finale Bell has American F/A-18 attack aircraft attacking ground targets with Aim (not AIM) - 9 Sidewinder missiles.

One of the worst-written books I've ever read. Mr Bell would do well to read and study every Ian Fleming-written James Bond book for lessons in subtlety, depth, nerve-scraping suspense (cf.

It must have been the only book published the year it was a best seller. I originally read the second book in the series: "Assassin." "Assassin," was a passable thriller, and it's clear that Ted Bell not only advanced as a writer, but also received much better editing help. One of the fun parts of book 2, was the casual references to past Hawke exploits.

He also has a parrot named Sniper that warns him of anything bad happening and a treasure map from his ancient ancestor, the notorious pirate Blackhawke. It was silly, it was wrong (a Glock pistol does not have a safety latch to toy with, and Sidewinder missiles cannot attack ground targets as they are air-to-air missiles), it was overly oriented toward action which dragged in the middle of the book, it was cheesy as all hell and yet, somehow, stupidly, it worked.

Pirates board his family yacht in search of a treasure map. Alex watches while pirates festooned with a spider tattoo that spouts a sprinkling of cartoon villain Spanish murders his parents.

Ted Bell's Hawke wants to be a big, fun adventure in the Bondian tradition but it ends up being a thoroughly mediocre slog, nowhere near as fun or epic as it seems to think it is. A coup d'état in Cuba, an down-and-out American naval officer, a decades-old treasure map and a tragedy from Hawke's past all figure in to the story. Hawke feels a lot slower than it should, and a big part of why is that Bell doesn't seem to understand pacing very well. There are scenes that should be done in one chapter that are spread out over several because Bell feels the need to split them up with other goings on. He wants Hawke to be witty like James Bond, but he doesn't know how to write wit so everything Hakwe says ends up being either corny or just flat. The same holds true for the other characters, but Hawke gets most of what Bell seems to think are the best lines, so he comes out the most scathed. Throughout the book, Bell has different characters reflect on past Alex Hawke adventures and that works really well in creating this adventure-serial world. I preferred them greatly to the rather dull Congreve and Ross (Bell seems to do better with American characters than Brits; seeing as he's American himself, that isn't overly surprising in hindsight, though it's a bit problematic since he decided to make the hero of his books an Englishman).

The series was highly recommended by a friend who loves some Jack Reacher like me. I may try to get my hands on one of the books on audio.

He is the author of twelve consecutive New York Times Bestsellers. His novels include the Lord Alex Hawke series of spy thrillers published by HarperCollins and the Nick McIver Time Travel Adventures published by St. Martins. He was formerly one of the leading talents in advertising, having won every award the industry offers, including numerous Clios and Cannes Gold Lions, and, as Worldwide Creative Director of Young & Rubicam, the Grand Prix at the prestigious Cannes Festival.