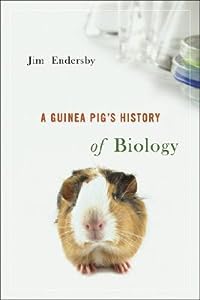 A Guinea Pig's History of Biology

How this curious creature and others as humble (and as fast-breeding) have helped unlock the mystery of inheritance is the unlikely story Jim Endersby tells in this book.Biology today promises everything from better foods or cures for common diseases to the alarming prospect of redesigning life itself.

Looking at the organisms that have made all this possible gives us a new way of understanding how we got here--and perhaps of thinking about where we're going.

Read the Book "A Guinea Pig's History of Biology" Online

I picked up "A Guinea Pig's History of Biology" due to the recommendation author Sam Kean made in "A Violinist's Thumb". Endersby's book was a bit more textbook-like for me, with none of the slightly snarky and irreverent treatment that made A Violinist's Thumb so readable.

We learn about the findings that came from experiments with corn, mice, drosophila (fruit flies), bacteriophage, guinea pigs, the evening primrose, and humans (the last by observation and measurement -- not breeding experiments, thankfully).returnreturnMost all of the major scientific players are mentioned here -- Darwin, Mendel, J.B.S. Haldane, Watson and Crick, Barbara McClintock, and many others -- and the book is most engrossing when Endersby delves into their relationships and the scientific communities that have formed up around them. The energy that has gone into supporting the fruit fly science industry, for instance, is impressive and not well known.returnreturnThese topics are not without controversy and Endersby deftly works in a few comments on issues like animal testing and genetically modified organisms, even tentatively offering his own personal opinions in later chapters.

Each chapter is titled after an organism that contributed to biology (like, guinea pigs and fruit flys), but the individual chapters jump around a lot, and don't always stay on topic. It's giving thanks to them many plants and animals that have contributed to our understanding of biology. I liked this because I feel that while people are usually given thanks for their contributions, the plants and animals seldom are. The books didn't just talk about the animals, but gave stories to illustrate specific examples of how the critter in question contributed.

I tried, and tried, but I could not complete reading this book. In the light of these grave difficulties, I think the author has done a commendable job and I do hope to do him better justice by completing the book and modifying this review sometime in the not too distant future.

What stands out most for me is the role of having open learning communities that are investigating one organism, sharing data, inspiring and teaching each other.

It tells the story of a science by looking at the various living creatures that have been used for experiments. I could see this being a basis of perhaps a high school course in biology.

I was hoping the guinea pig would be our furry guide through the wacky and often sticky world of biology.

However the book felt more textbook like and less story telling.