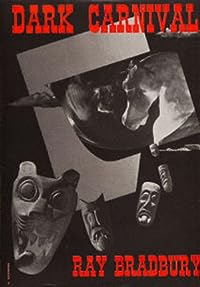 Ray Bradbury's first collection of short fiction, Dark Carnival, is certainly far from perfect. both sorts of stories have a thinness to them, a smallness of purpose, that can be rather eye-rolling to a reader like myself who is always looking for resonance over effects and startling climaxes. it feels like it was written just for me! surely one of the hardest things to truly capture in words; Bradbury, with ease, uses the smell of things and people and places as just one more tool in his very large toolkit to help his reader fully enter his worlds. at this point in my life, I've been a reader for several decades, so surprises come not as often as I'd like in my readings. Bradbury really flexes his stylistic muscles throughout and within the stories. the only thing consistent throughout the stories is the darkness. often I was surprised at how dark Bradbury was willing to get. I almost read past the brief scene where the little boy is talking to his sister who can travel throughout any being's mind (...and make them do things...) without realizing what actually occurred there: she drowsily travels into the mind of a lonely wife awaiting her husband's return home; by the time she leaves, the woman has killed herself. Dark Carnival will have me hunting for another of his collections, From the Dust Returned. apparently that book collects all of The Family stories; Dark Carnival includes the cutely vicious "The Traveler" and the sweetly charming "Uncle Einar" in addition to Homecoming. and this lovely story suddenly ends with the sickening feeling that this child is about to experience something horrible beyond imagining with the latest visitor the dog has brought home. "The Small Assassin" is perhaps the most famous story in the book, about an infant born to kill. the most striking story for me was the brief "The Night", written in second person, and basically the story of a little girl and her mother's moments of terror while looking at a ravine in the dark, not hearing a boy who should have been home hours ago. over the course of its eight pages, it perfectly captures the fear of the unknown and the terror of losing our loved ones that lives in all of us, something that can never be comforted or hugged or loved away.

After reading Michael Dirda's book Browsings I wanted to read some Bradbury short stories so I was planing on rereading The Illustrated Man then I discovered I had this book which I'd never read Bradbury's first collection.

The collection of stories found in Dark Carnival is a trip into normal things turned into obscure and scary events. Not something we actively think about, until you read a story about a man who believes his skeleton is working against him. Ray Bradbury must be the exception to my rule, because I already read several of his compilations and his stories seem to be as long as they need to be.

Many of the stories are either about, or told from the perspective of children, and in Bradbury's hands childhood becomes both a receptacle of or vehicle for deep dread and horror. In Bradburys hands we get a story that will horrify even the most jaded adept of weird fiction. The only reason I didn't give the book five stars was the inclusion of three of Bradbury's Family stories, starting with The Homecoming.

This is a welcome edition (caveats below), with B/W thumbnail reproductions of the covers for the magazines in which the stories first appeared, informative introductions, a few extra stories written at the same time, reproductions of some of Bradbury's typed manuscripts, etc.

Ray Douglas Bradbury, American novelist, short story writer, essayist, playwright, screenwriter and poet, was born August 22, 1920 in Waukegan, Illinois. He became a full-time writer in 1943, and contributed numerous short stories to periodicals before publishing a collection of them, Dark Carnival, in 1947. In all, Bradbury has published more than thirty books, close to 600 short stories, and numerous poems, essays, and plays. Ray Bradbury's work has been included in four Best American Short Story collections. In November 2000, the National Book Foundation Medal for Distinguished Contribution to American Letters was conferred upon Mr. Bradbury at the 2000 National Book Awards Ceremony in New York City.