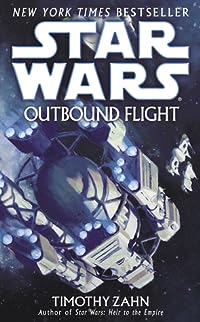 Now, at last, acclaimed author Timothy Zahn returns to tell the whole extraordinary story of the remarkableand doomedOutbound Flight Project.The Clone Wars have yet to erupt when Jedi Master Jorus Cbaoth petitions the Senate for support of a singularly ambitious undertaking.

The government bureaucracy threatens to scuttle the expedition before it can even startuntil Master Cbaoth foils a murderous conspiracy plot, winning him the political capital he needs to set in motion the dream of Outbound Flight.Or so it would seem.

For unknown to the famed Jedi Master, the successful launch of the mission is secretly being orchestrated by an unlikely ally: the evil Sith Lord, Darth Sidious, who has his own reasons for wanting Outbound Flight to move forward .

Thus what begins as a peaceful Jedi mission is violently transformed into an all-out war for survival against staggering oddsand the most diabolical of adversaries.Timothy Zahns unique mix of espionage, political gamesmanship, and deadly interstellar combat breathes electrifying life into a Star Wars legend.From the Hardcover edition.

For those not in the know; a number of years ago, Timothy Zahn effectively re-launched the Star Wars novels with his Heir to the Empire trilogy. Zahn eventually followed that series up with a duology, and finally, a stand-alone book that serves as a bit of a prequel to the New Jedi Order series, which I have not read, though I own the first book of it. Somewhere in the course of his novels, Zahn introduced the Outbound Flightan Old Republic expeditionary force that had been sent to try and explore another galaxy. would eventually find out about it, andwell, read Zahns other SW books if you want the full story on that. It also ends up distracting from Zahn's characters, who are frankly, way more interesting than Obi-Wan and Darth Child. In the end, I enjoyed Outbound Flight quite a bit, and any Star Wars fan, or Zahn fan, ought to read it (fans of both, doubly so).

It expanded the Anakin Skywalker story in just the ways I hoped it would, made his fall from Jedi glory understandable and sympathetic, and it introduced us to some of the coolest characters anywhere in the Star Wars Galaxy: Ahsoka Tano, Cad Bane, Hondo the Pirate and Asajj Ventress. I love all for of them as much as I love anyone in the movies (with the exception of Han, Lando and Chewie), and I would be willing to bet that my kids' favourite characters in Star Wars spring from that group (Ahsoka for Scout, Cad Bane for Beans, and Ventress for Te). He is, in short, one of the most complex charactes anywhere in the Star Wars Galaxy, and I will read anything about him.

The first ones I read were my mother-in-law's Thrawn trilogy that take place 5 years after Return of the Jedi. That said, I've not been especially drawn to the 40+ other books that take place after the Star Wars movies. I think it makes the movies a lot more enjoyable too because you see them in context of the larger, decades-long story of Palpatine's conquest.

Outbound Flight is basically the book where Thrawn meets the prequels. And while the concept of Outbound Flight (talking about the project itself now, not the book) is quite intriguing, it does not come anywhere near to discovering anything new, not to mention reaching another galaxy.

Timothy Zahn, often considered the Father of Star Wars Expanded Universe, returns to the Galaxy Far, Far Away to detail the story behind Outbound Flight, Jorus C'baoth, and, most importantly, Thrawn. Plot: Jedi Master Jorus C'baoth has come up with the ultimate mission: to send a group of beings out beyond the Republic, to the Unknown Regions to colonize and perhaps penetrate to the next galaxy. Some people aren't fond of how Obi-Wan and Anakin appear in this book, and while they are trivial, I was very impressed with how Timothy Zahn was about to translate Obi-Wan to the written word. Lastly, Zahn does a great job with the dialogue, the pacing, and other narration. His own characters (Jorj, Jorus, Thrawn, etc.) are more "malleable" in the sense that his books are the ones in which they primarily turn up, but their characters are pretty much the same as in other materials. Here, she has been C'baoth's Padawan for 10+ years, putting up with his arrogance, self-importance, and rudeness, and she becomes a mediocre Jedi? Lastly, although it is important that Thrawn learn Basic, the whole concept of the language lessons at the beginning is a little corny.

However, after reading "Survivor's Quest," I found that I was intrigued with the story of the ill-fated mission known as Outbound Flight. Really, all he does is try to foil C'boath's negotiations early in the book, confront Thrawn with a Nemoidian fleet, provide Thrawn with the equipment to fight the Vagaari and Outbound Flight, and constantly praise Thrawn for being such a noble commander. The title of book is "Outbound Flight," it claims to tell the story of a somewhat famous mission by the same name; however, most of the book is dedicated to Thrawn. It is very apparent that Zahn loves this character (more on that later), and anyone who has read his other books knows that Thrawn is associated with Outbound Flight, so he is expected to appear at some point in the story. Perhaps had Zahn dedicated more of the book to Outbound Flight, we could have seen a more fleshed out, ambiguously realistic C'boath and his fall to the Dark Side. Writing-wise, Zahn has vastly improved since "Survivor's Quest." The writing itself was actually very enjoyable to read, largely because the phrases that the author used to repeat ad nauseam are absent from "Outbound Flight." Characters don't quirk eyebrows, wince, or comment wryly on things; no one ends an argument with "Point" or "Agreed." The action scenes were well written (though I would have appreciated more of them) and most of the dialogue is well done. As if the majority of the book being devoted to this figure wasn't enough, several characters (Maris, Car'das, and Doriana) repeatedly praise the Commander for how noble, honourable, and honest he is. Maris, Doriana, and to an extent Car'das seem present strictly to praise Thrawn and be convenient for the plot. Along with Lorana, the various non-Jedi characters aboard Outbound Flight were also interesting, though I would have liked to see more of them. "Outbound Flight" is a great follow up to "Survivor's Quest" and answers a lot of questions that were presented in the previous book. Zahn's writing has improved and is very enjoyable, and the story of Outbound Flight itself is mostly interesting. However, Zahn's love of Thrawn really overpowers this novel and forces other plots (like that of Outbound Flight) to race to the finish, rather than telling their full story. The overwhelming obsession with Thrawn puts this book in the two-and-a-half star range, but finally getting to know the story of Outbound Flight, good writing, and some very intriguing characters bumps "Outbound Flight" to a solid 3 stars.