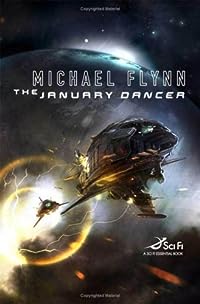 Full of rich echoes of space opera classics from Doc Smith to Cordwainer Smith, "The January Dancer" tells the fateful story of an ancient pre-human artifact of great power, and the people who found it.

Starting with Captain Amos January, who quickly loses it, and then the others who fought, schemed, and killed to get it, we travel around the complex, decadent, brawling, mongrelized interstellar human civilization the artifact might save or destroy.

I mean, it feels pretty awesome on so many levels, and yet the characters kinda fell a bit flat for me. I totally recommend this novel for the wild and weird adventure of the Immovable Force, aka the Dancer as it bends the wills and minds of entire civilizations, the world-building of the Rift, a lawless portion of space and it's civil war and so oddly Irish characters, and the sense that so much is going on that it's really hard to follow the enormity of it. Plus, there is the Immovable Force, the Dancer, too, that acts like the Spear of Destiny. Maybe I just wanted to see something more interesting happen with it, too.

There is a lot going on here to love: a sufficiently deep future history created through the liberal use of allusion that references any number of existing earth cultures (heavily relying on Celtic and cultures from the Indian subcontinent) along with some pretty swell creations of Flynns own (the Hounds, those of Name, the Terran Corners, the Rift, the People of Sand & Iron, etc.) in which the diaspora of humanity has settled across the cosmos, making use of an intriguingly pseudo-scientific explanation for FTL travel; a cast of varied and interesting characters of disparate parts coming together, as though by chance, to solve the mystery of a powerful pre-human artifact; and perhaps most of all the well-crafted prose of Michael Flynn that provides a certain shine to what might have been little more than a bloated pulp epic in weaker hands. We follow the wanderings of a group of characters as they in turn follow the peregrinations of an alien artifact able to change its shape imperceptibly (and may have other, less benign powers) that was discovered by the tramp freighter captain Amos January (hence its name, The January Dancer) as it moves from hand to hand across large swathes of known human space. The main characters (and even many of the secondary ones) are fairly well-fleshed out and have interesting motivations, the prose is very good, and the story moves along at a decent clip.

It reminded me a bit of Iain Banks' Culture books in the irreverent style of writing and the variety of worlds Flynn can just barely touch on. I may have wanted to know more but it would have needlessly slowed the narrative, and Flynn is good about giving the reader enough information to follow what's going on (though it does demand a bit closer reading than one might usually give a book like this). They track the Dancer across several worlds before finding it and confronting its power. The ULP is an extremely loose concatenation of the periphery worlds that give varying degrees of allegiance to the Ardry of High Tara, who enforces his will through the efforts of his Hounds and Pups, a highly trained policing force.

This is the second book I've read by Michael Flynn, the first being Eifelheim. And in both books Flynn feels the need to interrupt those gorgeous main stories multiple times with secondary plotlines. Now, admittedly, Ive only read a small sample size of Michael Flynns work (just two out of ten novels). If I had it to do over again (and I know there can only ever be one first time with a book, just like theres only one first kiss with a lover) Id simply ignore the interruptions and let the story of The Dancer carry me away.

In the meantime, you can read the entire review at Smorgasbook

It is quite flowery in an old literary school fashion.

I really enjoyed the way Flynn created a future that involved humans from different planets talking in different dialects. I liked how he framed the novel as a man telling a harpist the story of the pursuit of a pre-human artifact so she can create a piece of music about it.

So I abandoned it (you can't really skim a Flynn novel - you either concentrate and read every word, or put the book down) in spite of truly gorgeous writing in places. We see what a thing was when the light left it, and that was long ago. So image and reality are the same thing, after all.

I can't make that sound any less ridiculous, but it's played perfectly straight and it works great.