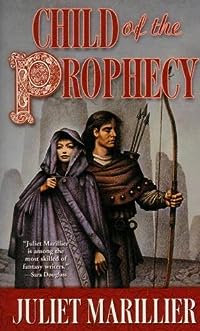 Child of the Prophecy

Child of the Prophecy is the thrilling conclusion to Juliet Marillier's award-winning Sevenwaters Trilogy.Magic is fading...

The ancient groves are being destroyed, and if nothing is done, Ireland will lose its essential mystic core.The prophecies of long ago have foretold a way to prevent this horror, and it is the Sevenwaters clan that the Spirits of Eire look to for salvation.

She is the shy child of a reclusive sorcerer, and her way is hard, for her father is the son of the wicked sorceress Oonagh, who has emerged from the shadows and seeks to destroy all that Sevenwaters has striven for.

Read the Book "Child of the Prophecy" Online

I think this book was at least as good as Daughter of the Forest, although in a somewhat different way. Fainne is, in my opinion, probably the most believable of the characters in the three books. I don't really get his somewhat slavish devotion to Fainne considering all she put him through, but he is an admirable character and any woman would be lucky to have a man like him.

This is such a hard review to write because I loved this book so much. Ive only read her original Sevenwaters Trilogy so far, but each of those books has succeeded in captivating me with a full range of real emotion. I usually avoid sad books because the emotion often feels contrived, but these are not tearjerkers. Child of the Prophecy was often not an easy book to read. I wanted to reach in and prevent her from making terrible mistakes, or do something to help her find her way. But Fainne's growth and discovery from beginning to end was a journey that I found totally worth it.

Child of the Prophecy tells the story of Fainne, daughter of Niamh (Liadans sister). Furthermore, Fainne believes herself to be cursed by her heritage, blood of the evil sorceress Oonagh (her granny), which , on the one hand, gives her powerful magic and on the other sets her steps toward a destiny of darkness. Sorcha had to, and because of the fairy-like quality of the retelling it didn't bother me, but Liadan I couldnt stomach as you know (team Niamh!). While her father gave her essential care and taught her the craft, due to Niamh early and tragic demise, there was nobody to show Fainne love or tenderness that every child needs. And this is when the whole setup comes to the fore: by her fathers decision Fainne is to be sent to Sevenwaters.

Ironically enough, I wound up loving Child of the Prophecy more than its predecessor, Son of the Shadows. As someone who left the latter feeling more than a little disappointed and was prepared to feel the same way from this installment, Child of the Prophecy proved to be a pleasant surprise. Our novel truly begins, though, when the Lady Oonagh, Fianne's grandmother, blackmails her granddaughter into infiltrating Sevenwaters and preventing a prophecy from coming true. Johnny, the son of Liadan and Bran, is the titular child of the prophecy upon which the hopes of Sevenwaters lie as they face a perilous time nearing war with the Britons, specifically the Northwoods who neighbor Harrowfield. Fianne, though recognizing the evil intents in her grandmother's plan, is powerless to stop her as the Lady Oonagh threatens to kill Ciaran, Fianne's father. It is difficult to decide if Fianne can even be considered a good person after all the evil she has done, no matter the good she does as well, but these are the precise reasons I love her character so. Without a doubt, Fianne's growth as a character is the best this series has delivered so far, and likely will be for her circumstances lend themselves to so much room for improvement. Now, however, entrusted with the Lady Oonagh's deadly task, Fianne sends Darragh away, fearful that her grandmother may threaten to harm him next. Darragh's kindness and his love give Fianne the strength to persevere on and while he isn't a leader like Red or Bran, his innocence and gentle nature are exactly what Fianne need, not to mention his loyalty and undying faith in his best friend, despite the horrors she confesses to him. In some ways, this novel didn't carry forth the same level of well-rounded excellency as Marillier's novels always do, with a few points shoddily disregarded or merely disappointing, but ultimately, one cannot deny that Child of the Prophecy is an excellent conclusion to this original trilogy. Well and truly, Child of the Prophecy is far from being the disappointment of this series.

In the Sevenwaters Trilogy so far each of the books has succeeded in captivating my interest and not for a minute did I ever think to let go of the book or forget about the story. Yes, I can see all the things that connect or influence one or the other, but while in the first book it was novel and gave the reader instant connection to the story and gave a familiar groundwork for all to feel as if they have common ground to start from, by this third book, the stories were far away from the reader's knowledge base and had little to do with effecting the story, but were just snippets of the character's reality, thus loosing their gravitas and making them close to irrelevant. All the main leading ladies are tragic in their own way, but they also carry the torch of love and hope, of looking forward without forgetting where we came from, of securing a good future while preserving the teachings and beauty of the past. In this book I particularly liked the idea that a human sacrifice is needed even when it comes to preserving what is magical and Fae, because it is part of human history as well and we should work just as actively in preserving it, since we are the most active force in tearing it down... Weird, that this is what I got out of a book in which the main character has to deal with the question "Nature or Nurture" - am I bad because my "blood" comes from bad people and is bad, or do I have the choice to be bad or good on my own and by my own deeds and paths I choose to take... She made me feel like she really did need a man to take care of her, just to keep her in the straight and narrow, and I guess I have gotten too accustomed to strong female characters and this disturbed me somehow... So, If you are a fan of the Celtic myth and folklore, and if you love some angst with your stories, this is a good series to check-out. Mow I wish you all Happy Reading and may you all find what you Need in the pages of a Good Book!!!

Fainne is a different sort of woman from Sorcha and Liadan. It made me lose a lot of respect for not only Eamonn but also Fainne, which is a bit unfair I admit, considering how manipulated she was by a grandmother who did exactly the same thing. But while Oonagh was driven by vengeance and had a clear goal in mind, that Fainne is capable of such a thing when all of her instincts tell her NO really made me question her character and morality. I also questioned her slow realization that the amulet was not a good thing. Fainne doesnt even start to question her grandmothers motives until the book is over halfway done.

However, it's a bit different in that Fainne's rather scandalous parentage (scandalous even by today's standards), her rather withdrawn personality, and her very powerful magical talents make her an outsider and an object of mistrust to many of the characters we know and trust from the first two novels. This book starred a new type of character, but the theme of strong women making big, world-shaking decisions shines through, and remains true to the rest of the trilogy.

I'm continuing to love this series and so happy that I still have three books to read!

Juliet is the author of twenty-one historical fantasy novels for adults and young adults, as well as a book of short fiction. Juliet's novels and short stories have won many awards.