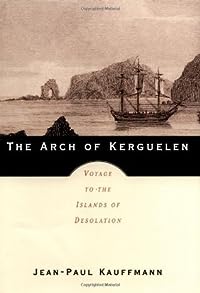 The Arch of Kerguelen: Voyage to the Islands of Desolation

The Kerguelens - isolated French islands in the southern Indian Ocean - were the home of the Arch of Kerguelen, a 1,000-foot-tall stone vault that had confounded navigators for centuries. Jean-Paul Kauffmann finds poetry in the isolation and strangely serene beauty of this land far from the hustle of "civilized" life, where the vast ocean dominates, where the wind reigns and solitude is interrupted only by animals scrambling in the windswept fields by the graves of those who journeyed there before.

Read the Book "The Arch of Kerguelen: Voyage to the Islands of Desolation" Online

French journalist Jean-Paul Kauffmann's 1993 The Arch of Kerguelen, originally published in 1993 by Flammarion of Paris and translated by Patricia Clancy for a 2000 publication by Four Walls Eight Windows, might be the only books I've ever read on the Kerguelen Islands. There have been, as Kauffmann enumerates, innumerable plans to humanize the islands, starting with discussion in the salons of pre-Revolutionary Paris on settling dozens of luckless Acadian families in this open land.

This book is neither a travelogue (in the usual sense), a natural history treatise, nor a serious historical overview of the French islands of Kerguelen (also called Desolation Island.) Although there are some evocative phrases that approach description (for example, "it's the land of 'the eternal late autumn.'"), author Jean-Paul Kauffmann never seems to get around to actually describing much more than the ever present wind. One hopes that the next adventurer to Kerguelen arrives with an actual sense of adventure and the descriptive power to pass it on.

I came to this work after a life long curiousity about Kerguelen and found it very satisfying and packed with information about the islands and the history. In short, whatever the authors past, this book is about Kerguelen and those who are drawn there, and it is unfair to the writer to accuse him of writing about something else.

It's too bad the Desolation Islands moniker didn't stick, though Kerguelen's behaviour was certainly not ideal.

I've long had a fascination with the Kerguelen Islands, so I was thrilled to find this book aboout the place. In the beginning of the book I felt irritated with what I took to be whining--he was an intelligent and articulate whiner, but spent a great deal of time complaining nonetheless. He describes the landscape and feel of Kerguelen beautifully, and the book has interesting musings on deeper issues such as ownership, nature, and exploration. I'm grateful he took the time to collect the information and write the book. Pain keeps one occupied; the person who suffers sees himself in his torment. I know that at the end of my life, only ten or so books will have been really important." -p41 "The Kerguelen wind never whistles. I feel as though gusts of wind are hitting our backs like falling stones. This valley I thought was dead taught my why the origin of hte world is in the wind." - p51 "Looking at the sky unites the two principles on which our human condition has always been based: hope and the unexpected." - p 73 "When you have lost everything, you can create abundance in your mind; posession has only ever been a matter of the imagination. You can park anywhere as long as you are careful to have the door facing into the wind.

This travelogue takes the reader to a most desolate and distant place, Kerguelen Island in the southern Indian Ocean. Today the only settlement is Port aux Francais, a large research center maintained by the French government. Earlier attempts to settle on Kerguelen Island failed (though hope remains the current salmon hatchery will prove viable): twice whalers established a station here, and Frenchmen have tried to support themselves here by raising sheep. By and large, the windblown volcanic land is still empty, and the original name "Desolation Island" remains as appropriate as ever.