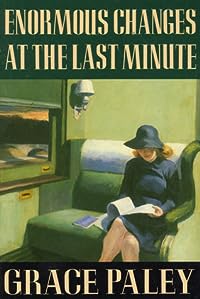 Enormous Changes at the Last Minute

Seventeen stories written over the past fifteen years reveal the author's vision of human love and tragedy.

Read the Book "Enormous Changes at the Last Minute" Online

-- Okay, so now I've read some Grace Paley (and a little Chekov too, actually), and I'm not sure what I'd expected, but this wasn't it. I'm sort of surprised I somehow hadn't read them before, since there's so much about them that's exactly the kind of thing that I like. I know this is the kind of Thing people get really defensive about, so if you really feel like this doesn't apply to you, rest assured that you're probably not who I mean here. But some of you guys (mostly GUYS) need to take a hard, cold, sobering look at the first names on your bookshelves, and think seriously about why you read so few women writers. I think this is the reason why Grace Paley's stories surprised me -- I was expecting something else, something less cool, because she's a Woman Writer with two capital Ws, and we're all scared those books are going to be like Little Women or something. Okay, I shouldn't say that, because I actually haven't read Little Women.... I remember when this guy I used to hang out with read Toni Morrison for the first time, and he was just shocked because her writing was nothing like how he'd expected. But that's not what people who haven't read her are imagining, because her name is Toni-with-an-i and because she's BFFs with Oprah's Book Club. But similarly, Oprah's Book Club isn't what a lot of people are imagining. I think a lot of otherwise intelligent, thoughtful men -- and also many women -- have this unexamined impression that they wouldn't like most books by women. Maybe it's partly because women writers are more likely to write about women, and traditionally female concerns, and a lot of people (men and women alike) believe on some level that this is a less interesting and important than books that are primarily about men and traditionally male spheres.

Nowhere is there the opportunistic grace of Let the Great World Spin, easier on the eyes and less real to the senses if I think back on my three-and-a-half year stint in LA. ROBBING, MURDER, and PUTTING HEROIN IN YOUR BLOOD is bad. He had once killed a farm boy made crazy by crowds in the city. Too many people, he screamed when he killed. In less couched terms, Paley doesn't fuck around, what with her style narrowing into the heart of things without the comfort of all enclosing barriers, making us multitask in paying attention and plying imagination at tenfold plus the pace of the usual prose (spoonfeeding us ideologies and cringing back from every accidental increase of force in expectation of the spit).

These stories make me feel like writing and storytelling are important, which is something I occasionally need to be reminded of. Within the first five pages, I'd already put the book down twice--the second time, which I added as a GoodReads quote, in the story "Debts," with the sentence "There is a long time in me between knowing and telling," and the first time, in "Wants," because of this: "He had had a habit throughout the twenty-seven years of making a narrow remark which, like a plumber's snake, could work its way through the ear down the throat, halfway to my heart.

I feel like I have known Grace for a long time even though I am just recently rereading some of her short stories. Paley captures a very quickly changing New York - and America - with her mostly unwed mothers raised in socialist households and trying to raise good citizens in a Vietnam War era (only as distant background) urban life, complete with rising concerns on over-population, pollution, crime, the downslide of American education and all that the future might become in such an atmosphere Grace Paleys stories are quirky, a little oddthe way she manipulates the language is a little out there, and I will always be fond of the puzzlement that comes over me when Im reading herespecially her shorter work (two to four pages). Like her first book of short stories, The Little Disturbances of Man, I give this one five stars. I read this collection of short stories as a part of Grace Paleys book The Collected Stories . I am delighted to get Paleys three short story collections all in one binding.

It's attributable, probably, to her unmistakable voice that tends to become a little laborious by the book's end.

I feel kind of like a sucker, giving Paley's second collection five stars. Faith, presumably Paley's stand-in, narrates numerous stories, and her sons and husbands and boyfriends drift in and out of conversation, although only her son Richard makes his presence feel concrete. I feel like these stories are really part of a big novel, or they add up to a novel, or they're better than a novel.

In "Conversations with My Father," the narrator's father wants her to tell a simple story about simple people, like a story by de Maupassant, and she says, "I would like to try to tell such a story, if he means the kind that begins: 'There was a woman ...' followed by a plot, the absolute line between two points which I've always despised.

I found most of the stories quite hard to follow, frequently losing my train of thought, and I'm not particularly a fan of stories in general that are incredibly heavy on the dialogue and less so on plot.