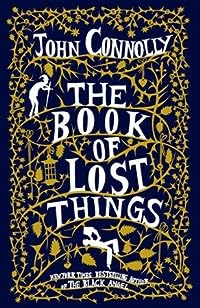 The Book of Lost Things

But those books have begun to whisper to him in the darkness.

Angry and alone, he takes refuge in his imagination and soon finds that reality and fantasy have begun to meld.

Read the Book "The Book of Lost Things" Online

Very cool and immersive, and a bit dark.

My feelings for this book surprised me after my intensely passionate, torrid love affair with The Child Thief. PLOT SUMMARY: Set in England at the outbreak of WWII, young David loves books and stories. David is given the room of Roses uncle, Jonathan Tulvey, who shared Davids love of books and stories. The books in Jonathans room are old and full of ancient stories and many contain odd notes written by Jonathan. He spends more and more time among the old books which begin to whisper to him and David starts to witness strange occurrences, including the appearance of a crooked man watching him. Eventually David finds himself in another world where dark, grim versions of classic fairy tale characters exist but are nothing like the way they are normally portrayed. THOUGHTS: The beginning of the story takes its time to develop, but this leisurely pace didnt bother because Connolly does an amazing job with it.

I don't look at this book the way some readers apparently have: as sci-fi or fantasy, but instead see it as showing the redemptive power of books and stories in children's and adults' lives.

It created a magical and fairytale atmosphere and pulled me right in. One thing is for sure, John Connolly can write. A few chapters in, when the main character left reality for the parallel fantasy world, I wasn't sure this magical atmosphere would hold. Luckily, Connolly managed to keep the atmosphere from crumbling and built an incredible and dark tale, based on many familiar characters and stories from popular fairytales. After a time we get to know him a little better and find out that he is looking for someone, another knight, whose picture he keeps hidden in a locket around his neck.

The book begins by introducing us to 12-year old David who has just lost his mum. That is when he first sees the Crooked Man. One late night, David hears his mum's voice calling out to him, asking him to come rescue her from something horrible. Now, David has to find his way back by searching for the Book of Lost things with the help of the Woodsman and the brave Knight Roland, while escaping the werewolves and the ever-lurking Crooked Man, who follows him everywhere he goes.

I almost laughed aloud when I read sentences along the lines of: 'And that was when David truly transitioned from boyhood to manhood.' Whatever happened to the old-fashioned show, don't tell rule of writing?

"Lost Things" centers on David, a boy whose mother dies and whose father remarries and has a second child, leaving David to bicker bitterly with his new stepmother while trying to avoid anxiety attacks that leave him blacked out and feverish. The second chapter focuses on the father's remarriage and David's anxiety attacks leading the reader to believe, perhaps, this is the focus of the story - it is not. The third and fourth chapters center on David's mostly absent father whose work is "top secret" and David's fights with his step-mother and we, the audience, raise our index fingers and say, "Ah-ha! The real story ends up being David's abduction into the land of fairy tales by the Crooked Man, a Rumpelstiltskin who makes vicious bargains with emotional children to feed his magical slave house. As for me, I was insulted that David begins the story emotionally wounded by what he views as a betrayal by his father and, instead of finding closure, he learns to just get over it and "be a man" about it. But a bigger insult, in my eyes, was the closing of the book - Connolly is so in love with his work that he follows up the main story with almost 150 pages of notes and commentary on his story: everything from the origins of the fairy tales he parodies to his woeful recollections of scenes that were cut from the final draft (murder your darlings, Connolly!).

If you should try, with best intentions, after reading numerous glowing reviews and having heard Connolly's name bandied about the bookish world, to gift this one to a ten-year-old, expect stern words and doubts of judgement. In fact, it does bear a strong resemblance to the writing of the dear Brothers, which is not a been a bad thing if one enjoys the flagrant telling and the elaborate language of fairy tales. Another contained a woman's hand, a gold ring upon its wedding finger, red varnish flaking slowly from its nails." It begins with narrative we can all get behind, a long tradition in English country houses and cracks in the garden walls, and a young man--almost adolescent--embarking on an adventure. Except this adventure is framed by three salient grimnesses; the death of his mother, the father remarried/subsequent baby brother, and World War II. The young man, David, journeys through the crack and falls into a land that is fairy-tale twisted. Rescued by a Woodsman, he embarks on a journey to see the king, gain insight from The Book of Lost Things and hopefully return to his own world. They make better sport, and better trophies for my wall, for they are beautiful." A wonderful, traditional format; journey to Oz and to home, but Connolly lets it unwind more than a bit toward the end, as he indulges in descriptions of The Crooked Man's evil deeds, in a way that really doesn't matter to the story, and just serves to point out the horrors of the world. This book is indeed about Lost Things, the most lostest being childhood itself, except in this version of childhood, what David leaves behind is fantasies of his mother and his first family, not idle days exploring wardrobes, or playing at sword-fighting, or looking for moon-paths. "Most of the children David knew had by now left the city, thronging train stations with little brown luggage labels tied to their coats on their way to farms and strange towns.

John Connolly was born in Dublin, Ireland in 1968 and has, at various points in his life, worked as a journalist, a barman, a local government official, a waiter and a dogsbody at Harrods department store in London.