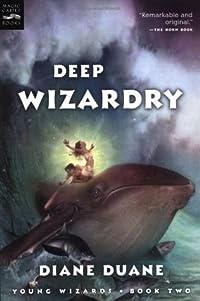 Only, this wizard is a whale, and she needs the two teens to join a group of whales and dolphins in an ancient underwater ritual.

But performing the Song of the Twelve is not easyand there are things in the ocean more dangerous than even the Lone Power, such as the enormous Master Shark.

If ever anyone asks you what exactly is the point of a site like Goodreads, do please direct them to this review. But when I posted this in my Goodreads review, a friend begged me to carry on, because this, the second book in the series, was one of her all time favourite books. This is a children's (or perhaps more properly a young adult) book, the second of a long series, but it's also an excellent read for adults.

After reading and absolutely loving the first book in the series "So You Want to be a Wizard" I just knew I had to read the second book, "Deep Wizardry". There were several times where I almost put the book down altogether because of the extremely dull story line and horrendously slow (slower than molasses) pacing.

First off, let me say that I have been trying a "straddling" technique in reading these; I have been alternating between listening to the (fantastically charming) audiobook for my commute to work and then switching to my paperbacks (which I hastily and excitedly purchased from Orca Books in Oly for a song on store credit) for my 15-minute work breaks in order to continue the story. I can safely say that I have been impatiently shelving books during my shifts, thinking about my next chance to read about my "leetle wixxards" and then shuffle the stories on to my friend Pietro so I will have someone to giggle and squeal with. It is lovely how Nita and Kit both seem to actually care what their parents think about them and don't want to lie to them, both for personal and practical reasons of their wizardry and "speaking truth." Charming and different. (As a sidenote, Nita's mother and little sister seem to be viewing her adventures with her friend with some suspicion in the book, but other than one conversation, I didn't find myself too shocked by the direction their minds took. I found it terribly insulting on the front that a) the author seemed to think pandering to me was appropriate rather than being realistic or fair about how people actually act b)it is very diminishing of the achievements and adventures young people have if the adults don't pose any kind of threat to their options as young characters and thus it felt like "making it easy" for the kids by reducing the challenge. Nita's parents are an actual concern in the story, both for practical reasons as for emotional ones.

While I regretted last time around that I had not encountered Diane Duane's Young Wizards books when I was a young'un, this time around I'm pretty glad I didn't, because if I'd come across Deep Wizardry when I was the age of its two young protagonists, I would have required extensive therapy afterward. I'm having trouble breathing after just having typed those words.* Fortunately, I'm a grown up now, and have evolved and developed coping techniques for dealing with scenes like the GIANT SQUID ATTACKS YOU GUYS and am thus somewhat capable of admiring that scene for the majestic and badass bit of action writing that it is. I'm still very glad I put this book down to sleep last night well before the advent of the GIANT SQUID ATTACKS YOU GUYS or I wouldn't have slept at all and would probably have to be hauled off to a mental ward like one of H.P. Lovecraft's less strongly-constituted wus-heroes. Soon it's those responsibilities -- as I observed last time around, Duane's version of magic has a heavy ethical/ecological bent and literally preserves the world -- that come crashing to the fore like a tidal wave when the duo meet up with a badly injured humpback whale, who turns out to be a young wizard herself, and who has just lost her mentor at the worst possible time.

For example, Nita wore glasses in the first book, but not in the rest of the series. A minor point, but its nice to tie the books more closely together, especially when you are reading them as a series and not as stand-alone novels. Nita is warned to read the fine print, but she agrees to participate in the Song of Twelve and to play the role of the Silent Lord without realizing that it is not a play, it is a re-enactment, and that whoever plays the Silent Lord really does die. Nita is 13she doesnt want to die, she is frantic to find a way to live, but if she doesnt do what she promised she would do, millions of people will die.

(I love that so much, it's the origin of one of my domain names.) One of the things I enjoy most about the Young Wizards series is that Diane Duane does her best never to talk down to her readers, even though it's YA.

Diane Duane has been a writer of science fiction, fantasy, TV and film for more than thirty years.