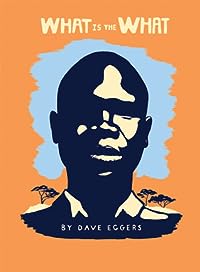 What Is the What

From the bestselling author of A Heartbreaking Work of Staggering Genius, What Is the What is the epic novel based on the life of Valentino Achak Deng who, along with thousands of other children the so-called Lost Boyswas forced to leave his village in Sudan at the age of seven and trek hundreds of miles by foot, pursued by militias, government bombers, and wild animals, crossing the deserts of three countries to find freedom.

Read the Book "What Is the What" Online

The story of Valentino Achak Deng, a so-called Lost Boy of the Sudan, is so moving that after reading the book I went to his web site and signed up for information on how I can help the cause. The writing is brilliant and the story is compelling...but I think what makes the book so great for me is the sheer tragedy of this boy's life and the unbelieveable sense of courage and optimism he showed throughout a life that would have caused most people to simply give up. He could have easily played the story as a straight biography, but instead Eggers weaves Valentino's life together in a beautiful way -- going back and forth between his time in Africa and his new life in Atlanta. When I read The Kite Runner, and even Hosseini's second novel A thousand Splendid Suns, I thought life was terrible for the Afghans -- but Valentino's real story makes the fictional story of the boys in The Kite Runner seem tame by comparison.

It takes a certain and rare kind of writer to make a story about civil war, genocide, and a refugee crisis boring and unreadable; that writer, specifically, is Dave Eggers. At points it reads like a parody of an American trying to imitate an African (oh, wait, it is, although Dave Eggers has probably at least met some, so I don't know what his excuse is). No one is allowed to be cowardly, or funny, or petty, or squabbling - everyone must be stoic and long-suffering, because they are Noble Victims, and that is how Noble Victims are supposed to act (in real life, many people who go through tragedy tend to develop dark, savage senses of humor, but you wouldn't know that from reading this). Eggers writes like he just wants to get it over with. After all, young Valentino's story would have remained untold - if it were not for the Deus Ex Maquina of Dave Eggers, who tells it like no one else can. If you think I'm being too harsh, then ask yourself this: why didn't Eggers just write a nonfiction book, or a straight up biography of Deng? At points, I'm tempted to think that it's because he couldn't be bothered to do some basic research (i.e., the repeated references to "Darfurians"; "Darfur" means "The Land of the Fur," the Fur being the people that live there, so this is sort of like referring to Polish people as "The People From The Land of the Polish." Also, the 1997 death of Princess Diana for some reason seems to come in the plot well after the 1998 African embassy bombings).

Ive been thinking a lot about this book this morning. I read this before I joined Goodreads - in the days before I wrote reviews. But Id like to share a little about this book. It was horrific how the Lost Boys lived day after day in Sudan- starving - being chased from village location to the next - disease - killing - etc....and there is another appalling story to read about as well. Its a novel that reads like a memoir.

This is one mans true story of the Lost Boys of the Sudan. Valentino Achak Deng, at age seven, and thousands of boys just like him, endured all manner of hardship as they fled their homes as civil war (beginning in 1983) devastated their country. Although it says novel on the spine, as Dave Eggers subject states, his earlier life had to be fictionalized to condense the story and fold characters into one another for narrative flow.

TOO MUCH, AND NOT ENOUGH : A PARADOX With her open and confident sexuality, she was the constant igniter of everything flammable within us Hmm, if this Sudanese refugee & now American Valentine Achak Deng can turn a phrase like that, how come he needs Dave Eggars to shape his book and cop the byline? So what about this: "I had feared for a long time that secretly Tabitha was well versed in the ways of love and that the moment we were alone she would want to move too quickly." Now this sounds like the authentic voice of an African trying to speak of delicate matters in his second language to me, and comes off as horribly stilted, but understandably so. Okay, so no Dave Eggars there, that's pure Valentine. Now since it's the clunky uber-sincere stilted voice which tells 98% of this long tale, why is this book not bylined like all those celeb autobiographies - "by Valentine Achak Deng, as told to Dave Eggars". But would God allow such evil just for the sake of human free will, I mean, does that justify all this agony?

It's not a REAL autobiography, because if it were, it would be all about Dave Eggers. Now the narrator of the autobiography (or, the fictional entity that Dave Eggers was conjuring up when he was pretending to be Achak) ... But as a READER wanting to hear the story of Valentino Achak Deng, I want to know about that stuff. For example, from reading the book, I would think this is the autobiography of an atheist. Maybe the real VAD wouldn't have discussed philosophical matters in such a public forum as a book, and maybe that's why Dave Eggers, in pretending to be Achak, left these kinds of discussion out. But I wish the real VAD would come out and write his autobiography so I could find out. Honestly, I think the real VAD could do a much better job of writing his autobiography than Dave Eggers did of pretending to be him. a) The portrait of Achak's life in southern Sudan before the fighting began, where his prosperous father owned a shop and had many wives; and there were various religions (Catholic, Muslim, and African/pagan/something?) intermingling somewhat peacefully; where he was loved by his mother in the yellow dress, played with William K and Moses, and would try to spy on Amath and her sisters b) Achak's first visit at Phil and Stacy's house, when a bunch of other Sudanese came in for dinner uninvited, and the ensuing story of Achak's friendship with Phil's family c) Achak's running escape, as a 6-year-old boy, from the fighting d) The story of William K walking with Achak e) Moses' story about being captured and turned into a slave f) The story told by the old man who was brought by the SPLA to speak to the Kakuma refugees about being the lone survivor of an attack on all the chiefs of the local tribes g) The friendship between Achak and Noriyaki h) The story of a woman who comes to Achak's adopted family's home in Kakuma with news for Achak regarding his biological family i) Achak's experiences on the drama group's trip to Nairobi when he gets to stay with Mike and Grace and go to the shopping mall with Tabitha j) The last week of Achak's time in Kakuma, and his weeks spent in Goal waiting for a plane to take him to America.

But that does not mean that I don't admire Valentino, or that I believe his story (and that of Sudan) should not have been told.

Dave Eggers more or less avoids cheapening his subject, weakening his message or losing credibility for the duration of a book comprised of stories that would tempt a narrator with less integrity to deploy every variety of manipulative, sensationalist, suspenseful and tear-jerking prose. A book like this is supposed to raise awareness, to sensitize people and to encourage action. To the extent that this book makes it harder for people to be idle or disinterested in the face of circumstances like those in the South of Sudan, it is successful; to the extent that it prompts people to take action about such circumstances, it is impressively so. Nor am I entirely comfortable with the narrative tactic of making Achak Deng directly address different parts of his story to whichever American seems to be disappointing him in the contemporary portion of What is the What.

I didn't get to it for so long in part thanks to reviews on here that called it boring, unreadable, a mess, lacking structure and characterization, on and on, all of which I can now officially deem sort of nutso -- more a result of Eggersfraude most likely than anything else.

Dave Eggers tells Achack's story much like you would hear it if you had befriended the Sudanese refugee yourself. this book is like a conversation with a good friend. it's just that i haven't had a conversation like this before, one that starts with a burglary in Atlanta, draws you back to a small village in soutern Sudan, and marches you in and out of Ethiopia, the jungles, the rivers, the lions stare, over the bodies, into the refugee camps, into love, out of heartbreak. what i am left with is the word war, how small it is. give us a better world to match this boy.

And the Prophets, Do They Live Forever?, The Circle and A Hologram for the King, which was a finalist for the 2012 National Book Award.