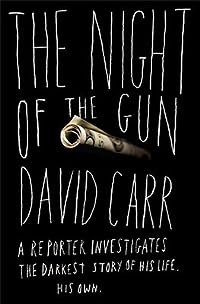 The Night of the Gun

In "The Night of the Gun," David Carr redefines memoir with the revelatory story of his years as an addict and chronicles his journey from crack-house regular to regular columnist for "The New York Times." Built on sixty videotaped interviews, legal and medical records, and three years of reporting, "The Night of the Gun" is a ferocious tale that uses the tools of journalism to fact-check the past.

Carr's investigation of his own history reveals that his odyssey through addiction, recovery, cancer, and life as a single parent was far more harrowing -- and, in the end, more miraculous -- than he allowed himself to remember.

Over the course of the book, he digs his way through a past that continues to evolve as he reports it.That long-ago night he was so out of his mind that his best friend had to pull a gun on him to make him go away?

A visit to the friend twenty years later reveals that Carr was pointing the gun.His lucrative side business as a cocaine dealer?

Not all that lucrative, as it turned out, and filled with peril.His belief that after his twins were born, he quickly sobered up to become a parent?

Nice story, if he could prove it.The notion that he was an easy choice as a custodial parent once he finally was sober?

He set out to become a nice suburban alcoholic and succeeded all too well, including two more arrests, one that included a night in jail wearing a tuxedo.Ferocious and eloquent, courageous and bitingly funny, "The Night of the Gun" unravels the ways memory helps us not only create our lives, but survive them.

Read the Book "The Night of the Gun" Online

However, a lot of the words Carr uses, I just do not get--in either meaning or context. Carr also uses an overabundance of these "big" words in the same paragraphs, or even sentences. Carr also seems to have trouble forming his own thoughts; while I like quotes and references to philosophers, etc, Carr often quotes or refers to other authors and philosophers several times alone within the first two chapters--and again, often in the same paragraph.

There are so few ways to deviate from the addiction memoir outline, short of posthumous publication. This has to be the most honest addiction memoir Ive ever read. Maybe its because Carr is so committed to the best truth he can find, or because his teeter from 14 years of sobriety was so seamless a simple hand-to-mouth muscle memory, almost that this doesnt memoir doesnt necessarily feel like him riding off into the sunset. An addict is an addict, he gets this: I could be drunk tomorrow or shooting dope even as you read this, but the chances of that are low as long as I make a daily decision to embrace who I really am and then be satisfied with that at the end of every day, he writes. But when the NY Times reporter is outed for falsifying stories, Carr chases him down and begs him to not fall off the wagon in this moment. Maybe Carr is considering the reputation he built as a journalist, later doused in kerosene, and through the virtue of hard work and forgiveness, was able to resuscitate.

I've read some reviews that have whined about wanting more about why Carr drank, why he drugged, that whole tearing-the-skin-off-your-heart bullshit that is forced down our throats on a regular basis whenever we pick up an addiction memoir. If we expect others to read the stories of our lives, we must ruthlessly and as objectively as possible examine our life and consider, on a daily basis as we write, that our version might not be the correct version after all.

So I completely understand David Carr's impulse, upon leaving rehab and beginning his sober life after a sordid few years of crack/cocaine abuse and abuse of women, to detail his addicted past in his resumes and cover letters and to eventually write a book. Carr describes this well in his brief relapse with alcohol towards the end of the book. One thing that impressed me about the book was that Carr's twin daughters were his impetus to change. I can tell you from my time spent in rehab among addicts that this is the exception, not the rule. I understand that that part of the book is necessary -- to go from addiction to the New York Times is kind of a big deal.

I cant speak for the world, but this is probably only the third such book Ive read so I, for one, arent burnt out on them yet. Yes, Carr did some absolutely horrifying stuff under the influence of drugs.

The first half of the book was hard to read. He even mentions this possibility, how the reader may not like him, and then sets up a scenario wherein he tries to formulate a tender response to a horrific event - I beat my girl friend, but I took care of our babies.

This book is the work of a self-aggrandizing narcissist who possesses both an unflinching honesty in recounting his addiction history but also no small measure of blindness as to how his own privileged position as a white male member of the press allowed him his many chances for self correction. While interviewing one of his former victims, they both laugh awkwardly at the memory he has of holding her arms over her head while beating her face in an "oh look what drugs made me do" moment that absolves him of any personal guilt in terrorizing a woman he purported to love. Additionally he attempts to indict the testimony of the only woman who does hold him responsible for his lies and violence by repeatedly pointing out that she was also an addict and that she, unlike the heroic narrator, never managed to get her act together and is still struggling to this day. That while purporting to be an honest narrative of his own descent and recovery, it is still constructed by an author that desires to be liked by his reader and so grants himself a pass to spin or softball some events I see as highly problematic.

The concept is excellent: approaching a memoir from the perspective of a journalist.

Stories retold become mythologized, sins he can't bear to see forgiven absolve themselves through forgetfulness, and the question of who pulled that gun on whom becomes more existential than whodunnit. Carr shows that memory becomes a biased informant, whispering that things weren't so bad, not our fault, and yet the truth can be found for those daring enough to confront it.

David Carr was a journalist who wrote for The New York Times.