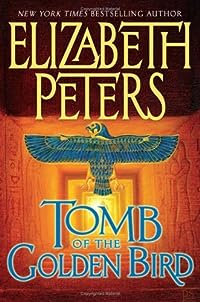 Tomb of the Golden Bird

Convinced that the tomb of the little-known king Tutankhamon lies somewhere in the Valley of the Kings, eminent Egyptologist Radcliffe Emerson and his intrepid wife, Amelia Peabody, seem to have hit a wall.

Having been banned forever from the East Valley, Emerson, against Amelia's advice, has tried desperately to persuade Lord Carnarvon and Howard Carter to relinquish their digging rights.

Read the Book "Tomb of the Golden Bird" Online

I am bummed to observe that the next installment in the long-running Amelia Peabody series, which has been near and dear to my heart for ages on end, really rather feels the same way. If you've been reading the Amelia Peabodies, you know that all the novels from about halfway through the series onward alternate between first-person POV for Amelia and third-person for her son Ramses. Between these two little screwups and the overall flatness of the prose, it just really made the book not feel like Peters at all. While I do appreciate how Peters arranges things to respect actual history and keep them out of the direct limelight with those goings on, it also made for kind of frustrating reading--since you only really got to see the wonders of what was in that tomb in brief and scattered glimpses. For one thing, Peters is now 80 years old, and that's a venerable age indeed to still be writing, especially working on your eighteenth book in a long-running, best-selling series (not to mention HOLY CRAP, eighteenth book, how on earth do you keep the series lively after so many installments?). Last but not least it is worth mentioning that according to things I've read, Peters has announced that she won't write any more Amelia Peabodies after the 1922 discovery of King Tut's tomb...

Edwards, Lady Hilda Petrie: the wife of British Egyptologist Sir William Flinders Petrie, and is semi-autobiographical, laced with the feminism and feelings of a woman who was a pioneer in her time, receiving a doctorate degree from a prestigious university in a decidedly unfeminine subject in 1952. Amelias husband, Radcliffe Emerson, is inspired by Sir William Flinders Petrie. The only main characters which were inspired by real people are Amelia Peabody (based on Victorian amateur Egyptologist Amelia B. Amelia Peabody Emerson by Suzanne Snyder Elizabeth Peters, herself an accomplished Egyptologist with a Ph.D. in the subject from the University of Chicagos Oriental Institute. As Elizabeth Peters (cobbling together the names of her two children) she conveys her immense knowledge of the subject to us in a witty, easy-to-understand style, mostly through Amelias succession of journals In the pages of the Amelia Peabody Mysteries, we also meet real historical persons, such as Gaston Maspero, Sir Evelyn Baring, Howard Carter, and Emil Brugsch, voices of the archaeological community in the late nineteenth century and early twentieth centuries. Amelia Peabodys character, however, was based more closely on that of Lady Hilda Petrie, the wife of British Egyptologist Sir William Flinders Petrie. According to the Web article Digging up Clues with Amelia Peabody (Emerson), by L.G., Hilda Petrie took off her skirt before being lowered into the interior of a pyramid; further items of clothing were removed as she and her husband explored the inner chambers. The Emerson brothers excavations at Amarna, Elizabeth Peters tells us in an Authors Note at the beginning of Crocodile on the Sandbank, were based on those of Hilda Petries husband, Sir William Flinders Petrie. Elizabeth Peters has also written 27 books under another name, Barbara Michaels. For example, the excavations that Emerson and Walter are undertaking at Amarna in 1884 (in Crocodile on the Sandbank) are based on those conducted by Sir William Flinders Petrie in 1891. Peters has indicated that the character of Radcliffe Emerson is based in part on Petrie, whose meticulous excavation habits were legendary and set a new standard for archaeological digs. The character was also semi-autobiographical: pressures on Amelia to marry and abandon her Egyptological career in the first book were based on Peters's own experience in academia. In a 2003 book talk at the Library of Congress, Elizabeth Peters revealed that her overall plan for the Amelia Peabody series was to continue the series chronologically through World War I and end with events surrounding the discovery of the tomb of Tutankhamun in 1922. As the series continued, there was no way I could get around this, or fudge the date of Ramses' birth, or keep him and his parents from aging a year every twelve months."1 According to this timeline, Amelia would be seventy years old in the eighteenth book, Tomb of the Golden Bird.

In the 18th book of the Amelia Peabody series, we join the archaeological Emerson family in 1922 Egypt for another digging season. I enjoyed discovering how Amelia manages to get in on the excitement of the discovery and how she and Emerson refuse to be thwarted by Carnavon and Carter.

Reading chronologically this is the last book in the series, and I found that quite sad. There's still a lot to like but some problems decreased my reading pleasure.

They are a bit of a loss, however, as David has decided to stay behind in England with his family and career as an artist/illustrator and all the staff they've ever hired turn out to be murderers or victims of murder. When they finally achieve success beyond their dreams, Emerson burns bridges with both Carter and his patron and so the Emersons are banned forever from viewing the incredible new tomb, let alone helping with the work. Amelia sets her mind to figuring out another mystery, one that may involve a certain roguish family member. The archeology plot is certainly fascinating but it gets boring once Emerson loses his temper. I love the tender, private moments between Amelia and Emerson. I find her constant attempts to pick a fight just to initiate more private interludes a little annoying after a time. Amelia is so smug and a bit overconfident at times but that's who she is and why we love her. Emerson's temper really gets the better of him this time. David John is sweet but a little overly precocious. David's story surprised me. As always Selim, Daoud, Fatima and Kadija are loyal members of the family who add another layer of richness to the story. Jumana has turned into a lovely young woman, dedicated to her profession but some of her petty behaviors here show she is still young and a bit immature. Cyrus and Emerson have some newcomers on staff. Kevin O'Connell returns for a story and gets on Amelia's nerves. I don't like it any more than Amelia but he seems to respect the Emersons. The Emersons are immortal and while they may not have any new adventures in the pages of books, I like to think of them carrying on and every time I see a new discovery about Ancient Egypt, I think of the Emersons and know they had a hand in it!

I had no college, and through Vicky Bliss and Amelia Peabody I was inspired to learn who John Donne and Howard Carter were, to read Shakespeare and listen to Handel, and to reach for independence. I went to college in real time, learned more about the references in her books, gained even more inspiration, and kept writing.

I don't usually read cozy type mysteries but I plan to look into more of this series.

The idea that Sethos could love her never feels very believable, and it never gets better. I wish I had not read this book. It left a taste of ashes in my mouth, after 20 years of reading and loving Amelia and her family.

Lord Carnarvon was a British aristocrat and amateur Egyptologist who sponsored Howard Carter's excavations, leading to the discovery of King Tut's tomb.

Elizabeth Peters is a pen name of Barbara Mertz.