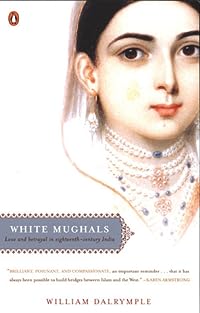 White Mughals is the romantic and ultimately tragic tale of a passionate love affair that crossed and transcended all the cultural, religious and political boundaries of its time.James Achilles Kirkpatrick was the British Resident at the court of the Nizam of Hyderabad when in 1798 he glimpsed Kahir un-Nissa'Most excellent among Women'the great-niece of the Nizam's Prime Minister and a descendant of the Prophet.

Eventually, while remaining Resident, Kirkpatrick converted to Islam, and according to Indian sources even became a double-agent working for the Hyderabadis against the East India Company.It is a remarkable story, involving secret assignations, court intrigue, harem politics, religious and family disputes.

But such things were not unknown; from the early sixteenth century, when the Inquisition banned the Portuguese in Goa from wearing the dhoti, to the eve of the Indian mutiny, the 'white Mughals' who wore local dress and adopted Indian ways were a source of embarrassments to successive colonial administrations.

William Dalrymple unearths such colourful figures as 'Hindoo Stuart', who travelled with his own team of Brahmins to maintain his temple of idols, and who spent many years trying to persuade the memsahibs of Calcutta to adopt the sari; and Sir David Ochterlony, Kirkpatrick's counterpart in Delhi, who took all thirteen of his wives out for evening promenades, each on the back of their own elephant.In White Mughals, William Dalrymple discovers a world almost entirely unexplored by history, and places at its centre a compelling tale of love, seduction and betrayal.

A grand, slow-moving procession through 18th-century India Stately processions are a leit motif in William Dalrymple's epic account of a doomed love affair between James Kirkpatrick, a British East India Company resident, and Khair un-Nissa, great-niece of Hyderabads chief minister. Dalrymples account is ostensibly a story of the love affair between James and Khair, but their relationship unfolds before the great tapestry of politics and intrigue that was late 18th-century India. Dalrymple obviously loved researching the book, and as he makes it clear in his introduction, he was most fortunate to unearth previously unknown sources and in particular to find the key to deciphering encoded letters between James Kirkpatrick and his brother William. James Kirkpatrick was one of a number of notable White Mughals, British East India officials so sympathetic to local customs and Indian cultures that often they converted to Islam or Hinduism, usually before wedding Indian women. In many ways the exploration of the complex workings of the British East India Companys policies, military campaigns, and economics is just as central to the book as the similarly complex fate of James and Khair, the star-crossed lovers.

Anyone with a serious interest in the history of the Indian subcontinent, or the British empire, or colonial history in general should read this book.

The plot of the book is woven around a love tale of a British Colonel and a high born local Muslim lady.. But the way the writer builds it is charming ..

So here is my review of the book: 1) As always, my recommendation is that ONLY if you are a history buff, pick it up. It is a detailed documentation of Mughal, Hyderabadi, and English era, and you don't want to be embroiled in a story that takes you deep recesses of unchartered territories of history, especially if you are not fond of it. Unlike Dalrymple's The Last Mughal, this book weaves in and out of the principal story. I must say that the book left me enriched and educated; because I no longer feel that history is what you read in textbooks.

5* City of Djinns: A Year in Delhi 4* Nine Lives 5* In Xanadu: A Quest 6* From the Holy Mountain: A Journey among the Christians of the Middle East 5* The Age of Kali: Indian Travels & Encounters 5* Return of a King: The Battle for Afghanistan 3.5* White Mughals: Love And Betrayal In Eighteenth Century India NONFIC NOVEMBER 2015

Until the first decade of the 19th century, Europeans living in India had no difficulties with cohabiting and having sexual relations with the local Indians, whom they encountered. The author centres his study on the life and loves of James Kirkpatrick (1764-1805), who became the British Resident at the Nizams court in Hyderabad. James Kirkpatricks life ended soon after his happy marriage to Khair un Nissa began. Dalrymple traces the tragic life of Kirkpatricks widow, who lived in exile in a coastal port on the east coast of India with her mother but bereft of her two children. PS: I can fully understand Kirkpatricks attraction to Indian women, having married one myself!

This book is the story of those years when it was not deemed entirely unacceptable to embrace Indian culture - most particularly the story of James Achilles Kirkpatrick, the Company Resident in Hyderabad, and Khair un-Nissa, a relative of the Prime Minister of Hyderabad. Dalrymple's own summary serves quite well - "in a time, and a society, when women had few options and choices, and little control over their lives, Khair had defied convention, threatened suicide and risked everything to be with the man she had eventually succeeded in marrying, even though he was from a different culture, a different race, and, initially, from a different religion." James Kirkpatrick represented the last gasp of the 'white mughals', the British officers and officials who whole-heartedly embraced the syncretic Hindu-Muslim culture of the Deccan of the time, performing and respecting the religious ceremonies, wearing the native costumes, falling in love with the women, often converting to Islam, and raising their Anglo-Indian children with feet in both worlds.

Without having any specific interest in India, I seem to have read quite a few books about India over the last couple of years, and William Dalrymple has a lot to do with it. Yes, its a history book, but you can read it like a novel. The central love story of this book is fascinating, and sheds a completely different light on the British in India.

The book won the 1990 Yorkshire Post Best First Work Award and a Scottish Arts Council Spring Book Award; it was also shortlisted for the John Llewellyn Rhys Memorial Prize. From the Holy Mountain, his acclaimed study of the demise of Christianity in its Middle Eastern homeland, was awarded the Scottish Arts Council Autumn Book Award for 1997; it was also shortlisted for the 1998 Thomas Cook Award, the John Llewellyn Rhys Prize and the Duff Cooper Prize. In November 2007, William received an Honourary Doctorate of Letters, honoris causa, from the University of Lucknow University for his outstanding contribution in literature and history, and in March 2008 won the James Todd Memorial Prize from the Maharana of Udaipur.