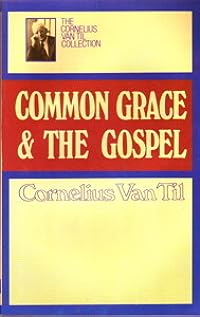 by Cornelius Van Til

Restoring the full text of the original 1972 work, this collection of annotated essays addresses questions on common grace and its relevance to the gospel. A pioneer in presuppositional apologetics, Cornelius Van Til sets forth a Christian philosophy of history; examines the views of Abraham Kuyper, Herman Hoeksema, and others in the debate over common grace; and replies to criticism.

The Christian can begin to allow for transitions between universals because the universals are ascribed to the counsel of God. No abstract staticism and no abstract change. 3. Therefore, the Christian reasons analogically with respect to these relations between facts. Reasoning analogically, if the being and self-consciousness of the ontological Trinity are coterminous, may we not also say that facts and universals are correlative in the counsel of God (40). 3. After the common comes the conditional; history is the process of differentiation. natural knowledge and sense of morality are not common grace. 4.b.2 Protestantism is a matter of restoring man to his true ethical relation. The Image of God in Man Kuyper: image in wider sense is the essence of man, which remains unfallen. The image in the narrower sense consists of true righteousness, knowledge, and holiness. Is the narrower sense so loosely/accidentally related to man that it can be lost without effecting that image at all? each concept must be subject to the whole of the revelation of God.

This book is a collection of various essays by Reformed apologist and theologian Cornelius Van Til on the topic of common grace. The first chapter covers the Christian philosophy of history which Van Til situates the debate on common grace from the perspective that one needs a biblical philosophy of history going into the debate in order for it to make sense. The second chapter survey the doctrine of Common Grace in the theology of Dutch Reformed theologian Abraham Kuyper while the third chapter goes over recent debate and Van Tils own suggestion to move the discussion forward. In chapter four Van Til discusses about Common Grace in relations to Particular Redemption while chapter five looks at Common Grace and the Christian duty of witness-bearing. Van Til goes from discussion of philosophy of facts to doctrines of revelation and Gods sovereignty.

Scott Oliphint, articulating Van Til's understanding of a Reformed doctrine of common grace, engaging views of others in this tradition that differ from his own. Cornelius Van Til represents a stream within the Reformed theological tradition known as presuppositionalism. Van Til would contend rather that it is by these realities, revealed by the witness of the Spirit alone to the elect, that it is possible to understand everything else about God, about human beings made in God's image, God's work in the world and through Christ, and the destiny of both the saved and the lost. Common grace is often advanced as a counter to these ideas, that there are things that may be known of God common to the experience of all human beings. In part, the appeal of this is a response to the Reformed idea that God saves some, and not others, simply by his sovereign will, apart from human choice. Van Til would argue, as I understand him, that common grace is simply God's love for all human kind made in his image before the fall.

The forward is around 40 pages, which spells out clearly what the Van Til will address within the book. Instead take time to read through the forward which will be a sure guide for the book. Well this book is surprisingly readable as compared to Van Tils some other book, it can be difficult to follow at times.

Cornelius Van Til, was a Christian philosopher, Reformed theologian, and presuppositional apologist. Van Til graduated from Calvin College in 1922, receiving a ThM from Princeton Theological Seminary in 1925 and his PhD from Princeton University in 1927.