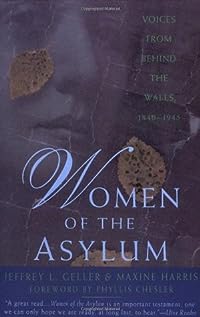 The 26 women who tell their stories here were incarcerated against their will, often by male family members, for holding views or behaving in ways that deviated from the norms of their day. The authors' accompanying history of both societal and psychiatric standards for women reveals the degree to which the prevailing societal conventions could reinforce the perception that these women were mad.

Geller and Maxine Harris have presented one of the first books of its kind here, bringing together the voice of women who were incarcerated in American institutions against their will over a 105-year period, and giving them 'the opportunity to speak for themselves'. Geller and Harris also discuss their decision to split the period up into smaller chunks due to shifting moral and social conditions in the United States. The twentieth-century women are keen observers of human nature and asylum abuse - but they have no universal frame of reference. As one would expect, I'm sure, some incredibly shocking accounts are presented here; for instance, the way in which 'any sign of economic independence or simple human pride in a woman could be used against her, both legally and psychiatrically.' There was also the fear that an individual would be driven to become mad solely due to her incarceration, or that she would remain in an asylum indefinitely, with no hope of ever escaping.

The mere fact that the medical society thought that simply having a uterus was enough to cause mental illness is astounding and sickening at the same time. The book doesnt tell you if any of these women were actually mentally ill. Unfortunately, you dont find out what happened to most of these women after reading their horror stories.

We still have a long way to go in understanding (and defining) mental illness, and in not confusing it with social dissent (don't get me started).

This book features excerpts from publications written by women who had been institutionalised in insane asylums over a hundred year period, with each time period preceded by a short introduction giving an overview of the general state of mental healthcare at the time. These are only a handful of cases, written by the women who were well enough to tell their stories.

First-person written narratives from women committed to insane asylums does not make for easy reading.

The other comments on here are correct - the editors are definitely focused on affluent (and very literate) white women.