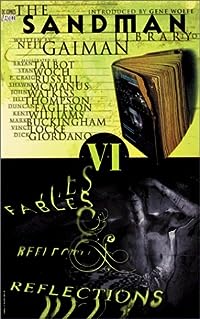 Fables & Reflections (1993) is the sixth collection of issues in the DC Comics series, The Sandman.

Three of the issues making up the "Distant Mirrors" group were published between the "Season of Mists" and "A Game of You" story arcs.

The last, "Ramadan", was written contemporaneously, but because of art delays DC published it as Issue #50, after the "Brief Lives" arc.Three other issues appearing in Fables & Reflections, published as the Convergence story "arc", are also single-issue short stories.

"Convergence" appeared between the "A Game of You" and "Brief Lives" story arcs.

"Death was a little older than Dream. Naturally, my favourite was the one that involved Dreams older sister, Death. Dream understands and I think Death does too, but the others are yet to get there.

Graig Russell, Bryan Talbot, Kent Williams, John Watkiss, Jill Thompson, Duncan Eagleson & Stan Woch Covers: Dave McKean Letterer: Todd Klein EMPERORS, CITIES, MONTHS, TEARS & SONGS In this sixth volume, Fables & Reflections, you will find an illustrated short story right in the beginning of it, even before the introduction, written by Gene Wolfe (which by the way, no offense, but its quite spoiling, so in this ocassion, I recommend that if you still want to read the introduction, its better to do it after reading the TPB, to enjoy more the surprises contained here. There is nothing wrong is reading fiction, but having in mind that real life can be as fascinating, fantastic and almost impossible to believe than fiction. Reality isnt a bad thing, sometimes people find fiction like that land where any dream can come true, but reality has the same chance, if you embrace it as well. Its real, after all, therefore it is, not matter if you believe it or not. So, if you really believe in something that born in fiction, and may other do too, then isnt that fiction become something real in this world? And if you believe that a man can fly, there is no limits, boundaries, even thermidors, to stop anything to become real. Does the mind any right to say whats real in the heart? If only you believe in something, is it less real? Neil Gaiman shows us in this sixth volume, Fables & Reflections, how wonderful is real life, of course, why not adding some dreams into the formula, but at the end, at the bottom of the stories, they are based on real events, not matter if you cant believe them. When a story tell you right away what to think of it, when it tells you in plain sight whats the message of it, well, its not like it makes it wrong, but certainly keeps away the reader a bit from the story itself. And you will amaze how many leaders now watched as insane dictators, they thought that they were doing the right thing. Love is there, right behind you. Neil Gaiman takes us in a fantastic journey melding lore and folklore, from many cultures, Arabic, Hebrew, Greek, Roman, American, European, and from many time periods, since the very beginning of history as well as visiting times of terror and times of wonder.

Gaimans economic method of connecting Orpheus to the Sandman story is ingenious, but the real attraction here is the straightforward telling of the legend of Orpheus itself and the memorable illustrations of the wedding, the palace of Dream, the cottage of Death, the wraiths of Hades, and the rage of the frightful Maenads.

I'm really in the swing of my Sandman re-read and loving every second of it, now. Watching Emperor Augustus play a beggar was priceless, as was the examination of what makes an everlasting empire.

Volume six is a collection of shorter stories, one-shot issues that may or may not be related to the main story arc, but they offer the author the chance to explore different aspects of the way Dreams shape our world and define our personalities. More than trying to understand the lives of his subjects, Augustus is attempting to exorcise demons of his youth (Dreams as nightmares) and also decide about the benefits of absolute imperial power : is it a force of progress or a path to corruption, decadence, dissolution? Gaiman answers the question by making him the subject of a wager with his fellow Endless, proving that our Dreams are stronger than Despair, Desire, Delirium and even Death. Ramadan - Harun al-Rashid, another ruler who likes to wander in disguise among his subjects, reflects on the transience of beauty, and makes an appeal to Morpheus to preserve the most magnificent city in all history (Baghdad) by moving it into his realm of Dream, becoming the stuff of legends and myths, the only form of beauty that transcends Time. This is the one issue where the artwork was below the high quality I have come to expect from the series, and it had the curious effect of making me less interested in the actual story told. I understand Daniel will play an important role later in the series, so probably this issue is part of his build-up, training for what is to come. Gaiman mixes the Greek Gods with the Endless in the story about the power of art to defy Death, but also the ultimate defeat of the artist in trying to rise above his limitations.

So I know my cool factor is pretty low, but especially when I rate one of his books poorly. This was a longer volume, and there were a few stories I liked.

I am definitely going to read the other books in the series.

It was one of five graphic novels to makeEntertainment Weekly's "100 best reads from 1983 to 2008", ranking at 46.Norman Mailerdescribed the series as "a comic strip for intellectuals." (Wiki) The Sandman#19, "A Midsummer Night's Dream", won theWorld Fantasy Awardin 1991 for Best Short Fiction.Also,The Sandmanand its spin-offs have won 26Eisner Awards,including three for Best Continuing Series, one for Best Short Story, four for Best Writer (Neil Gaiman), seven for Best Lettering (Todd Klein), and two for Best Penciller/Inker (one each forCharles VessandP. VOLUME 6 (FABLES AND REFLECTIONS) This volume divides up into several tales which are mostly thematic rather than connecting to the overall story (though one could argue they are story related as there are many ties to Dream's son, Orpheus, and their dysfunctional relationship). Three Septembers and January (B plus to A minus story) (Dream and Despair go at it, using the Emperor of the United States as a playing piece in their competition. The Parliament of Rooks (B minus to B story) (More interesting for the mythologies than the present time characters and arguably a setup for later in the series). ARTWORK PRESENTATION: B to B plus; STORY/PLOTTING: B plus; CHARACTERS/DIALOGUE: B plus to A minus; INTELLECTUAL FOCUSES: A minus; OVERALL GRADE: B plus to A minus; WHEN READ: 2005 (reread and reviewed end of September to early October 2012).