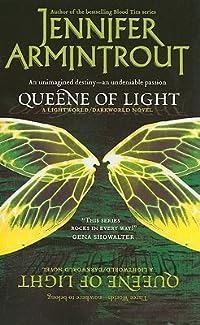 In a time not long from now, the veil between fantasy and reality is ripped asundercreatures of myth and fairy tale spill into the mortal world.

But even magic folk cannot dwell in harmony, and soon two Worlds emerge: the Lightworld, home to faeries, dragons and dwarves; and the Darkworld, where vampires, werewolves, angels and demons lurk.

Now, in the dank and shadowy place between Lightworld and Darkworld, a transformation is about to begin.

Ayla, a half faery, half human assassin, is stalked by Malachi, a Death Angel tasked with harvesting mortal souls.

Instagram Twitter Facebook Amazon Pinterest For the longest time, I didn't get into faerie paranormal romance, because it kind of felt like a cheap way for authors to create an All My Children-esque soap opera of beings that were even more good-looking than ordinary good-looking people and who used magic to do the usual litany of soap opera fillers, including cheating, fucking, murdering, and causing people amnesia. Holly Black's THE CRUEL PRINCE was one of the first faerie books I read that actually gave me the dark machinations I was craving. I just finished reading the first book in Armintrout's Blood Ties series, which is about vampires, and it was amazing. Lightworld is where the Faeries and dragons reside, Darkworld is where things like demons, Death Angels, and vampires live, and there's a neutral zone in between called the "Strip." Ayla, being an assassin, has more freedom than most Lightworlders and is in the Darkworld fulfilling a bounty for the Queen when she happens upon one of those Death Angels. The romance here isn't the best, and in my opinion isn't as well done as that in THE TURNING, but I was willing to be forgiving because the world-building was so good and there's some truly excellent court intrigue in here with plotting on top of plotting, reminiscent of Holly Black's Cruel Prince series.

Personally, I'm not a fan of heroes who speak in "I do not understand" and "You will explain this to me" archaic forms, but I did find Malachi's characterization before his Fall very interesting. Formerly a death angel and soulless, Malachi is almost alien in his apathy and animal-like savagery. Unfortunately, too much of the politics was conducted in a very Romance way with the Queen having frank conversations with Ayla Nobody and so on. So if you're a big paranormal romance (light on the romance) fan, don't mind the prose and fancy the idea of an outcast Faery -I did like the focus on her halfling heritage- fighting to carve a place for herself among her people and court and helping an angel learn it's not cool to kill along the way, check this out.

Many urban fantasy authors have written about supernatural races coming out of the shadows and living among humans. Our heroine is Ayla, an assassin in the service of the decadent Queene Mabb. Queene of Light is structured as a paranormal romance, in terms of the way the plot unfolds. The focus is Aylas and Malachis fight to survive, and to find a way to be together, in a world of dangers and betrayals. I couldnt put Queene of Light down, and I will eagerly devour the next two installments of the Lightworld/Darkworld series when they come out later this year.

I bought it during the clearance sales when my bookstore was closing, and it got a bit lost in the sheer quantity of books I was buying at that time. Malachi, out of revenge for his Fall, wants nothing more than to kill the girl. It wanted to be the romance of Ayla and Malachi, but neither one had enough character to truly drive a story, and their attraction to each other made very little sense.

I picked this up because I had read and liked Armintrout's previous work, but honestly, I found it disappointing. He's a Death Angel who accidentally Falls at the beginning of the book, and spends the rest of it brooding and talking like a caveman. I give the book 2 stars because I was interested in what would happen to Ayla, and I like the world setting.

Her most recent assignment brings her into Darkworld, the home of evil creatures and humans that were banned from the Up World. Legend has it that there are Death Angels in Darkworld, powerful creatures that kill without mercy. When he encounters Ayla, he brings it upon himself to rid the world of the Fae creature. This is the first installment in Jennifer Armintrout's new trilogy, Lightworld/Darkworld. I have read Jennifer Armintrout's first series, Blood Ties, and enjoyed it very much. If you liked Jennifer Armintrout's previous series, you should really give this book a shot. I'd also like to thank Jennifer Armintrout herself, for stopping by my blog early in June to notice my Waiting on Wednesday post featuring this book.

Coming of age Ayla goes to the Faery World and appeals to the Queene to allow her to live among them. Ayla thus begins her life as an Assassin for the Queene of Light. A brush with the Angel of Death leaves both Ayla and Malachi stunned beyond belief with it's outcome. The author has given us a story of many creatures, good and evil that live together but hide from each other.

This one is a post-apocalyptic story with angels and faeries (yes, both belief sets if you can actually... Malachi is a fallen angel... I thought the writing was awkward in the beginning because of the history lesson dump, telling us all about all the worlds all at once but once you get the gist of what has happened (Apocalypse, the humans have merged the world of the impossible...faeries, angels, demons etc into the real) it was easier to read. The story is a bit simple, a bit predictable and reads a whole lot like a person was reading Romeo and Juliet.