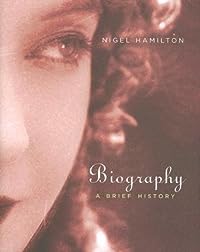 Above all, how is it that biographies and autobiographies play such a contested, popular role in contemporary Western culture, from biopics to blogs, from memoir to docudrama?Award-winning biographer and teacher Nigel Hamilton addresses these questions in an incisive and vivid narrative that will appeal to students of human nature and self-representation across the arts and sciences.

Tracing the remarkable and often ignored historical evolution of biography from the ancient world to the present, this brief and fascinating tour of the genre conveys the passionate quest to capture the lives of individuals and the many difficulties it has entailed through the centuries.

The author states the Greco-Roman era as the golden age of biography. Hamilton goes on to explore the dark ages and the rise of Christian hagiography (the biographies of saints).

The world has long been in great need of a good narrative history of one of the most popular genres of writing (and other media): biography. Nigel Hamilton, himself an award-winning biographer and from 2010-2012 president of the Biographers International Organization, would seem to be the ideal candidate for writing precisely that volume, a historical introduction to biography; after all, he himself notes that, as of the time of writing, he had been teaching the history of biography for ten years, and so here proposes to "give readers a narrative overview of biography's modest origins in prehistory and its long development in the West, culminating in its explosive growth in the late twentieth century" (2). Hamilton defines its scope broadly, primarily so as to venture freely and frequently beyond the bounds of traditional print media; the "cross-media expansion" of biography is among Hamilton's key foci, and he announces from the prologue itself that the term "needs to be redefined to encompass the many, many different ways in which real-life depiction is practiced in Western society" (3). For the most part, at least once he reaches the modern era, Hamilton does typically produce, chapter by chapter, a narrative that treats the development of biography. (On first read, I thought Hamilton paid too little attention to Samuel Johnson before that, but he does indeed offer Johnson, with his biographer James Boswell, a fine chunk of the third chapter.) In particular, I found the cursory eight chapter ("Death of the Author"), with its incisive look at poststructuralist, deconstructionist, and postmodern contributions to biography (or, rather, the lack of meaningful contributions therefrom), to be enthralling, entertaining, and clear-headed, even if his closing tangent on the infamous Sokal affair undoubtedly does more to advance a general critique than to further the message of the book. So, for instance, he seems to see 'good' biography as an unmasking, and so biographies written to depict models for virtuous living (e.g., hagiographies) are presented in a substantially poorer light than those by "Suetonius and Tacitus, who reveled in stripping the masks from much commemorated heroes of Greece and Rome" and thus constituted "the first golden age of biography," from which biography degenerated into a "largely commemorative role" following the fall of the Western Roman Empire (34). One of his stated lenses in this book is the way in which negotiations over presenting private lives for public consumption (including the ramifications for public morals) have driven biography's development. Only later does Hamilton turn back the clock to the most cursory sort of treatment of the Old Testament imaginable, which he simply refers to as a "biographical compendium of the ancient Jewish world" (34) and a collection of "a thousand years of speculative and documented genealogy, encomia, rhetoric, poetry, prophecy, and love of narrative, in memorable depictions (from a variety of sources) of individual men and women, heroes and villains" (36). In this he can be forgiven; it wasn't until the year after this book came out that Oxford University Press released Joshua Berman's landmark 2008 study Created Equal: How the Bible Broke with Ancient Political Thought , which in its fifth chapter demonstrates that in Exodus (and elsewhere) we have the pioneering of new forms of narrative - the sort without which, the modern enterprise of biography, in precisely those elements of which Hamilton is so fond, could not have developed. He has a tenuous grasp on Christian doctrine, in reducing it to "personal salvation in this life, and the avoidance of hell in the next, by following the example of Jesus as described by his four authorized biographers" (49). In particular, he makes mention of the "alternative, less deifying, and literally death-defying biographies by writers such as the Gnostic chronicler Thomas," which he claims were "damned, destroyed, or driven into concealment by the early Christian church authorities for almost two thousand years" (39). One questions even the phrase "less deifying," for although the canonical Gospels have a high Christology within the context of Second Temple Jewish thought, the Gnostic Gospels certainly don't present the sort of merely human Jesus popular with their twentieth- and twenty-first-century pop-(mis)interpreters. But perhaps most importantly, the very example he chooses to highlight - the so-called Gospel of Thomas, to which we may also add the Gospel of Mary Magdalene he excerpts, and even the Gospel of Judas he mentions in a footnote thereto - does not meet Hamilton's own definition of 'biography'! Unlike the canonical Gospels, in fact, not a one of these is an example of "creative and nonfictional output devoted to recording and interpreting real lives" (1). The Gospel of Thomas, dating to the late second century (at best), is a collection of sayings abstracted from a narrative framework; the so-called Gospel of Mary is of a discourse format, and does not even purport to be any sort of biography of Jesus; and much the same is true of the Gospel of Judas.

Supported and explicated by lively studies like this one, biography may finally get the respect it deserves.

This is a really great book so far (just starting chapter 6 - about halfway through).

Few books are dedicated to the actual history of biography, so this is a great contribution to this understudied field.