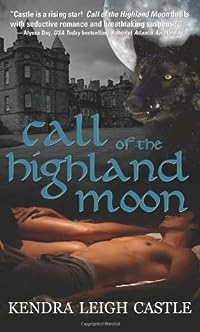 Call of the Highland Moon

Gideon MacInnes is a werewolf from the Scottish Highlands.

He loves the haunting beauty of his home, but runs away to upstate New York, grappling with his destiny of being his clan's next alpha.

Trapped together through the raging storm, Gideon discovers that he's found his mate and Carly has to choose between becoming a werewolf, charged with protecting humankind from the inhabitants of an evil otherworld, or giving up the one man she's ever truly loved ...

Read the Book "Call of the Highland Moon" Online

With the whole 'creatures of the dark' thing going on in the publishing world lately, it's hard to find new authors who can put a different, but still intriguing, spin on any of the legends. The follow-on book "Dark Highland Fire" is scheduled for release in Oct 2008 and you can bet it'll be on my to-buy list. The author combines, history, legend, Scottish lore, and mystery to give us a new take on what these creatures are and why they exist.

All throughout reading it, I kept thinking things like Where's the plot? All three of these things were seriously lacking, IMHO, and that combined with an overabundance of introspection and passive narration made for a slow, plodding read that never really captured my imagination or engaged my attention well at all. She also loves animals, which is why, when she finds Gideon injured in his wolf form on her doorstep, she takes him home. There just wasn't much to grasp onto, such as expressions of feelings, body language, or other things like longing looks and lingering touches that would stir my emotions. I've read plenty of paranormal romances where the hero and heroine are mates and their attraction to each other is immediate, powerful, and palpable, which can also help me to buy into them making a lifetime commitment within a few days time (like in this story), but with Gideon and Carly I felt nary a spark. It can drag on for paragraphs or even pages, leaving my mind wandering and making me forget what's happening, because there's so much space between the character's actions or dialogue where they're not doing anything except simply thinking. If someone took that long to think things over in real life before responding verbally or doing something action-wise, it would be stupendously boring and awkward, and I can't say it's all that much different in a book. It was like constantly reading stream of consciousness narration from the characters, leaving very little room for actual storytelling. Eg. She jumps from Carly finding Gideon in his wolf form, injured on the doorstep of her shop and deciding to take him home, to her waking up in bed with him in his human form in the morning. Yet another skimmed over scene that I think would have been much more fun and interesting written out was when Gideon helped Carly out in her shop one day and practically got mauled by her customers. There were also lots of other instances where some intriguing tidbit would pop up in their introspections, making me say things like What does that look like? In this book, some of the sentences are constructed in a confusing way, so that I had to re-read them several times to figure out what was being said. IMHO, the author should dispense with the hand-holding and trust her readers to be intelligent enough to grasp the nuances of her writing without telling them every little thing. Aside from generally liking the hero and heroine, the only other thing that kept the book from getting an even lower rating from me is the three or four scenes that were written more actively and with a better balance between the dialogue or actions and introspection. It appears that Gideon's brother, Gabriel, will become the hero of the next book, Dark Highland Fire. Readers who are more forgiving of passive narration and sub-par character and plot development may enjoy this book (and the series) much more than I did, but I have a plethora of new authors to try, as well as the backlists of far too many favorite authors to read to spend any more time on a book series I'm not enjoying.

The style of writing is ditracting--sentences which are interrupted by random asides about character or descriptions--by the time the author returns to the original point, I found I had to go re-read the first part of the sentence to remember or be clear on exactly what she was trying to tell the reader.

One thing though, when I read a book involving someone that has an accent, I like the author to actually do the different wording for that accent. In this story I think Gideon and/or his brother Gabriel called their father da like once, otherwise it was always dad. 2. When Gideon first met Carlys family at her house, how did he know her mother had dressed up for him?

However, this was boring and I couldn't care less about the character's choices. I can't tell, but now, after having read many other stories with the theme and genre, this "world" just didn't captivate, neither did the characters.

Oh, right, she did ;) Thanksgiving weekend was a wonderful time to read about Carly in her upstate New York snowed-in town (I live in South Texas, an anti-snow city). Carly doesn't really expect the dog to live through the night but decides that if it does, well, she's always wanted a pet... And there was a satisfying resolution at the end (which doesn't happen much anymore, I gotta say!) yet the door was left open (pun intended - just read the book!) for a follow-up story.

The characters are believable...and it would probably sound a little silly to say about a supernatural book that some of the actions and reactions seem a little fast and far fetched...