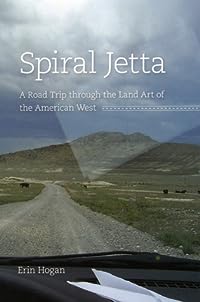 Spiral Jetta: A Road Trip through the Land Art of the American West

Her journey took her through the states of Utah, Nevada, New Mexico, Arizona, and Texas.

Read the Book "Spiral Jetta: A Road Trip through the Land Art of the American West" Online

But there are several problems with the book: first, it's a version of City Slickers, wherein a "sophisticated urbanite" who happens to be the public affairs director of the Art Institute of Chicago decides to test her mettle by driving solo out to the west to see the earth works. To be a genuine jerk, I think she means to say that she wanted to learn how to find quietude, not solitude, as that is what I would argue typically occurs when confronting not only a work of art, but of experiencing the vastness of space out in the west. Regardless (and to be more of a genuine jerk), I think her primary motivation is simply to write a book about this road trip and she had already planned to do so. In short, the author was woefully unprepared, had no compass (and failed to buy one after nearly getting lost in Utah), did not seem very bright, and was not very insightful about what she ended up seeing.

Like Eat, Pray, Love is both personal memoir and foodie travel guide, and Julie & Julia both personal memoir and cook's journal, this book, by Erin Hogan, is both personal memoir and art travel guide. A dyed-in-the-wool city mouse, Hogan drives solo into the deserts of the American southwest in search of various landmarks of land art, like the sculpture Spiral Jetty, by Robert Smithson, from which the book takes its name (she drives a Jetta -- God knows what the book would have been called if she drove a CRV), and the Lightning Field of Walter De Maria. About two thirds of the book is Hogan narrating her journey: where she drives, where she sleeps, what she eats, whom she meets. The personal journal isn't all that personal; we know little of who Hogan is, what she's escaping, and what beyond a certain mousey-ness (city or otherwise) she wants to shed. My mind had been so deep in the idea of looking at art while reading the book, and so parched for the lack of actual visuals, that the map was like a very cool glass of water after a very long drive in the desert.

There is a crisis in art criticism in the U.S. IT has been depicted as a battle between judgment and indifference (in the postmodern sense--you choose not to judge because you know any judgment, once deconstructed, will demonstrate bad faith). It includes journalism and aspects of the personal essay.

Erin Hogan, a self-identified recovering art historian and inveterate Chicagoan, wants to break out of her 9-to-5 routine, face solitude, and see the great American land art monuments. We spend plenty of time cruising desolate roads in Hogans Volkswagen Jettagetting lost looking for imprecise landmarks hidden amid mesmerizing Western scenery. The only reason we know that the day job Hogan is breaking from is as director of public affairs at the Art Institute of Chicago is because of the bio on the book jacket. She also isnt afraid to question the very creation of these works, asking if they are really worth the millions of dollars it takes to construct and if so, who they will affect and if the experience is really so radically different than camping. Many locals that she encounters either dont know about the art or are aware but unimpressed, leading her to wonder if the works are unnecessary if you are already live in the rural West and have a habit of watching the sky/sunrise, thus having already acquired the natural, heightened perception of the world that these works help others gain.

Her sole research about western culture appears to have been reading Jon Krakaeur's Under the Banner of Heaven, so she's constantly on the look out for Mormon extremism. I wish she'd had the good sense to actually explore Juarez's problems in a constructive way or to not include the chapter at all. I feel like the only details we skip are her restroom breaks. Between that and the low quality photos in my paperback edition, I consistently turned to Wikipedia to get a sense of the artwork, and really, I think that's a better source for information than this book is. The chapter on Lightning Field may be an exception, and I think it's the only artwork that this book made interesting on the page.

As an examination of contemporary landscape art in the U.S. West, the book succeeds in part.

One good chapter on Lightning Field - all others were written without much emotion or rigor.