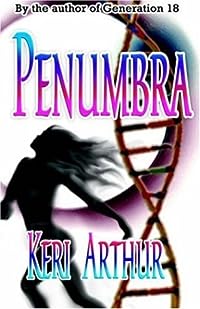 Offered the choice between guarding a clone and probable enemy of the country, or remaining stuck in her shoe box, Sam reluctantly accepts the former, even though she suspects Stephan is using her as bait to draw out the elusive and dangerous Sethanon.

Gabriel is relieved to discover he's finally shaken Sam as a partner, until he learns her new assignment is guarding Wetherton, the clone replacement of a government minister.

Both he and Stephan know Wetherton could only have come from one place-Hopeworth.

The military base has been involved in DNA experiments for decades and was more than likely the place where Sam was created.

But there is a growing likelihood that the military base is also the home of Sethanon himself.

All too soon he discovers the connection between he and Sam is far deeper than anyone could ever have imagined.

As the assignment begins to unravel around Sam and her past begins to reveal itself in her dreams, she fights to stay alive because the military wants their creation back.

Gabriel has mixed feelings about this, even though hes wanted Sam out of his life from the start, and well he gets what he wants; in the end ending up with a new partner and a mission of his own. The mystery missions both Sam and Gabriel have to take on where intriguing to say the least. We learn the truth about Sam, her past, her relationship with Gabriel, her relationship with Joe, and her origins. These first three novels in the series introduced the world and characters fabulous. Im sorry we dont have any more in the Spook Squad and I hope one day the author will come back to the series, because I still have questions and want more of these fabulously interesting characters.

Why in the name of all that is holy would a publisher re-release a book series that has no ending? That wasn't a problem for me, but when I started reading other reviews, I found out that Keri Arthur had abandoned the series after book 3. She told me she wrote a new Epilogue for the end of Penumbra to tie up loose ends. I feel like I should be talking about all the good things about this book and this series. But the sad truth is, how could anyone want to invest in these stories and these characters when you are left with no resolution to the main story arc? It's essentially the perfect penultimate book in a series.

This is soooo good, the ending left me NEEDING AND WANTING more! Arthur had plans to make this series a 4 book series, but Riley got in the way! Riley got what 7-9 books or something I think Sam and Gabriel could totally do oh say 40!

Adding a few pages that try to make it seem like there's suddenly a guaranteed happy ending in store for the couple that was refreshingly taking a slow path toward a relationship just doesn't solve the problem or make it worth buying these books.

Killing the man who is her partner, and yet not, Sam is pulled into a whirlwind of terror which begins to pull her history from her own mind, opening doors that should have stayed closed.Generation 18 is the second in the series, and continues Sam's story. We learn a lot more about Samantha in this volume, and I really came to admire and like her, though not Gabriel, a cold and isolated man, determined to shake Sam off as his partner. I mean, really liking it - enough that I sat other things aside and continued reading through all three books without stopping, other than to do what I absolutely had to.EDIT TO REVIEW:It appears that the whole "won't be publishing any longer" wasn't actually Keri's fault. I had planned a 4th book, but the Riley Jenson series came along and given it was my first major book contract (along the publisher's decision to release the first 4 books in one year), I had to give priority to that series rather than the Spook Squad novel. I wish I could finish the series, too, believe me, but there's just too many other books I have to write.So, now we know why Spook Squad was never finished - the demands of Publishers!

I must say that this is the last volume the author wrote for the series and I was very curious to know the answers to my questions, including about the Sams past. Each of the two has to work on his/her mission, the first one on a series of murders and the second has to learn more about this clone to try arrest the enemy #1 of the SIU. We finally learn the truth about Sam, her past, her relationship with Gabriel, her relationship with Joe, her origins. The latter is quite irritating as he doesnt assume his wishes and desires, especially when they are named Sam but I loved seeing him change and understand what is happening. We are also introduced to the new Gabriels partner Illie, I enjoyed him very much for the little Ive seen.

I've enjoyed finding out more about Sam's past and her new abilities and was pleased to finally see the start of something developing between Gabriel & Sam. If I was to rate it as a stand alone book it would be up there with my favorites. I've really enjoyed reading these books & would rate it right up there with Keri's Nikki & Michael series if it had a proper ending. I would still recommend the Spook Squad trilogy as a great Urban Fantasy series and it has all the hallmarks of Keri's fantastic writing but if you are easily frustrated by the lack of a complete ending then you might want to skip this & try some of Keri's other work.

Each one I'm riveted and I want to know more. This latest series, I finally am able to get books 2 and 3; I'm all excited. I'm half way through the book as the picture is really starting to gel for me. Gabriel is finally showing some emotion to Sam. The worst part for me is I'm pretty sure I know what will happen. The answers are coming fast and furious; I'm pretty sure I'm not going to like the ending. Well, and heart ache for Sam. I feel like this series has at least another couple of books to offer. I want to know about the war. I want to know how this ends.

Offered the choice between guarding a clone and probable enemy of the country, or remaining stuck in her shoe box, Sam reluctantly accepts the former, even though she suspects Stephan is using her as bait to draw out the elusive and dangerous Sethanon. The military base has been involved in DNA experiments for decades and was more than likely the place where Sam was created. The story and the characters are awesome, but knowing it is the end and there is no resolution makes it hard to rate just this book. I am going with a 3, the story on it own is probably a 4 or 4.5, but in all honesty I cannot give that kind of rating to the end of a series that leaves so much undone.