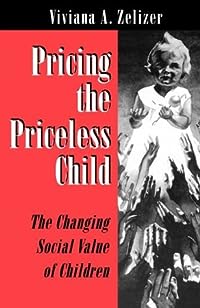 Pricing the Priceless Child: The Changing Social Value of Children

by Viviana A. Zelizer

In this landmark book, sociologist Viviana Zelizer traces the emergence of the modern child, at once economically "use" and emotionally "price," from the late 1800s to the 1930s.

Having established laws removing many children from the marketplace, turn-of-the-century America was discovering new, sentimental criteria to determine a child's monetary worth.

Pricing the Priceless Child calls upon us as social workers to consider two fields of study that we ordinarily have little contact with: sociology and economics.