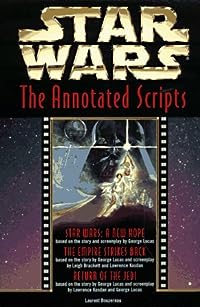 n all three full-length screenplays, presented with the secrets that led to their creation. Through hours of exclusive interviews with George Lucas and others involved in crafting the original trilogy, Laurent Bouzereau has uncovered the complex process through which life was breathed into the legendary Star Wars saga.

STAR WARS: THE ANNOTATED SCREENPLAYS George Lucas went through many different permutations of plot, subplot, and character before he was satisfied with what he had. it is fascinating to go back and explore how Lucas created the stories and the characters and try to visualize what the movies might have been like if Luke Skywalker has been over sixty years old. (181) According to Ben Kenobi, The force is what gives the Jedi his power. (187) Luke didnt want to believe it, but Through the Force, things you will see. (191) It could be argued that many of the original ideas not used, especially in The Empire Strikes Back, are recycled or adapted in THE FORCE AWAKENS or THE LAST JEDI. (165) * Caped and hooded in a cloth of gold (174) * In the story treatment Yoda tells Luke that Ben gave him the talisman he wears around his neck so that he could find him. (178) * Luke says he feels the Force the most when he is angry. (183) * Later Yoda and Luke reach a tree with giant twisted roots near a dark sinister cave. Yoda says that the tree is strong with the dark side of the Force and tells Luke he must face it. He comes out shaking and scared, and the scene ends with Yoda telling him to go back inside the cave. (197) One of the things he was doing on Tatooine besides watching over Luke was learning how to keep his identity after he became part of the Force. * Another dark idea that Lawrence Kasdan had for the ending was to have Luke put on Vaders mask and say that hes now going to destroy the Rebel fleet and rule the universe. THE EMPIRE STRIKES BACK In Empire, characters like Chewbacca were filmed welding because I was the only thing you could see what they were doing. (199) In the second draft of Empire, the idea of Vader being Lukes father first appeared. Lucas came up with the idea of Leia strangling Jabba with her chain similar to a scene in the Godfather. According to George Lucas, Return of the Jedi is about the redemption of this fallen angel and Luke building his own lightsaber symbolized himself detaching from his father. We dont ever get to see how he does it, but the idea of retaining your identity after youve passed on is something that Ben learned as a Jedi. (144) Before Yoda peaced out, he told Master Skywalker: Luke, when gone am Ithe last of the Jedi you will be. Even though at some point Yoda and Ben interfered, I eventually decided they couldnt connect physically with what Luke was doing.

What is fascinating about these annotated screenplays is that such an authoritative text actually deconstructs its own authority, the idea of canon/continuity (so important to so many fans), and even the idea of a core "true" narrative. These recurrent, sometimes subtle, challenges to a single primary text (and they are challenges, since even ignoring the special edition, these screenplays at times contradict the scenes in the films) feel quite...postmodern, whether that was the intent or not. These blocks of text interrupt the reading of the screenplays, constantly encouraging the reader to step away from the script as pure narrative and to instead review it as a constantly evolving creative work, changed both by time and collaboration.

This book is basically the full screenplays of A New Hope, the Empire Strikes Back, and Return of the Jedi, intercut with observations from George Lucas and various writers, directors, producers, and special effects people on how the final story/screenplay changed or was different from previous drafts or iterations. At this point, it is vital to know that this book was published in 1997, just after Lucas finished his first bout of "updating" the original Star Wars trilogy with the first of his many "Special Editions". For example, Lucas claims in the Annotated Screenplays that the original title for Return of the Jedi, Revenge of the Jedi, was merely a false title to throw people off about the nature of the movie and that it was never intended to be the real title, when he in fact (and others) have said many times previously that Revenge of the Jedi was the true title until a few weeks before release when Lucas realized that he had made a mistake because, ideologically, the Jedi don't take revenge and Lucas had it changed. This actually echoes the most famous title change of all when Lucas added "Episode IV: A New Hope" to the original title of "Star Wars" a week or so into its theatrical release. Creative vision naturally changes with time, so why not acknowledge that in 1977 he had one idea about Star Wars and that vision evolved in 1997? None of this means that the Annotated Screenplays are not worth taking a look at, if for no other reason than curiosity, but don't believe everything you read, especially if it comes from George Lucas.

The screenplays are presented in full, but the important part of the book is the alternate versions of the script that are presented.

Bouzereau has combined screenplays from all three of the classic trilogy films, and has included annotations or notes of how the early drafts compare to the final product. It was also cool getting notes from the production crew as well as Special Edition script additions for the new scenes that were added when the films were rereleased in 1997.