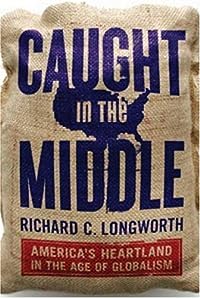 Caught in the Middle: America's Heartland in the Age of Globalism

A sharp, brilliantly reported look at how globalization is changing America from the inside out.

Read the Book "Caught in the Middle: America's Heartland in the Age of Globalism" Online

Longworth has to deliver to the Midwest, in his excellent, comprehensive, aptly named book, Caught in the Middle, seems to be: The industrial age is gone. As he cogently makes clear, the days of the high-paid, low skilled, industry-jobs are gone. Longworth makes the strongest pro-immigrant labor argument Ive ever read. Wherever they have gone in the Midwest, immigrants have enriched their new homesoccasionally, even saved them from a slow death.pg. It was hard-working, foreign-born labor, albeit mostly European, that built the big industries in the region, and the Midwest itself, to begin with.

Why is it necessary for us to have badly-educated immigrants, essentially making a permanent new underclass, when we already have badly educated citizens who could in theory do the same work? Of course, American citizens would be less likely to put up with abusive working conditions- hence the "need" for immigrants, especially illegal ones. "Globalization", as Longworth describes it, seems to be based on cheap oil. Personally, I am not at all sure that cheap oil is going to last all that much longer; it's sure getting more expensive in general- as is our food, in what I think is not a coincidence.

The coasts are sort of ignored, especially when he brags about how all change starts in the Midwest. The discussions on immigration (and race in general) made me uneasy, but it's not like anyone else has come up with useful ideas. His ethanol predictions were solid and the ideas for education probably the most interesting and innovative part of the book.

Caught in the Middle: Americas Heartland in the Age of Globalism pulls back to focus on the regions economic concerns, pointing at the entire midwestern region as a cross-section of the nation without a strong economic centerpoint and reasonable transportation/accessibility to unify business concerns. The working class stayer youth of Hollowing out the Middle are easily the younger versions of the citizens of Methland, working two or more minimum wage jobs in order to stay afloat financially while relying on illegal drug use and dealings to stay alert and to bring in extra much-needed cash. The inability of people to move easily about the region, highlighted in Caught in the Middle, drastically affects the achievers, who leave their small towns in order to have access to the global culture, opportunities, and multiculturalism that they cannot find at home.

It seems obvious Longworth cares deeply about the Midwest and hopes for a positive future but at the same time he recognizes most Midwesterner's are content to either ignore the problems, or to blame their problems on others. The rural world is still white-on-white, local, fixed on itself as the homeland of all virtue." I have contended that recent arguments in our area about the six-day creation and a 4,000 year old earth, reflect a subliminal fear, or acknowledgment that life is changing in ways we don't understand. If someone refuses to believe the way I do, then I can write them off, or if they represent the forces of globalization I can demonize them, especially if they refute my belief in a six day creation, or if I refuse to acknowledge the relevance of the issue. Longworth offers several ideas for changing the Midwest, some of which will be controversial.

Longworth blames the labor unions that dominated these towns for creating a class of workers that relied on little more than a high school diploma to provide a comfortable living for life. The regions world-class universities, like the states and the cities themselves, are in constant competition with each other. Longworth proposes that instead of an every man for himself attitude, the Midwest needs to think as a unit. Cheap Mexican workers are buoying small rural towns when they are the only ones who will work in dangerous meatpacking plants.

Longworth gets some of the details wrong - parts of the book read like his fact checker was out for coffee - but he gets the big picture right. That said, Longworth is certainly on the right track when he looks to new centers of power emerging in technology clusters - places like Silicon Valley that foster 21st Century wealth. Since state governments and state borders weren't drawn to solve any particular problem, Longworth argues, it's unlikely they'll be relevent to a solution to the midwest's problems (like technology clusters would).

I very likely set out reading this book just looking for things to be critical about. (Like I said, I'm still WHOA bitter about that Sociology degree...and also that one really bad Journalism class I took in high school...) But then Longworth provided me with an early point of criticism in which he used the presence of the KKK in Southern Indiana as a factor in delineating Northern Indiana as part of the 'Midwest' and Southern Indiana as being too closely tied to the 'South'. Perhaps Longworth was not aware of the heavy historical presence of the KKK in and around Munice, IN (a city he uses as one of his focused examples in Chapter 4 of a post-industrial Midwestern town)...but it was just something that bothered me from the beginning of Chapter 2 and stuck with me the whole rest of the book.

These contrasting speeches illustrate what Longworth considers the major problem of the Midwest-an unwillingness to change and meet new realities. Longworth admits that influxes of migrants bring problems, but the hard argument he makes is, if businesses cannot avail themselves of cheap labor here they will move elsewhere (China, Indonesia, Alabama). With immigrants providing a labor pool, these business stay in the local tax base. Longworth does cite some Midwestern success stories.