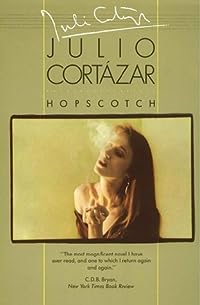 Julio Cortázar was so pleased with Rabassa's translation of Hopscotch that he recommended the translator to Gabriel García Márquez when García Márquez was looking for someone to translate his novel One Hundred Years of Solitude into English.

"Rabassa's One Hundred Years of Solitude improved the original," according to García Márquez.

I had it in my head that the book could be read in an infinite variety of ways. The need to flip constantly back and forth made the enterprise into a kind of personal search, with a possibility of getting completely lost. left hands (almost like a subconscious scale), in this book it was clear that the page I was on meant nothing at all. In this way, the book is not a thing with defined borders, but one that flows and overflows in soft focus. Because the novel talks constantly about literature itself, it is inevitable to think of all the works that the novel references (and there are many: Oblomov, The Man without Qualities, Bouvard and Pecuchet, Under the Volcano, The Notebooks of Malte Laurids Brigge, The Confusions of Young Törless, The Life and Opinions of Tristram Shandy, to name just a few off the top of my head) as expendable novels that are part of this one if you were to just expand those fuzzy borders slightly. > 14 5 So that another way of reading this book (not included in the instructions at the beginning) would be to read it straight through but at any mention of another novel, you must go immediately and read it in its entirety, then come back to this book where you left off. Or even further into fictional works that exist only in the book, like Morellis novels, and Ceferinos writings. What ends up being ignored are the things hidden underneath, which sheds light on the whole reason for the circuitous form to begin with. > 16 9 Throughout the book, Cortázar is concerned not only with literature and writing itself, but with the possibility of writing at all. His best friend (Traveler) and wife (Talita) are just across the way, also on the same floor, but in an opposite apartment building. Instead, they build an elaborate bridge from planks of wood and rope, weighing it down with the bed and the dresser and their own bodies like a scale. Because, for Cortázar, this bridge (across what he calls the unbridgeable distance) is never achieved elegantly (but so humanly in its inelegance), and never completely. (but watch out, you can also fall to your death) > 21 *** From Diverse Sides (Expendable Sentences): 13 page 307: The unbridgeable difference, a problem of levels that had nothing to do with intelligence or information > 33 14 At the center is the metaphor of imaginative numbers. -- Wikipedia > 28 20 page 287: This all seemed perfect to Talita and at the same time there was something like a bedcover about it, or a teapot cover, or some kind of cover, just like the recorder or Travelers satisfied air, things done or decided, to be put on top, but on top of what, that was the problem and the reason that everything underneath it all was still the way it had been before the half-linden, half-mint tea. We project our own ignorance into them and they seem like madmen to us, coming and going in a very decided way. Especially in some sections in here I just want to be reading Cortázars hypnotic prose where hes inside one of his characters head, describing a feeling or idea rather than the constant chatter between characters. > 31 25 In this picture, Oliveira and Traveler are two faces in a mirror, and yet Talita is the bridge that joins them. > 30 28 Sometimes these characters and their philosophical prattle annoy me, but I think Cortázar doesnt always like them either, and is kind of making fun of them, which makes it suddenly OK to read 600 pages of it. It does if you love Cortázars prose to begin with I guess) Like all big books this is a flawed one, but one which is so willing to make fun of itself, it seems. > 34 29 page 179: "Gregorovius had given up the illusion of understanding things, but at any rate, he still wanted misunderstandings to have some sort of order, some reason about them." > 6 30 page 286: It couldnt be (theres a reason for logic) that Horacio was interested and at the same time was not interested. This side, the other side, and beyond it: a race or to a people and a language at least > 13 33 Youre just like Horacio, Talita says to Traveler. They talk a lot, but even an empty threat to take the sardines away from Celestin is never followed through (the most active thing done by a male character in this novel, that I can recall, is when Traveler fetches a hat for Talita from another room).

Before one even starts there is a preamble which explains that you have at least two choices - either to read the first 56 chapters in sequence (presumably ignoring the rest) or to follow an alternative path through the book which is listed at the start and misses out Chapter 55. The first part of the book is set in Paris in the 1950s, and although it seems quite episodic and random, the nature of this appears to reflect Oliveira's own experiences and his state of mind, and those of his friends - there are also lengthy digressions on music (jazz, classical and popular), literature, philosophy and much else, with a lot of surreal episodes reminiscent of some of the pataphysical/Oulipo writers of the time.

WHERE WAS THAT AUTHOR'S NOTE WHEN I READ THIS BOOK?? because i read the whole 600 page book front-to-back the way one does, AND THEN i went back and hopscotched through it, thinking that there would be some secret doorway that opened or something that would illuminate why i was doing this second pass. it's a playful and lyrical schtick if you only have to read it through once, whichever way you choose.

And I must say that it is a disturbing experience: the reader must constantly interrupt himself in his reading of the novel which constitutes the first part, to read a page on literary creation, or an extract of almanac dealing with the difference between French and English gardens, or two stories that intersect on a page, forcing him to read every other line before returning to the start... But I must say that, curiously enough, I let go: I began to sail freely, agreeing to renounce the linearity of a story, the logic of the sequences, and I realized that my mind took pleasure this course full of surprises. Because Hopscotch is also a great love story.