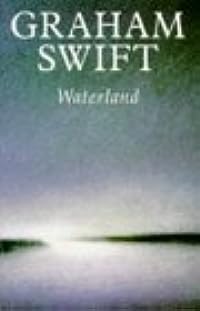 Set in the bleak Fen Country of East Anglia, and spanning some 240 years in the lives of its haunted narrator and his ancestors, Waterland is a book that takes in eels and incest, ale-making and madness, the heart sweep of history and a family romance as tormented as any in Greek tragedy.

It's a semi-Postmodern text examining the difficulty of writing Realism in a Postmodern era, but it goes off on romantic (not Romantic) tangents about natural history and cultural history and all, in a very Julian Barnes (A History of the World in 10 1/2 Chapters) way. (The only constants, heh.) I ended up wishing either Stephen King or Julian Barnes had written it, and focused on it - as it is, the tension is uneasy, and yet uneasy in a way that really contributes to the novel and its aims. There is a beautiful passage, though, which I'll include here: Once upon a time people believed in the end of the world. Look in the old books: see how many times and on how many pretexts the end of the world has been prophesied and foreseen, calculated and imagined. For a little while - it didn't start so long ago, only a few generations ago - the world went through its revolutionary, progressive phase, and the world believed it would never end, it would go on getting better.

The film portrays the history teacher's narrative in the form of flashbacks to tell the story of a teenage boy and his mentally challenged older brother living in The Fens of England with their widowed father. A side-theme is the teacher's grandfather, who was a successful brewer and who fathered with his daughter the narrator's older brother.

The premise of a history teacher who is about to involuntarily retire due to the principal's decision to eliminate the history program makes it plausible that the narration is the main character's last lectures to his class. As a result, the stories of his life jump around rather than happening chronologically.

Waterland is a story about storytelling, a narrative about narration that analyses the meaning and the necessity of history. And so the protagonist of the book, Tom, a history teacher in a high school, tells us a story. The Fens, where the biggest part of the story is based, serve Swift as the main metaphor of this cyclicality. Do we all live in the fens of history, I dare to ask? Another definition, children: Man, the animal which demands an explanation, the animal which asks Why."

Waterland: Picador Classic is undeniably an impressive and ambitious novel which ruminates upon history's relentless tide of change and humanitys subsequent shifting fortunes.

If you find yourself at the end sitting on a beach, skin saturated in emotion, mind stunned by the force of Swift's writing, and holding a husk of this book, then we'll know it's the latter.

Yes, there's incest. Lessons learned from the trials and tribulations of the Crick family can easily be applied to the great events of world history, and history itself is shown to be an irresistible constant of useless baggage wrapped around dire foretelling.

Tom Crick, now a history teacher, is forced into retirement due to an unfortunate and ghastly act committed by his wife. Tom Crick asks and seeks answers to a lot of whys because history rides uncomfortably behind that very word, that very monosyllabic question why? History doesn't always need to be about kings and queens, wars and revolutions, countries and soldiers, little Tom Crick and his childhood sweetheart Mary Metcalf had created history too, by doing a little and by letting a lot been done. This is an uncomfortable quilt you would like to tuck under and not want to let go off.

Some of his works have been made into films, including Last Orders, which starred Michael Caine and Bob Hoskins and Waterland which starred Jeremy Irons.