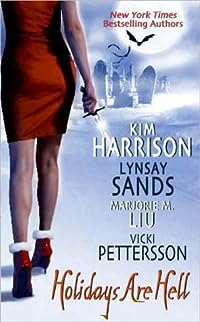 This holiday, spend quality time with family and loved onesliving and dead . . .There's no place like home for the horrordaysun you'd prefer a romantic midnight walk through a ghost-infested graveyard . . . or a haunted house candlelight dinner with the sexy vampire of your dreams. The (black) magical season is hereand whether it's a solstice séance gone demonically wrong with the incomparable Kim Harrison, a grossly misshapen Christmas with the remarkable Lynsay Sands, a blood-chilling-and-spilling New Year's with the wonderful Marjorie M. Liu, or a super-powered Thanksgiving with the phenomenal Vicki Pettersson, one thing is for certain: in the able hands of these exceptional dark side explorers, the holidays are going to be deliciously hellish!

My favorite stories in this anthology were "Two Ghosts for Sister Rachel" by Kim Harrison and "Six" by Marjorie Liu. Ironically, they weren't Christmas stories. "Two Ghosts for Sister Rachel" by Kim Harrison This story looks into Rachel's past, when she was eighteen, fresh out of community college, and determined to recover from her childhood of severe illness and to get a job working for Inderlander Security. In the process, Rachel raises the spirit of Pierce, a male witch who was working for the older version of IS, tracking a vampire who preys on young girls. I liked how Rachel got to strut her young stuff, showing the strong woman she would one day grow into. I liked the sweet chemistry between Rachel and Pierce. At first I wasn't sure of the tone, and the Kim Harrison story gave it a hard act to follow. I liked that he accepted Jill for what she was, helped to protect her from her pursuer, and he had felt the same way about her for months, but was waiting for the right time to declare his feelings. "Six" by Marjorie Liu Marjorie knows what us comic book/action-adventure movie/romance novel-reading fangirls want! I loved that this book was set in China, and that the heroine is Chinese and the hero is Chinese and Russian. Boy, I wanted some dumplings after I read this story; since one of the characters makes them, making me drool in the process. I did like the idea of a war between good and evil and how it's been told in comic books, which the forces call 'manuals'. I think I would have loved this story if had been more active, with more showing.

Here is my breakdown: Two Ghosts for Sister Rachel by Kim Harrison - 4 stars This is the story of an 18 year old Rachel Morgan. Run, Run, Rudolph by Lynsay Sands - 2.5 stars It's a cute story, really. The story continues with the destabilizer now in Claire and Kyle's basement. It's a cute love story and probably the first time I've ever encountered a "make-out" break. Cute story, not great. One good story and probably because I like Kim Harrison's Hollows series.

We are back in time when Rachel is eighteen and is still living at home with her great and crazy Mom. We meet her big brother Robbie who's coming home for the Solstice after being at the West Coast since their father died. For me the main draw of this novella is Pierce's character and the interaction between him and Rachel. And as a bonus he shows up for the first time with absolutely nothing on him ;).

I'm not sure I'll ever get around to reading the other two stories, so here are comments on the two I did read, Two Ghosts for Sister Rachel by Kim Harrison (in the Hollows series) and The Harvest by Viki Pettersson (in the Signs of the Zodiac series, or whatever it's called). It's a fun story and the background it gives us on Rachel's family is especially interesting since the recent books are including more and more of Rachel's mother. Along the way we get some good interaction between Zoe and Warren, showing once again how much the agents of Light are just as arrogant and evil as the Shadow agents, but also giving some context to his abuse of Joanne. Pettersson uses tradition to set up the context (we get a discussion of the origins and meanings of the cornucopia, for example) while the meaning of Halloween in Harrison is idiosyncratic to the series, but both work well.

I thought this was well done because you don't have to have read the Rachel Morgan books to understand the world (much less confusing than the story in Dates from Hell), plus there are a lot of new things to learn for those who read those series. I was also surprised to see how different Rachel is physically in this short story than what I was used to seeing in the series, but her stubbornness and trying to do things seemingly beyond her abilities seems very familiar. Liu. I think this one is a stand alone, unconnected to an outside series, and it manages to have great world-building, action, characters, and plot in a short space. Possibly my favorite of the bunch because I liked the setting - urban China. I thought this was a great side story to go with the series which fills us in on the motivation of Zoe's mother as well as learning about her personality and how she was able to do what she did.

As it is, I already know all the things that went down with Pierce, so I can't fully appreciate the sweetness of his and Rachel's first meeting. He ditches Rachel with their crazy, not-handling-the-death-of-her-husband-well-at-ALL mother when she's FOURTEEN years old, and then comes back 4.5 years later and tries to tell her what to do with her life.

This anthology features 4 short stories by some very talented women. Run,Run,Rudolph is a fun story with a great romance and tense pursuit scenes.

Kim Harrison is best known as the author of the New York Times #1 best selling Hollows series, but she has written more than urban fantasy and has published over two-dozen books spanning the gamut from young adult, thriller, several anthologies, and has scripted two original graphic novels.