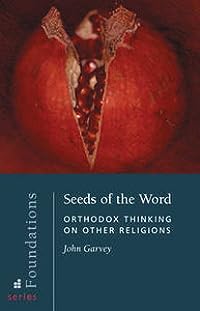 Seeds Of The Word: Orthodox Thinking On Other Religions

Read the Book "Seeds Of The Word: Orthodox Thinking On Other Religions" Online

The concluding page of the book reflects his answer to the question of whether non-Christians can be saved (an unequivocal Yes!), but ends with a humble twist: "When Saint Gregory of Nyssa speaks of 'every desire for the Beautiful,' we should look at the Orthodox theology of grace, which teaches that whatever we will be in eternity begins on this side of death; this is true for all human beings.

Fr. John Garvey has written a book on Orthodoxy and other world religions that has apparently become quite popular in various parishes in the United States. The book should be about some aspect of Orthodoxy, reflect the teaching of the Orthodox Church, and should be something we are comfortable with placing in the hands of our parishioners. Background The fundamental purpose of this book is to provide both a guide, if you will, to the manner in which Orthodox Christians should approach other religions, and a primer on many of the major world religions. The author plans on addressing how we should approach other religions by providing a survey of historical contacts between Orthodoxy and these other religions, as well as looking at some modern interactions. It is, perhaps, somewhat interesting, however, that the friend that recommended the book feels that this is precisely what he did, and thus it is disappointing that we wouldn't carry a book that establishes the Orthodox view on any topic. After I discuss the areas where I feel the author to be mistaken, I hope you can understand why I wouldn't want people to buy this book from me with the mistaken view that Fr. Garveys perspective is historically Orthodox or worse is "the" Orthodox perspective. Fr. Garvey knows that the readers of his books would not be academically trained theologians, so he is clear to reiterate, again and again, that we are not to adopt a relativistic approach. My Issues with the Book In the introduction, Fr. Garvey reveals what he believes is one purpose for interfaith dialogue, which is to help us learn more about our faith, and to possibly even learn new truths which can be absorbed into Orthodoxy. At one point we are promised that, "as we will see, the history of Judaism and Christianity has shown that the Christian tradition can absorb truths from other religions and grow from that contact. The first is that such an approach to other religions is not at all reflected in the history of Orthodox relations with other religions that is surveyed. 87) Fr. Garvey interprets this to mean that the elders needed to learn something from the pagan priest, or that the monk in the story needed to. I suspect there are many such stories within Christian history, I think, however, that the event that is being proposed as an instance of Christianity learning from another faith, is the possibility that the concepts of life after death and resurrection entered Jewish thought as a result of contact with Zoroastrianism (p. What we see in the history of interaction between Orthodoxy and other faiths is not an interest in learning, but either a defense, or an attempt at evangelization. If we move forward in time, skipping perhaps over the more polemical writings, we never find a case where the Orthodox were seeking to learn about another religion to enhance their own understanding. The first instance that I'm aware of, and that Fr. Garvey refers to, of Orthodox dialoguing for the sake of dialoguing, or for the sake of learning something new, is in the 20th century ecumenical movement, which is precisely why it is viewed so suspiciously by a large number of Orthodox. The next problem I have is that such an approach presumes that the person engage in the dialogue is well schooled in their own faith, so that they can discern the truth in the other religion from the falsehood. That is, the thought that we, as Orthodox generally, have anything to learn from other religions. Certainly, they may have elements of the truth, but the only way we know that is by vetting a belief or insight against the vast deposit of faith that is Orthodoxy. At the same time, one would need to be cautious that the new insight isn't, in fact, a movement away from the truth. Yet, two sentences later we learn that jihad, in fact, can mean holy war. One area which he addresses in some detail, and think quite correctly, is when he juxtaposes different potential approaches to other religions on the part of the Orthodox. One, as I have noted is basically a relativism which sees other faiths as merely other equally valid paths to God, which he is quick to point, is not a valid Orthodox position. A more Orthodox approach, exemplified in this book by Archbishop Anastasios, and exemplified elsewhere by, for instance, "Christ the Eternal Tao", a book on Taoism (written by a monk from a very traditionalist monastery here in the US), is to see where an understanding of God, because it exists at a basic level in all humans, is present in other religions. This has even led us to not carry books I really like, such as this one, even when it is the only text in English on a core Orthodox teaching, simply because the way the text is written could easily lead to erroneous conclusions. However, that the term had the sense of holy war, is made clear shortly thereafter: Muslims themselves have disagreed throughout their history about the meaning of the term jihad.