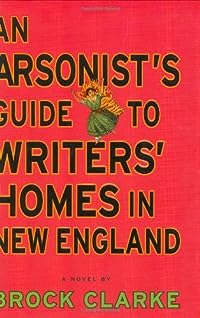 An Arsonist's Guide to Writers' Homes in New England

emerging at age twenty-eight, he creates a new life and identity as a husband and father.

In the league of such contemporary classics as A Confederacy of Dunces and The World According to Garp, An Arsonist's Guide to Writers' Homes in New England is an utterly original story about truth and honesty, life and the imagination.

I really wanted to love this book. Sam is a convicted arsonist who, through some stroke of luck, has managed to create a decent life for himself prior to the start of the book. But, something happens, and as the book progresses and he lets his world spin out of control, it comes to the point where you realize that if you didn't care so little about his life (and the book), you'd want to punch him.

It reminded me, strangely, of one of my most favorite books ever, Daniel Handler's Adverbs , where he does a similar kind of thing, but with achingly beautiful metaphors, and with ideas that are thrilling and original and wonderful and sad. Ugh. Here is a convolutedly stupid metaphor, which happens right after our, uh, "hero" has relieved himself after needing to pee for a long time, and someone has just told him that he doesn't have any money. Just like this whole monumentally stupid book.

And believe me, that's not the half of the unusual aspects of this book and its characters.

For instance, every chance the protagonist gets to make a choice--- especially an important one, he does nothing at all. "If you choose not to decide, you still have made choice!" Still, there's a heartwarming message we can get from this: Even if you do nothing, and coast through your life, trying hard not to make waves, your (in)actions still have effects on the people around you.

It started out well enough: Sam Pulsifer, a native of Amherst, Massachusetts, "accidentally" burned down the Emily Dickinson house when he was eighteen. All is well, until one day where, through a strange chain of events, Sam is accused of cheating on his wife (which he didn't do), gets kicked out of his own house, and moves back in with his parents (of whom he didn't speak to his family...

If ever there were a book I'd warn people against reading this would be it (or Jpod by Coupland, but don't get me started on that just yet) I'd avoid this one iffin I were youse.

An Arsonists Guide to Writers Homes in New England is the odyssey of Sam Pulsifer, a perpetual but completely accidental neer do well. His life story is rather convoluted, so suffice it to say that he snuck into the Emily Dickinson home one fateful night, eager to check out the veracity of several spooky stories his mother told him growing up, and unwittingly started a mighty conflagration that reduced the historic landmark to rubble and killed the amorous couple he did not know was inside. And someone starts torching the homes of famous writers in New England, causing the police to investigate Pulsifer.

I've never come across a character in fiction who was so annoying, unrealistic and just plain stupid. This book wasn't a bit funny, and while I again love the premise and the literary tweaks and allusions, this was just a grueling read.

Now released, can Sam find a new life as a husband and father while trying to prove his innocence when other writers homes start going up in smoke? Even Sam is uninterested in himself, which leaves anyone reading his story wondering why we should be interested in him either. But whether it was or not, An Arsonists Guide to Writers Homes in New England really missed the mark and only succeeded in making me wish I had purchased something else to read.

His novels include The Happiest People in the World, Exley (which was a Kirkus Book of the Year, a finalist for the Maine Book Award, and a longlist finalist for the IMPAC Dublin Literary Award), and An Arsonists Guide to Writers Homes in New England (which was a national bestseller, and American Library Associate Notable Book of the Year, a #1 Book Sense Pick, a Borders Original Voices in Fiction selection, and a New York Times Book Review Editors Choice pick).