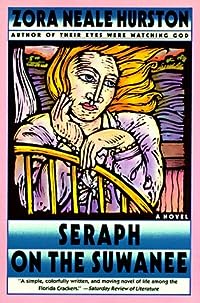 Seraph on the Suwanee

Read the Book "Seraph on the Suwanee" Online

The character arc of the protagonist, poor white "Cracker" Arvay Henson, is in some ways an ultra-traditional one: she must learn to be the best wife possible to her husband, Jim Meserve. Nor is there anything progressive in the Meserve definition of a "good wife": early in the novel, Jim lays out for Arvay his vision of matrimony and gender relations: Women folks don't have no mind to make up nohow. Lady folks were just made to laugh and act loving and kind and have a good man do for them all he's able, and have him as many boy-children as he figgers he'd like to have, and make him so happy that he's willing to work and fetch in every dad-blamed thing that his wife thinks she would like to have. The rest of the book deals with Arvay's (very) slow realization that it's harder than she expected to live up to the terms Jim laid out, and with her even slower metamorphosis into a person able to hold up her end of the arrangement. Is Arvay to be taken as an unfettered agent, who enters freely into a legal and emotional contract with Jim Meserve and is therefore bound by love and honor to conform as best she can to his proposed marriage model? This is certainly the reading that suggests itself initially, complete with a happy ending for the couple when Arvay finally finds the courage, assertiveness and commitment within herself to be the wife Jim wants. While Jim's initial portrait of married life seems to remove most agency from the wife (her decisions don't matter because she doesn't have a mind to make up; she need only laugh, act loving, have babies and get waited onoh, and "make her husband happy"), Arvay soon finds that her own passive yet insecure personality is a surprisingly bad match for these expectations. Like Lawrence's Lady Chatterley, therefore, Arvay is constantly holding back a part of herself, hoarding her own wilfulness against her partner and refusing to submit herself to his will. It's only after she lets go of her insecurities and directs her self-will toward supporting, rather than resenting, her husband that she is able to look outside herself and notice the ways in which Jim has been loving her with his actions all along. They're a source of the real frustration in the novel, and the possible source of any critique Hurston may have for Jim Meserve's marriage model. In the end, Hurston grants Arvay agency up to at least this point: while Jim says that women have no minds to make up, and that all that will be required of a wife of his is to laughingly receive bounty, he is actually looking for a much subtler understanding of how to read and perform acts of love and consideration, and perform them bravely and well.

It wasn't bad, but out of her four novels, this one was my least favorite.

The description on goodreads says that this book is about a marriage "full of love but with very little communication," but seeing as that marriage starts with rape and kidnapping, I would say I think NOT.

The experiment is not entirely successful, though not really due to any misunderstanding of white characters, although they sometimes seem too much like the Black characters of her other novels, and the lack of overt racist attitudes (though there is certainly a good deal of the patronizing kind) is perhaps more a reflection of Hurston's ideological position than realistic for the time and place.

I love Hurston's writing, and this book is no exception. However, it is an exceptional work for Hurston, in that the protagonist is white, and the story mainly about white characters.

It's a story of a tremendously flawed relationship, but one that is buoyed over a lifetime by love and, under it all, understanding.

I found it listed under her other works in the front of Barracoon (another good one) and found it at my library.

The heroine, young Arvay Henson, is convinced she will never find true love and happines, and defends herself from unwanted suitors by throwing hysterical fits and professing religious fervor.

This is Hurston's last published novel.

In 1925, shortly before entering Barnard College, Hurston became one of the leaders of the literary renaissance happening in Harlem, producing the short-lived literary magazine Fire!!