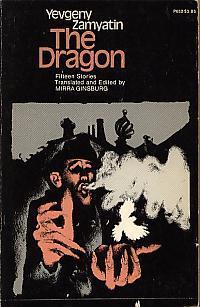 Zamyatin is best known for the brilliant dystopian novel We, one of the great classics of science fiction.

The Dragon is a collection of fifteen of his short stories (including a 67 page novella) published between 1918 and 1935.

Yevgeny Zamyatin's tales are the written equivalent of the tortured grotesques of Hieronymus Bosch. These tales are dark and brutal; picturing mankind an over-ripe, warped and twisted thing, base and prone to lying, torturing, cheating, and killing. Even when the stories are stunning and beautiful, there is something dark and twisted lurking in the shadows - not an otherworldly monster as in a horror tale, but worse, the dark predilections that wait in our nature. Beautifully written, much like Bosch's paintings are beautifully made, but reading this is engaging in a stunning portrayal of the worst of mankind. And according to this story, the worst of mankind is in Russia. Of course, the wealthy playa fucks everything up, but with the woman's help, and with the help of the giant whose obsession with illuminating his town overcomes his wife's needs (the simple giant wants his town to have the night-daylight of the city (the wealthy playa told him the city was illuminated at night)). And an ex-priest gets his comeuppance; that is supposedly the moral of the story, even though it obviously isn't; Zamyatin, just can't help twist that ironic "fuck you" knife. How the hell did this guy not get murdered by Stalin? One of my favorite stories in this collection.

Best-known for his 1921 prototype of dystopian sci-fi We, foreseeing the likes of Orwell and Huxley, Zamyatin's strongest works may nonetheless be his concentrated, rigorously crafted short stories, joining gorgeously surreal half-glimpsed imagery to original realist mythologies of Russian life, pre- and post-revolution, in the cities and as far from them as imaginable. Though originally a Bolshevik and supporter of revolution, Zamyatin was too much a born rebel and possessed too sharp a social conscience to make it under Stalinism. After requesting the right to a self-imposed exile in a letter Stalin in 1931, Zamyatin was somehow allowed to emigrate to France with his wife, where he found himself further shunned by the the other Russian emigrees, most of who had left Russia much earlier because they did not support the revolution at all. Previous thoughts: And here, the first truly great story of this collection: "The North", a fable of a fierce, passionate Lapp* girl and of man blinded by the artificial sun he seeks to build against the endless northern winter night. Unlike the earlier story, this is nonetheless filled with pathos: life is mainly vicious but brightly burning, like the brief flare of Marey's homemade sun.

Anyway, powerful stuff here - Zamyatin has an interesting style - he was rejecting kitchen-sink/proletariat "realism" for "fantasy", but his conception of fantasy is not our current one, it's closer to "magical realism", I'd guess, and sometimes just playing with symbolic language. As might be expected, this fanciful approach was not appreciated in the years immediately post-Revolution and so the volume starts out with the actual historical document of his "Letter To Stalin", in which asks to be allowed to leave the country with his wife, since the new Marxist critics found his works so troubling. Zamyatin also evidences a talent for sly humor and frank (for the times), earthy, sexual honesty in some of these tales. "X", meanwhile, parodies the frenetic paranoia of a (post-Revolution) former deacon, now just plain old proletariat citizen, as he is led around by fear, lust and jealousy, although a secret satire of Soviet bureaucracy seems also to be taking place. Outside of the truly excellent "The Healing Of Novice Erasmus", three other stories (each a bit lengthier than the other offerings, excepting "A Provincial Tale") are notable. Finally, the real oddity is the uniquely interesting "A Story About The Most Important Thing" which manages to give us the violence and betrayals of the Revolution on a human scale, while all the while juxtaposing that strand with a micro-scale study of a caterpillar's agony of transformation and, most surprisingly, the death of the last few members of an alien race on a dark star in space.

All these comparisons don't quite get at the heart of this book, but it's radically awesome, and really makes me want to read more, and know more about, Yevgeny Zamyatin.

Oh thank goodness yes; a devout, godfearing widow! Most of the 15 stories in this collection suffer from that "boring Russian pastoral" syndrome -- which I suspect may be at least partially because of the translation. I'd love to read Natasha Randall's take on these -- she gorgeously pulled out the beauty of Zamyatin's prose in her translation of We; beauty which comes across, at times, in this collection. It would take a seriously shitty translator to ruin Zamyatin's last sentences, which are almost unequivocally brilliant, and there are moments of jaw-dropping magic in "The Dragon", "The North", "The Cave", "X", and "The Flood." The standout, for me, was the (shockingly sci-fi) "A Story About the Most Important Thing" -- two parallel narratives pulling air out of bottles and lungs. This rare collection of short stories (can we PLEASE translate more of his shit to English?!

One of the short stories in this collection, in The Cave Zamyatin manages to throw on its back the Russian Revolution's model of progress and moving forward to create ideal human beings--he even sets the novel in Petrograd, ironic, of course, becuase at the time the city was paraded as a model of progress.

I wanted to like these short stories, but found that I only enjoyed a handful of them.