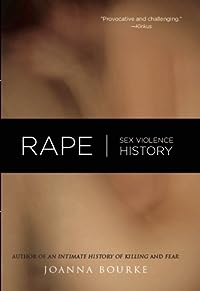 Joanna Bourke takes the issue of rape out from the academic ghettos and distills the truth so often exploited to sell newspapers.

It isn't about the women and children and men who are brutally sexually assaulted every year - as Bourke says in her introduction, to focus entirely on the victims and their experiences would be letting the perpetrators off the hook. A major part of Bourke's argument is that rapists are not born, they are made, largely through what we today call a 'rape culture', and it is only by addressing that culture, the 'she asked for it', victim-blaming, victim-precipitating, slut-shaming, patriarchal culture that we live in, that we can ever hope to eradicate this crime from our homes and streets.

The author recites previous research done on the topic from the 1700s to the present and what other historians and psychiatrists think about why rapists do what they do. I think this is an important topic to discuss and therefore an important book to read.

The focus of Bourke's work is not the victim, but the rapists, - how the public and experts have attempted to define rape and who commits rape. In 400 odd pages, Bourke paints a disturbing picture of how patriarchal and rape-condoning attitudes have and continue to encourage society to dismiss the victim and defend the rapist. In section three Bourke collects 'Case studies', rapists, victims or other sex offenders who fail to fit into the 'typical' definition of a rapist. She draws you in with anecdotes of real rape cases, yet I find myself becoming less and less engaged as her chapters wear on, as she moves from personal stories to dry academic examinations of 'self' 'sexed bodies' and such.

Statistically the majority of victims are female and the majority of perpetrators are male even when the victims are male but the book does not ignore female rapists and nor does it ignore rape within prisons or the military. The book concentrates on rapists rather than their victims and the ways in which society has tried to treat them and/or punish them with varying degrees of success. The book examines the attitudes to rape victims and perpetrators both within the legal professions and the judiciary and from society and the media.

But this book should be read, in particular when one looks at the popularity of books and series like Fifty Shades or Anita Blake, where the relationship it could be argued is not, well, kosher. If you look at the descriptions of Twilight and the like, it is all about possession, which in many ways ties into how we see rape, something that Bourke points out. Bourke looks also at men as victims of rape, and not just in prison.

It's obviously disturbing, given its subject matter, and it's not necessarily a book I'd recommend reading on the train on your morning commute, it'll attract a lot of strange looks. Adopting a Foucauldian approach familiar to readers of "A History of Sexuality", Bourke explores how the rapist is structured. Can women rape men?), she looks at legal constructions and tropes.