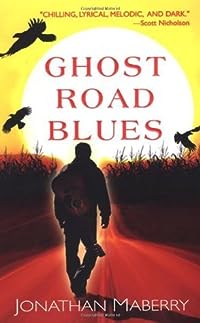 Winner of the Bram Stoker Award for Best First Novel From a new master of horror comes an apocalyptic showdown between the residents of a secluded, rural town and the deadly evil that confronts them wherever they turn .

Evil Doesn't Die The cozy little town of Pine Deep buried the horrors of its past a long time ago.

The evil that once coursed through Pine Deep has been replaced by cheerful tourists getting ready to enjoy the country's largest Halloween celebration in what is now called "The Spookiest Town in America." It Just Grows Stronger But then--a month before Halloween--it begins.

Yes, the residents of Pine Deep have drawn together and faced a killer before.

But this time, evil has many faces--and the lust and will to rule the earth.

I enjoyed the small town setting but the awful things going on and around there just left me kind of numb and very bored. I didnt care for any of the characters and that is always a big problem for me so I more than likely wont be continuing on with the series.

Maberry appears (intentionally or otherwise) to be paying homage to quite a few writers here: The Bone Man killed the devil with a guitar. The only real downside is the fact that, being the first in a trilogy, once the final page has come and gone the story is clearly far, far from over. Hells a-coming and we all gotta learn to play the blues.

This is a dark atmospheric supernatural thriller. "Hells a coming and we all gotta learn the blues" "Dark Hollow was as dark as a tomb and as inviting as an open, beckoning grave; yet there were worse places in Pine Deep, places where the shadows were darker still and the air hummed with a malevolent tension.

And I always liked October and Halloween and Friday 13ths. Naturally, this means that I like to read horror novels too. Sadly, not one horror book has managed to actually scare me yet, but I think it's because of the medium because it can't be the writers. Hence, every year I like to pile up some spooky books for October. The evil actually being German (apparently I don't need a costume for Halloween, I just celebrate in the US and let people know I'm German, that will suffice).

Yeah, so this book really pissed me off. Because I loved it, but I hate getting roped into reading a trilogy. I want to give this five stars, but to me it's like rating 1/3 of a book.

Let's talk about the stuff that didn't quite work for me: *I think that this story depends a bit too much on the human evil quotient for my tastes. For this reader, when I pick up a fiction novel in the horror category, I want to see some nasty, unreal, supernatural baddies who scare the heck out of me, but hopefully get thoroughly vanquished by the good guys. Reading about horrible people and their horrible acts on others doesn't do it for me. However, reading about (view spoiler) an evil waste of skin stepfather nearly beating a kid to death, a psychopathic criminal abusing and/or murdering numerous people, a racist mob beating a black man to death is a lot to handle, and let's not forget a religious fanatic who hears the voice of God in his head and commits unspeakable acts in God's name--it's a bit much for me, even if it ties seamlessly into the story.

I wanted regular horror and got it. Fortunately, there's a lot of bigger-than-life characters in this small town and the good guys are good pretty much all the way through. I just have to wonder what it might have been like to have this as one gigantic tome like the good old days of epic horrors instead of the bite-sizes publishers think we want.

You could read any one sentence and immediately know this book was written by a man, making the author much too visible throughout the story. At one point a characters falls to her knees in the mud after an emotional event, and, I kid you not, stares up into the aforementioned thunderstorm and yells, "Nooooooooo!" The grand secret that is revealed far too late in the novel actually makes the story worse and more cliche.

For most of this novel, Maberry drives forth with a perfect balance of descriptive prose and action/dialogue. The only thing that stops me from giving this five stars is a couple of issues I had: Firstly, I found the dialogue between Crow and Iron Mike to be a bit corny. I'm very much looking forward to reading Maberry again, and the next time will be with the second in this series.