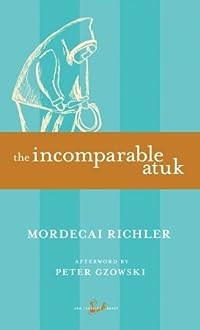 Transplanted to Toronto from his native Baffin Island, Atuk the poet is an unlikely overnight success. Eagerly adapting to a society steeped in pretension, bigotry, and greed, Atuk soon abandons the literary life in favour of more lucrative and hazardous schemes.Richlers hilarious and devastating satire lampoons the self-deceptions of the Canadian identity and derides the hypocrisy of a nation that seeks cultural independence by slavishly pursuing the American dream.

Of course we have some very high quality art and culture, but let's face it, certain tv shows that would never have made it through a season in the US are still with us years later - cough, cough, Corner Gas. And while I love the Group of Seven too, if I see their art bastardized on one more set of coasters or placemats, I'm going to scream!

Richler is clearly having great fun with this idea: that racism is not exclusive to any one ethnic group and no cultural background is immune to the corrupting influence of success. Richler has minted a universe filled with characters who all undermine our assumptions about race and gender: the resentful liberal who is angered at the all-too-human actions of the minorities he champions, xenophobic and unobservant Rabbis, a self-help guru who shamelessly helps himself. In the world of 'Atuk', The corrupting influence of success, be it financial, academic, or social, pervades everything and undermines our noblest and most cherished values and, worse, our self-image.

Richler jumps from a multitude of character perspectives without proper transitioning, making readers feel lost at times. Due to its nature as a satire, laughter is sure to ensue, as well as barbs directed at society, jabs intended to make you think, has the world really changed? The ambition, back-stabbing and hypocrisy are rampant still, and nothing has really changed; people have just gotten better at hiding their true natures. It only makes matters worse and people don't learn anything because no one sees how twisted they are; to the world they represent the perfect citizens, and in their homes followers of Nazi fascism or Ku Klux Klan members. In 2012 you are going to stand there and tell me that you think because of your skin colour - something you had no say regarding - you are BETTER than Black, Asian, Hispanic, or other people of colour? I think the whole world needs a therapy session. Let me tell you exactly why that cannot and will not happen; you are not God. The day these insecure individuals realize the greater bad they do onto others and the world, we will be a step closer to actually accomplishing something.

Although this could be a thesis about the western view of the noble savage, that to this day persists in the western perception of minorities in its attempt to keep up a WASP-ish political correctness, Richler only uses this idea as a staging ground for an all out attack on modern-hip-upbeat-politicallycorrect-mediadriven-society as it was in the 70's. Although it doesn't offer the same strong characters that Richler is known for in his other works, the fact that it is much more story and scene driven works well. It is also very refreshing to see that a younger Richler was capable of portraying Goy (or at least, non-jews) in just a convincing way as he is with the jewish characters in his later works.

Having been discovered by a fur trader, his poem had reached such popularity among the city folks that they wanted to see the "Eskimo" from Baffin Bay in person. With Atuk Richler brings out the different political and social stereotypes of the day and, above all, takes Canadians to task over their self image and their national identity, their latent or conspicuous racism and bigotry, their consumerism, greed and tendency to admire all that is American.

Not content to be labelled as a self-hating Jew by critics for The Apprenticeship of Duddy Kravitz, Richler sought to broaden his reach and go for the self-hating Canadian medal as well.

Richler returned to Montreal in 1952, working briefly at the Canadian Broadcasting Corporation, then moved to London in 1954. In England, in 1954, Richler married Catherine Boudreau, a French-Canadian divorcee nine years his senior. Some years later Richler and Mann both divorced and married each other.