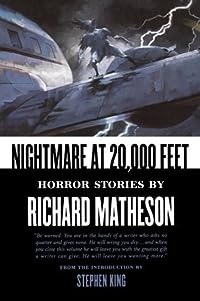 Remember that monster on the wing of the airplane?

Matheson's story-telling is addictive and the heavy, meaty sense of tension-filled dread with which he is able to consistently imbue his stories is truly special. What a great way to lead off this collection as it showcases Mathesons tremendous skill at layering on real terror with psychological perception so that the reader continues to ask themselves...how much of this is real? Short, tension filled, engrossing and with the best last line of the entire collection. Only an extraordinary writer like Matheson could have pulled this story off as it balances on the edge of mental instability and genuine horror all the way until another amazing ending. While I think by the end of the story, it is pretty clear what happened it is all slowly pieced together based on the reactions of the officers and the boy who have all seen the crime scene. WITCH WAR: This 5th story makes it a stellar 5 out of 5 for Matheson in this collection. LEGION OF PLOTTERS: One of the most disturbing stories in the collection, this is a salty little psychology study of a man who has hit 11 on the paranoia scale and believes, literally, that everyone is out to get him. However, Matheson brings a little extra oomph to this story through his understated writing, his unlikable main character and the slow, tension filled build up to the terror spewing climax...Ah satisfaction indeed!! Two of the stories Long Distance Call and Prey are among Mathesons best known stories and I really enjoyed them. For those interested the remaining nine stories are: Madhouse Long Distance Call Slaughter House Wet Straw The Holiday Man Old Haunts Crickets First Anniversary Prey Overall, a no doubt about it five 5 rating and Richard Matheson earns an immediate spot among the most impressive writers of speculative short fiction I have ever encountered.

When you read a good horror story, fear leaks from its pages and infects you. Matheson was a twilight zone writer and he excels at stories with surprising endings that will horrify you, and occasionally even make you laugh. There are some real gems in here- the titular Nightmare at 20,000 Feet is a classic (and was made into an iconic twilight zone story, staring William Shatner), along with Prey, a bullet-fast tale of a murderous wooden doll. In my (admittedly limited) reading of the genre I've found that many horror stories start with genuinely atmospheric, palm-sweat inducing build-ups that end with cheesy, unconvincing twists. Matheson's influence on the horror genre is substantial, and several of the stories in Nightmare at 20,000...

A stated favorite of Stephen King, Matheson serves as a literary bridge between King and the earlier horror master H.P. Lovecraft.

This is my first real foray into Matheson's work that I can remember (I read I Am Legend a very long time ago and can't quite recall it). The concept and idea for each story is compelling and will keep you reading. In the entire collection the writing has a great sense of mischief throughout, that same sense that King's writing has in his best creepy tales.

He has this way of making me feel like I am a part of the story in a way that works brilliantly, especially considering that Matheson loves an open ending. There are a lot of psychological and paranoia stories in this collection, and they are some of Matheson's best, though back to back like this, it can feel a little bit overwhelming in how similar they are to each other.

He knows the gremlin is there but the darn thing disappears when he tries to point him out. I felt it more intensely because I am very close to my sister and I can imagine how much anguish it was causing the protagonist to watch his brother turn into a stranger. I think this is the power of horror, that it can drive home how settled we are into our normal, nice worlds blithely unaware of how ugly the other reality is. And even in the case of one story where a guy murders his wife and then is subsequently haunted by her ghost, you still feel shocked at the comeuppance his wife's spirit delivers to him. In some of the stories you find yourself thinking, that's not fair. And maybe that's the real kind of horror that we face everyday, that bad things happen to the normal, everyday person, the not especially good or bad, person. I think that Matheson really impresses me in his skill with the short story because writing a short story is such an art.

Without extreme horror, splatter, profanity and all these techniques used (to no avail most times) by contemporary horror authors to scare the readers, Matheson manages to deliver some intense thrills proving that it's purely a matter of talent to write stories that can cut those who read them as well as the one who wrote them.

His first short story, "Born of Man and Woman," appeared in the Magazine of Fantasy and Science Fiction in 1950. Between 1950 and 1971, Matheson produced dozens of stories, frequently blending elements of the science fiction, horror and fantasy genres. He wrote a number of episodes for the American TV series The Twilight Zone, including "Steel," mentioned above and the famous "Nightmare at 20,000 Feet"; adapted the works of Edgar Allan Poe for Roger Corman and Dennis Wheatley's The Devil Rides Out for Hammer Films; and scripted Steven Spielberg's first feature, the TV movie Duel, from his own short story. Other Matheson novels turned into notable films include What Dreams May Come, Stir of Echoes, Bid Time Return (as Somewhere in Time), and Hell House (as The Legend of Hell House) and the aforementioned Duel, the last three adapted and scripted by Matheson himself.