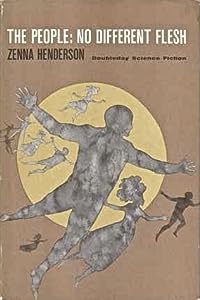 The People: No Different Flesh

A novel expanded from a short story (different from book 1 Pilgrimage which was a push of short stories connected by new material) of the alien PEOPLE and earthlings with gifts similar to those of the People -- who might be lost PEOPLE!The "People" stories inclulded in this book:No Different Flesh (1965)Deluge (1963)Angels Unawares (1966)Troubling of the Waters (1966)Return (1961)Shadow on the Moon (1962)

Read the Book "The People: No Different Flesh" Online

Henderson was raised as a Mormon, and made her name writing about "The People", a group of human-like extraterrestrials who live among normal folks in rural America. I find Meyer's vampires, even the ostensibly good ones, utterly appalling. Meyer has become one of the most widely read authors of her generation, while Henderson is an minor 60s SF writer that most people haven't even heard of.

As with many people whom you'd really LIKE to know about, it wasn't reported in major media--I learned about it from Locus. It takes the People back to the loss of the Home, and through to the return of some who went to the New Home. The bridge story is of a precocious little girl and her father, coming to Earth from the New Home to arrange fosterage of the child after the loss of her mother. It's as if Henderson was unable to comprehend the notion that anything might be done to prevent such losses, even among the learned People. There's also a bigoted doctor in this story, who apparently really believes in the nonsensical notion of disposable people. A few humans get told these stories, as a sort of ransom for the care they gave to the lost child and her father. The individual stories: (1) Deluge: If you'd wondered about Bethie's Mother's (Eve's) history, this will give you a rather better introduction than you'll probably like. Getting to know people many of whom are horribly abused later personally and by name makes it harder to deal with their later sufferings. In this story Henderson pursues her own quarrel with God. She tries to be the advocate of a 'Presence' that would destroy the Home apparently for no better reason than that the People were getting too comfortable in their nest. Even if it might arguably be better for the People to get out and explore (they'd given up space travel generations before), what good does it do the toolas and the feathers and the flamen and the koomatka and other living things, to destroy the Home? This part is left (probably deliberately) vague), the loss of THIS life is unredeemable, and the non-People, at least, get little or no preparation or warning. One thing that struck me as odd from the beginning was that there was no apparent attempt to police the cult, so that the people of Grafton's Vow were able to put their twisted beliefs into horrific action, and murder very nearly an entire family without any outsiders apparently even realizing what happened. But the other one which the man who adopts Lytha uses in rebuttal is not presented so clearly: it's the one that says "...and do not oppress the widow or the orphan, the stranger or the poor, and do not devise evil in your hearts against one another." (3) Troubling of The Waters: This story establishes dating fairly precisely--depending on whether you consider 'the Turn of The Century' to be 1900 or 1901 (there was substantial debate at the time), the People arrived on Earth in 1893 or 1894. The habit of answering the last question but one is a method of keeping people on their toes, perhaps...but I don't know if it would work very well in the long run. At that time the majority of coffee in the US would be from Latin America, because the African plantations were very far away, and the Hawai'ian ones would only just have become (marginally) available. (4) Return: Contrary to the teaser, I did NOT like this story. If you're not having a good time, you're not studying. These few good elements usually get me past my reluctance to read this particular story: but I have to hesitate, take a deep breath, and get a running start to get through it, every time. (5) Shadow on The Moon: The 'Doubting Thomas' in this story devotes himself obsessively to realizing his son's dream. I should point out that the argument that it's blameworthy to devote yourself to achieving something like space travel is one of the main reasons the People made such a botchup of their landing on Earth. But if one simply subsumes one's own identity into the story, there's nothing new to be learned, even if the story was previously entirely unknown to to audience. It might have made for an interesting sequel to have a series of stories about cases Bethie and Dr Curtis worked on, for example.

The People #1 - Pilgrimage The People #2 - No Different Flesh Author: Zenna Henderson I love this series - re-read it regularly! The two books have also been collected in the omnibus edition Ingathering: The Complete People Stories of Zenna Henderson. In the case of the People stories that question might be - what if alien people crash land on earth, and what if they are different - perhaps even better than us? No Different Flesh This book tells the story of a couple, Mark and Meris, who, one stormy night, find a young girl who has fallen in a capsule from the sky, and who has special abilities. In Pilgrimage, as in The People: No Different Flesh, the plot shifts between the present day story, and stories about the People from their past, which comprise the People's race memory.

these aliens are not too alien but sort of a better version of human, more thoughtful, more self-aware- though interpersonal relationships, gender identification, expectations, powers, tendencies, are all of mid-century south western us...

Most of the stories are pretty good, with the first being excellent and "Return" feeling very preachy.

Publishing her "People" stories in the leading science fiction magazines of the 50's, 60's and 70's, Henderson became a pioneer in many areas of science fiction literature. Henderson was one of the first in science fiction to truly take young people seriously and write expressive, mature stories from their point of view.