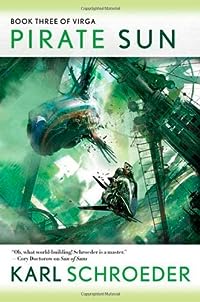 Return to Virga, a bubble universe artificially separated from our own future universe, and the setting of Sun of Suns and Queen of Candesce. Chaison Fanning, the admiral of a fleet of warships, has been captured and imprisoned by his enemies, but

On the surface, there's a lot to like about Pirate Sun, the third of Karl Schroeder's Virga books. The Virga books are well-described as "high adventure driven by hard-nosed science fiction." In this regard, the world in which the story takes place remains interesting and compelling.

So it was with eager anticipation that I started the third book in the Virga series, anxious to find out what will happen to Venera; her husband, Chaison; and the pirate sun builder, Hayden Griffin. The world of Virga is always a factor in the action of Pirate Sun, but like Queen of Candesce its role is subtler and off centre-stage. Alas, Chaison and Antaea are the focus of Pirate Sun, and neither of them are as interesting or profound as Venera. Like his wife, Chaison's struggle is one to return home to Slipstream. And unlike the delightful, complex con game that dominates the political landscape of Queen of Candesce, this part of Pirate Sun just feels so random. Also, Schroeder elaborates on the juxtaposition between technologically-primitive Virga and the Artificial Nature-dominated world outside. As foreshadowed in the previous books, Virga is both sanctuary and potential battlefield for the entities of Artificial Nature. Some people, like Venera and Chaison, happily exploit what little they know to their own advantage, even though they don't have a particular desire to see Virga altered by the return of advanced technology. But when I finished Pirate Sun, I found myself wanting moreboth because I didn't feel like everything was concluded, and because I had enjoyed the book. Pirate Sun is another great return to the unique world of Virga, but like the first book in this series, Schroeder's characterization and plot fail to live up to the great environment he has constructed for them. While the plot and politics do leave me wanting more, Pirate Sun also cooled somewhat my ardour toward Karl Schroeder.

The third book in the Virga (series, trilogy?) revolves around Chaison Fanning, the admiral husband of Vanera Fanning and his journey back to Slipstream. In the earlier books in the series,Chaisson Fanning, an admiral in the nation state of Slipstream and his wife Vanera Channing are able to thwart an attack by a neighboring state of Falcon, by using the key to turn off the damping field and using radar to track and destroy the Falcon ships. The novel tracks chaisson fanning's journey back to Slipstream and explores more of the worlds of Virga on the way and also is about honor and loyalty.

After Sun of Suns I thought I would be willing to read books in that world forever. I would have much preferred a book about Hayden's adventures in constructing the sun from the captured pieces of Candesce sprinkled with the five or six chapters about Chaison that had any relevance.

Karl Schroeders Virga series caught my eye a few years back with its intriguing blend of hard sci-fi and medieval humanity. Ive always been interested in media that explores humanitys reaction to discovering that an underling truth of their world is false: The Matrix, Scrapped Princess, and now the Virga series. Schroeders books cut an extremely advanced form of humanity off from any technology more sophisticated than a jet engine and the culture has regressed to the point that they no longer understand the science underlying their home, an artificial habitat consisting of nothing but air and a fake sun. The protagonists of the first novel, Chaison Fanning and has wife Venera, are citizens of a Pirate Nation called Slipstream. Hopelessly outnumbered, Chaisons gambit relies on using a legendary lost technology called Radar to outmaneuver the enemy forces in a dangerous region of Winter, the cold air between kingdoms. Chaison is captured after heading off the fleet from Falcon Formation and placed in a zero-gee prison to rot, which is where we find him in Pirate Sun. A bungled escape attempt leaves Chaison at the mercy of Antaea, a member of the mysterious Home Guard. Antaeas motives are unclear, but she wants the Key of Candesce back from Venera for the Home Guard. The Fannings little ploy back in book one opened Virga to hostile forces, if only for a few hours, and the Home Guard is now on high alert. Where Venera shines in the midst of intrigue in Queen of Candesce, Chaison is a military man forced into a complex web of plots and schemes and he doesnt quite know how to handle it. The greater conflict, hinted at in all of the novels, between the homogenizing outside forces seeking to assimilate Virga and the local Home Guard, desperate to maintain a last bubble of humanity in a digital universe, comes to the forefront in the final pages of Pirate Sun, and while this inevitable confrontation is critical to the greater story of the entire series, the conclusion is almost forgone.

I guess other stuff kept getting in the way. Pirate Sun does pick up in the final stretch when stakes that matter are introduced to the plot - as in, hints of an existential threat to Virga itself and sinister forces from outside the enclosed world that will probably come into play in the next two volumes in the series.

Against this premise is a set of very interesting characters and an intricate plot ... Huge plot that keeps going and going Premise: Incredible.

Kinda like Venera Fanning, I just had to read the second book first.

Next time could skip on re-read.