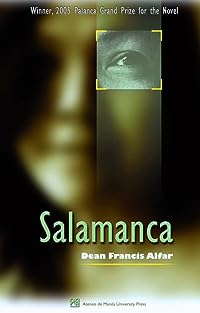 Dean Alfar's first novel is about the sorcery wrought by love, lust, and literature, by friendship, family, and the Filipino nation. Salamanca streaks across decades and spaces, tracking the stormy relationship between polymorphous-perverse Gaudencio Rivera, whose passions ignite prodigious feats of writing and wandering, and Palawena beauty Jacinta Cordova, whose perfection transmutes walls into glass and adoration into art.Tracing the arc of an imperfect marriage sundered by acts of nature (not least human) and sutured by acts of will (not least nonhuman), and vividly peopled by a multigenerational and multinational cast of kith and kin, this work of imagination takes the reader on a magical excursion into Philippine life and history while setting new standards for the Filipino novel along the way.

A fecund, oversexed imagination is on display in this first novel by Filipino writer Dean Francis Alfar, the main proponent of speculative fiction in the country. He felt an almost unbearable torrent of words rise up through his body: inarticulate syllables swiftly welled up from the soles of his feet; combining into nouns at his knees, verbs at his loins, adjectives and adverbs by the time they reached his heart; joined by prepositions and conjunctions from his hands and arms; becoming phrases, clauses, then whole sentences when they reached his head, threatening to erupt not only from his lips but also seeking immediate egress from his eyes, ears, and nose; before finally causing his hair to writhe as whole paragraphs, chapters, short stories, novellas, and novels recoiled backwards, suffusing his entire being with the terrible power of unspoken expression. The magical absurdity of that passage is consistent with the novel's use of lust and love as materials for fictional creation. Gaudencio exploits his experiences, his loves, and his many betrayals of themlike his betrayal of Jacinta that resulted to their short-lived weddingas materials for his writing career. Gaudencio mirrors the experience of immigrant Filipino writers, those who continue to long for their country even as they seek to establish their literary careers abroad. The bisexual Gaudencio fills a gender gap in the characterization of male lovers in Philippine literary novels, at least novels of "epic and sprawling" ambition like Salamanca, novels which consciously integrate historical details and markers in their text. The novel also makes reference to the use of magic as a political strategy of writers during the period of dictatorship after Marcos declared Martial Law in the country in 1972. The opportune use of fantastical elements in stories "permitted veiled criticisms of the nation's dictatorial regime without risking a visit from the police and an interminable incarceration in Fort Bonifacio, or any of the other venues where enemies of the government were routinely tortured, earning the sad victims the appellation 'desaparecidos,' the Vanished Ones." Most significantly, Alfar makes a metaphoric case for sexual appetite as the "life force" of literary imagination. Alfar seems to be hinting that, in the continuing process of national imagining and becoming, the liberal attitudes toward sexuality is the liberating force that makes us aware of the mystery of love and existence. Salamanca is a highly aware novel, aware of its opportunistic "exploitation" of human experience as fictional material, of magical elements as a creative force, of the politics of literary creation, of the national literary tradition it seeks to be an essential part of, and of the debilitating histories of colonialism and dictatorship.

Reading this book feels like reading Gabriel Garcia Marquez's Love in the Time of Cholera (4 stars). The main plot, however, is about a bisexual man Gaudencio Rivera who falls in love with a beautiful maiden, Jacinta Cordova who lives in Tagbaoran (Palawan), in a house that has glass walls. So, Gaudencio Rivera goes back to Tagbaoran to have a child with Jacinta Cordova with the condition of giving her freedom. Jacinta Cordova agrees so they go back to Manila, live in Gaudencio Rivera's ancestral house and start raising a family. In a number of pages, I thought that the author is losing his track by telling unimportant or irrelevant sub-plot that has nothing to do with the main plot, the love story of Gaudencio and Jacinta.

Basically, the plot goes like this: Gaudencio Rivera, the main character in the story, announces to his friends one day in a dinner party in Los Angeles that he wants to go back to the Philippines and return to his wife. He ended up in the town of Tagbaoran after fleeing Manila because of a love affair gone wrong. His fate changed the moment he saw Jacinta Cordova, the most beautiful girl in the town, and perhaps even in the "whole of creation." He first heard about her the day he entered Tagbaoran: "The first two things Gaudencio Rivera was made aware of -- within hours of arriving by carabao-driven cart at the secluded town of Tagbaoran on the island province of Palawan -- were these: that the most beautiful woman in creation dwelt by the river, and that it was pointless to even dream of being loved by her. He was informed that her name was Jacinta Cordova, and that her beauty was of such purity and perfection that the walls of the house she lived in had turned transparent long ago, to allow both sunlight and moonlight to illuminate her incandescence." He saw her while he was out strolling in the woods and along a river. He then spent the next days and weeks, barely sleeping, feverishly writing short stories, poems, novellas, novels and dedicating all of them to Jacinta. Eventually, they got married, but their union only lasted for several days, and wasn't even consummated, for he ran off with Cesar, a friend he met while earning his living in the town. To cut the long story short, Gaudencio and Jacinta traveled back to Manila and they lived with his mother and brothers. Jacinta planned to give him only one son, as they had agreed, and return to Tagbaoran to marry a man who understood, respected, and loved her. And, just like before, the walls of their house in Manila became transparent because of her sheer beauty, just like 'salamanca' (magic). In fact, the story itself reminds me of Love in the Time of Cholera. The protagonist in that story is also a man possessed by feelings of love and desire, and he, like Gaudencio, slept with different people.

Dean Francis Alfar's novel Salamanca (2006) is a (quite short) piece of magic realism that stretches across much of the life of its central protagonist and through several decades of the Philippines' history. The book is full of plots, but the one that holds the others together concerns Gaudencio Rivera's discovery in Tagbaoran, a remote small town in the Philippines' island province of Palawan, of Jacinta, a young woman of such incandescent beauty that she has turned all the walls of her house to glass; of his desertion of her eleven days after their as-yet unconsummated marriage; of his decision years later to have children of whom he determines she must be the mother; of her initial reluctance to countenance the prospect; and of her eventual rediscovery of happiness through this unorthodox relationship so that, finally, she rediscovers also the beauty of her youth.

General/Language Like with most of Alfars work, language in this novel is strange, almost whimsical, but underscored by something heavier, a certain darknessthe setting is familiar but made new, and the actions of the characters are quite bizarre, almost scandalous, when held against its more formal, even serious counterparts. Places are characterized either by its people or as people, very much characters themselves in this story. And yet, even for the vivacity of its characters and the sure deftness of its language, Salamanca fails to some degree in justifying the tone it had set. It carries itself well as it stands, and the language is rich enough to appeal to a more intellectual appreciation of the text.

Sometimes when I think of everything that has happened, I ask myself the same question Tonio asked me a long time ago. I know that I have not been the most capable of letter writers, but I want you to know that when I think of the times that I was happy, you face and voice are always there. For times will come and waiting in vain will result to none. One thing I liked about the writing, both Gabriel and Dean's style, is how they tell a story to come, not spoiling the readers but rather setting the readers mood, yet will invite us, readers to read the story and experience paragraph by paragraph.