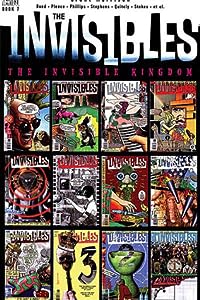 Through clandestine movements, a sinister secret organization has been creating a hypnotic state of conformity and control through their manipulation of the government, business, and entertainment industry.

Now with the fate of all mankind hanging in the balance, the secret freedom fighting cult make their final rebellious stand in the war of control versus chaos.

It took me over a month to read this final book. Finally this weekend, I forced myself to get through this so I no longer have to stare at it staring back at me on my desk and so I can say that Ive read the complete Invisibles series. Id normally try to write a summary of the book and try to contextualise it before the review but, flicking through it once more, theres no point - I have no idea what happened in this book other than the series ended. Usually by the end of a series, theres been a storyline building up and youre looking forward to its resolution but to be honest Ive never really known what The Invisibles is about. Weeeeell theres about 100 pages of gibberish as the various members of The Invisibles train (doing karate, flying jets, doing drugs) while Sir Miles (the villain) is tied to a chair in a windmill (or a time machine) and goes through some weird mental conditioning. It wastes his time, it wastes their time (granted they dont know its wasting their time), it wastes the readers time, and neither The Invisibles or Sir Miles learn anything useful. But I can see why there have been books written about The Invisibles because, if nothing else, Morrison has crammed all kinds of strange ideas and theories into this title, so theres a lot of rich material to extrapolate and ponder upon. The only problem with that approach is that its extremely boring to read - replacing things like narrative and characters with half-baked ideas, druggy visions, and an incoherent, experimental style to communicating them thats almost anti-sober-reader just alienates the audience, as they cant figure out what the hell is happening. When you put no effort into creating characters, the reader wont care about them; when you put no effort into the story, theres no narrative tension or drive to interest the reader; Morrison just heaps reference upon reference of esoteric stuff that unless the reader is already interested in them, like his views on the Kabbalah or whatever, youre not going to be remotely engaged with the book. Ill re-read other Morrison books but Ill never come back to The Invisibles.

I must be the one who's wrong." This is one of those times where I'm right. I bought the entire Invisibles series based on the seemingly sound merit of practically everyone I know who reads comics, all of who recommended this as one of "The greatest comics ever!!!!!!!". I buy the first Invisibles book..."Uh...okay?" "No man, keep reading! Finally I get to the seventh and final book, and read exactly half of it before I get distracted and put it down. I couldn't bring my self to read the finale to one of "The greatest comics ever!!!!!!!" for well over half a year. His ideas are great, and that (usually) is why I read fiction, I love the 'what if?' Unfortunately the Invisibles is one of the few times great ideas alone can't right the the seemingly endless amount of production wrongs.

There's a lot to wrap up in this final volume and after riding through this series I'm sad to see it go. That said, anybody ignorant enough to argue comic books are not art would be referred to this series by yours truly.

, if you're curious.) Wolk said this, which is a pretty appropriate way to start a "recommendation" type review: "It is, in a lot of ways, my favorite comic book ever, and I have never been able to recommend it to anyone else with a clear conscience, partly because it's such a ridiculous mess in so many ways, and partly because it struck me so much as being exactly the kind of story I like to read--so much so that it's hard for me to imagine other people being as passionate about it as I am." While The Invisibles is hardly my favorite book, I do like it a lot, almost precisely because of what an enormous clusterfuck it is. The anti-establisment stuff starting to seem a little naive? Unless they're "Barbelith." (Whatever the hell a "Barbelith" is...) For all it's out-there kookiness, the first series (meaning those issues collected in Say You Want a Revolution, Apocalipstick, and Entropy in the U.K.) actually follows the established Vertigo template (a la Sandman) pretty closely: magic performed by British men in trenchcoats, a central narrative to start us off followed by individual issues scattered throughout exploring secondary and tertiary characters, and artists mostly from that early Vertigo stable: Steve Yowell, Jill Thompson, etcstyles grounded a little more in the mundane than the kind of pop-art craziness that Morrison evokes in later collaborators. Once the action moves to America in series 2 (Bloody Hell in America, Counting to None, and Kissing Mister Quimper), artists like Phil Jimenez and Chris Weston take over, and the dominant idioms switch from magic and suave spies and the French Revolution to Big Explosions, alien invaders, military conspiraciesyou know, American stuff.

Morrison's story works like a drug trip (indeed, he utilizes several real-life trips as direct inspiration for his comics), the semi-random firings of neurons brought on by sleep and (hallucinogenic) drugs creates an overlay of sensory and symbolic experience which we then try to comprehend. This story is too close to home for him, and beyond basing it on his own philosophies, he suggests that the whole work is a magic spell that is controlling his life. The end result being that Morrison stops working to make the thing coherent because he believes it will be, no matter what he does. It taught me a lot of things not to do as a writer and helped me to recognize why some of Morrison's stories work so very well and why others are so wacky and confused. I'll have to make sure that if I ever write my dream project--near and dear to my heart--that I have a very smart and very honest editor to stop me from buying my own line of bullshit and trying to sell it to my hapless fans, who would prefer I just wrote well instead of playing the magical messiah.

There are some really great things in here, and I think Morrison had put some serious thought into how to construct his finale. I thought about putting off my review until I felt like I understood what happened in the book and my own reaction to it a little better, but something tells me that might never happen.

:D The pace the story is frenetic and fast-paced without ever slowing down with things in the presence and future coming together to explain elements happening in either period!

No spoilers here, but the beauty of this book/series, it's almost spoiler-proof. This officially my favorite series of books.