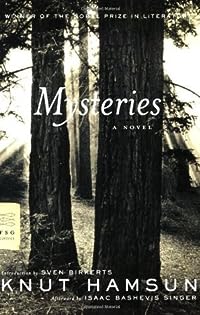 Hamsuns aptly named second novel, Mysteries, is a dazzling, dark look into human nature and mans psyche. It is no surprise that Henry Miller claimed that Mysteries was closer to me than any book I have read, this novel is so probing and insightful that you feel it begin to pick your own mind as the pages churn by. Plunging into the existential mysteries of the human heart and soul, Hamsun pens some of his most memorable characters while keeping the reader forever pondering the truth behind the abundant mysteries. Much like his first novel, the great Hunger, this novel follows the concise rise and fall of emotions in the protagonist, creating a well rounded depiction of a man in the grips of mania and excitement. The true nature of Nagel, is never fully revealed, instead, the reader must discern what they can as small pieces of the whole are glimpsed, then hidden again behind contradictory evidence. Hamsun does occasionally have Nagel speak aloud in long tirades of his inner thoughts, but this is used sparingly and creates a bit of unevenness in the writing, although it is ultimately not distracting. This third person perspective is highly efficient to the delivery of this story, as the reader often learns of Nagels whereabouts from his mouth as he professes them to the townsfolk. The real brilliance of this novel is how Nagel serves as a barometer of human nature and in juxtaposition with him, the true nature of the various members of the town can be seen with crystal clear accuracy. This existential probe begs the reader to examine his or her own life, and examine their own opinion on Nagel as it may reveal a great deal about them. This novel is not as direct and concise as Hunger, yet it can be felt that Hamsun was reaching his talents out to greater heights and experimenting with perspective and layering of time (there are many amazing instances where Hamsun will seamlessly follow from various past incidents and present goings-on all within one flowing paragraph without the reader becoming lost), so the rough patches that are slightly noticeable within this book are understandable. While this novel isnt quite as close to perfection as Hunger, which few novels are, Mysteries is my favorite of Hamsuns novels, although I would recommend the former if you are looking for an introduction to his work.

When you read books from countries like France and Norway, which have recently suffered the experience of being occupied, you start to get some idea. It was rather like that with Hamsun and the Norwegians. Everyone had read him; Norwegians are an exceptionally literate people. During World War II, while Norway was occupied, Hamsun expressed his deep admiration for the Nazis. But the same book constantly mentions Hamsun's novels, and the author makes it clear how deep his artistic debt is. Their solution was to determine that Hamsun was legally insane. Hamsun had an unparalleled ability to project his feelings so that other people could experience them too; when I read Mysterier, it was almost as though I had gone through Doctor Parnassus's magic mirror, and found myself inside his crazed mind. Here are two passages I particularly liked, with my translations.Det minder mig litt om en nat på Middelhavet, på kysten av Tunis. Frøken Andresen som satt Nagel nærmest sa uvilkårlig: Ja Gud hvor det måtte være deilig! Imagine something like a sea full of singing, an underwater choir. Forstå mig ret: jeg mener ikke netop stemmens materielle lyd, den kan være høi eller lav, klangfuld eller rå, jeg mener ikke det stemmestofelige, tonetillværelsen, nei jeg holder mig til mysteriet bak den, den verden som den utgår från ... Altid ska det være en verden bak!

When I was a teenager my dad urged 2 novels on me - Hermann Hesse's Glass Bead Game and Knut Hamsun's Hunger - which I consider all-time favourites to this day. Upon first reading Hunger I thought, 'Huh? But 20 or so years and several readings later I'm with Dad. Hamsun (the young Hamsun) was a genius. Hunger, Mysteries and Pan (his first 3 novels, in that order) are masterpieces, worthy of comparison with anything I've ever read. There are scenes in these books that have burnt themselves indelibly into me: in Hunger when the delirious narrator becomes paranoically obsessed with an old man in the park; in Mysteries when Nagel plays the violin at the town talent night; in Pan when Glahn (heartbreakingly) shoots Aesop. It's mind-bending, the tricks he plays on himself and others, the tangle of motivations, the palpable sense of mystery that he, the reader and Hamsun all feel as the story unfolds. Flash forward to John Fante and Charles Bukowski, both of whom read Hunger and reiterated: even by then (40-50 years later) he was one-of-a-kind. Read Hunger and tell me it doesn't breathe. This guy in a loud suit who all through the novel has denied he has any musical talent even though he carries around a violin case (he even goes so far as to admit it's just for show, though he could be lying) suddenly gets up at this rinky-dink talent night and plays his heart out. Read Hunger, read Mysteries, read Pan. Re-read them. (As to the Hamsun-haters, those who won't read him because 'he was a Fascist', wake up!

A stranger by the name of Nagel appeared, a singular character who shook the town by his eccentric behavior and then vanished suddenly as he had come. Mysteries is haunting, enigmatic, existential, and one of the best novels I have come across.