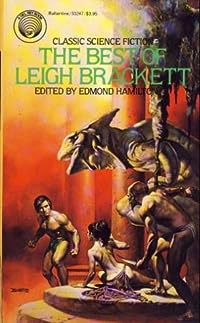 The Best of Leigh Brackett

There was once a young girl who created a host of strange and wonderful worlds.

These were her very own planets, with such fascinating features as the Sea of Morning Opals, the Mountains of White Cloud, wicked Canal cities, and lost lands full of magic and mystery.That girl's name is Leigh Brackett.

And today, more than 35 years after selling her first science fiction story, she continues to thrill and excite all lovers of imaginative writing.

Her haunting tales of ancient Mars, wind-swept Venus, and remote worlds beyond human technology have become almost instant classics in the genre; and now Edmond Hamilton, Leigh's husband and a great SF writer in his own right, has personally collected ten of her best stories into a beautiful hardcover anthology.

Here's a preview of the amazing tales:THE JEWEL OF BAS.

There's an ancient legend passed down among the people of the outermost planet.

It tells of Bas the Immortal, possessor of the Stone of Destinya jewel of such power that owning it gives a man rule over the whole world.

Ciaran and Mouse, two unscrupulous gypsies, only half-believed the story until they found themselves at the mercy of Bas's fierce android army ...

pawns in a sinister plan to enslave the human race.THE VANISHING VENUSIANS.

once he was human!

But three hundred years ago he betrayed his homeland for a race of alien vampires who fulfilled his every desire in return for a small "favor." All he had to do was lure innocent Earth spaceships to their doom on the vampires' world.

Read the Book "The Best of Leigh Brackett" Online

What she primarily decided to write were "planetary romances": ostensibly science fiction, such works were really sword and sorcery tales, usually set on improbable versions of our neighboring planets. Unlike Burroughs', her cities are not merely dying but decadent, her villains not simply evil but selfish and deluded, her harsh heroesif they are noblekeep quiet about it, and her women not only speak up when they choose but know how to take care of themselves.

"The Vanishing Venusians": Straight up creepy adventure, no character development. "The Moon That Vanished": Good beginning and great ending, but the long middle (a trek to discover the location of godlike powers) was too drawn out. "The Enchantress of Venus": Brackett's strengths and weaknesses are best exemplified in this Stark story concerning a cruel family ruling an island on Venus. Great and fully developed main character, a nice creepyness, effective tragedy, and good pacing makes this one of her best. "Shannach-The Last": Fun pulp adventure with some edge and a bite, about a treasure hunter becoming involved with a race of slaves and an ancient space goon. There's a description of the protagonist kissing an alien girl and her cold response that is wonderful, but it doesn't raise the story above a "meh." 2.5 stars.

Back in the late 1970s and early '80s, Ballantine Books had a wonderful thing going with its "Best of" anthology series: 21 generously packed books celebrating 21 of the most influential authors of science fiction's Golden Age, all reasonably priced at $1.95 (I refer here to the paperback editions, all of which I managed to collect) and all featuring beautiful cover art and informative introductions by a distinguished sci-fi author or critic. But of all those many volumes, one of my favorites of the bunch was "The Best of Leigh Brackett" (1977), and just recently, in my continuing celebration of the centennial of the so-called "Queen of Space Opera," I decided to reread this 400+-page affair for the first time in...can it be 35 years? Unlike many of the other "Best of" collections, however, "The Best of Leigh Brackett" does not begin with its strongest pieces, and for a logical reason: The stories here are presented almost in perfect chronological order, and Brackett's abilities as a wordsmith continued to evolve and improve (as would be expected, I suppose) as she went along. In "The Jewel of Bas" (from the Spring '44 issue of "Planet Stories," the pulp magazine in which so many of Brackett's early tales first appeared), the reader makes the acquaintance of a newlywed couple, the troubadour Ciaran and his wife, Mouse, who live on a red-skied planet that most readers seem to conclude is Mars--even the book's back cover refers to them as "Martian lovers"--although the story itself never tells us that (and indeed, it mentions that the action is set on the 10th planet of this solar system!). After these two stories, "The Best of Leigh Brackett" kicks into high gear and delivers at least a half dozen pieces in a row that this reader deems minor masterpieces. "The Veil of Astellar" ("Thrilling Wonder Stories," Spring 44) gives us the tale of a spaceman from Earth who betrayed his people, thus enabling the residents of the dying world of Astellar to kidnap entire starships, and shows how he later tried to undo his terrible crimes. Some truly brilliant work by Brackett here, in a story a bit reminiscent of her mentor Henry Kuttner's 1946 classic "Valley of the Flame." Brackett often wrote like a man, by the way (don't jump on me, ladies--that's Hamilton talking, also), and never more so than when depicting scenes of carnage...and in this description of temple girl Alor: "Her body was everything a womans body ought to be...which was wide shouldered and leggy...." Up next in the collection is "Enchantress of Venus" ("Planet Stories," Fall '49), the second story that Leigh wrote featuring her most famous character, Eric John Stark. "The Woman from Altair" ("Startling Stories," 7/51) brings us to planet Earth for the first time in this collection. To wrap up "The Best of Leigh Brackett," we have two more stories that transpire right here on good ol' Mother Earth.

The collection spans Ms. Brackett's entire corpus of science fiction, and as such the early pieces are rough, shot through with pacing problems and hobbled by limited vocabulary (count the number of times "opal" or "opalescent" is used in the first three stories).

A collection of science fiction short stories I thought I would devour in days but it took weeks! The stories were this wonderful blend of classic science fiction, Burroughs style worlds, film noir and social commentary.

Brackett knows how to keep you turning pages with well-written action scenes.

Many of these stories have powerful undercurrents of fear, suspicion, paranoia, oppression: dread.

Here's a listing of the stories and the dates: The Jewel of Bas (1944) novelette The Vanishing Venusians (1945) novelette The Veil of Astellar (1944) novelette The Moon That Vanished (1948) novelette Enchantress of Venus Eric John Stark (1949) novella The Woman from Altair (1951) novelette The Last Days of Shandakor (1952) novelette Shannach - The Last (1952) novella The Tweener (1955) shortstory The Queer Ones (1957) novelette This book was one of a series published by the Science Fiction Book club in the 1970's as "Best of", putting together some excellent collections in the process. The book includes an excellent introduction by Edmond Hamilton (Leigh Brackett's husband) as well as a very good afterword by Brackett. Hamilton reveals in the introduction (dated July 7, 1976) that they had finally written a story together (to be published the following year) for Harlan Ellison's anthology "Last Dangerous Visions." The story was titled "Stark and the Star Kings". The story would possibly have never been published at all but it somehow managed to appear in a combined omnibus of Brackett and Hamilton in 2005. The intro also notes that after writing some of these stories Brackett collaborated with William Faulkner on the screenplay for "The Big Sleep" with Humphrey Bogart. I'd recommend this as one of the better examples of older science fiction for those who enjoy reading that era. I think this might be the story with the Bogart character that Hamilton referred to in the introduction. Another favorite of the collection is "Enchantress of Venus." The writing here is very good and the imagery wonderfully vivid. I don't believe I have read one of Brackett's "Stark" stories before. Brackett is very good at story beginnings. "The Tweener" and "The Queer Ones" that finish the collection are very different types of stories than the earlier adventure stories. Fear and paranoia is an element in several of the stories, but the prime one in "The Tweener." Uncle Fred brings back a small rabbit-like mammal from Mars - the kids name him John Carter.

Between writing screenplays for such films as Rio Bravo, El Dorado, Hatari!, and The Long Goodbye, she produced novels such as the classic The Long Tomorrow (1955) and the Spur Award-winning Western, Follow the Free Wind (1963).