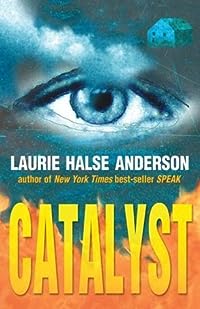 Kate manages her life by organizing it as logically as the periodic table.

Then, things change as suddenly as a string of chemical reactions; first, the Malones' neighbors get burned out of their own home and move in.

Kate feels that her life is spinning out of her controland then, something happens that truly blows it all apart.

Set in the same community as the remarkable Speak, Catalyst is a novel that will change the way you look at the world.

jodi picoult's schtick is to just take whatever makes the headlines and structure a book around it. (don't look at me, i'm not a spoiler bomb.) and yet, i still want to read more from her. i read them and it's eh and i grab another book and i never think of them again. nah, but it's like a potato chip book. i think it's great that the main female character in this is a total science nerd. this is kind of like a pre-black swan book, where there is a highly driven female character who should really have everything go right for her, based on how much time and effort she puts into being the best.

Much like Melindas story in Speak, Kate and Teris stories are not complete at the end of this book. Sometimes a lack of resolution can annoy me but it didnt here; life keeps going and what we have here are a few chapters in these characters lives. Okay, I know this contradicts what I just said but I would love to read a book written from Teris perspective! Id like to find out what happens in her next chapter (hopefully something overwhelmingly positive) and, scary as it may be, I want to spend some time in her head. I read a review prior to starting this book that absolutely ruined the main reveals for me. I would have loved to have had the chance to figure these out for myself so will be more selective with the reviews I read before Ive finished a book in the future.

Will say trigger warning for death as a young character does die towards the end of the story which was upsetting to read.

That was what my face looked like when I finished reading this book eight minutes ago. What was Anderson thinking when she decided to write this book? Maybe I'll write a book about a nerdy preacher daughter who really loves science and math. And you might as well know now that it was the little 'brother'. I know that in real life, often times things don't have a happy ending. There was a lot of moping around going on in this book. And the worst part to me, about everything, was when Teri stole Kate's watch. I didn't even like Kate (she's stupid for only applying to one darn school) but i was ticked off for her. This is just like that darn Twisted book. I'm beginning to sound like the characters in this book.

When I read a book I don't want to have to use a bookmark.

The real story here is Teri's, but nobody tells it -- not Teri, not Kate, not Anderson herself. Teri is the one with the story which drives the plot, but we're stuck listening to Kate; Melinda couldn't speak to the people around her in her own world, and so her voice, speaking directly to us, created a unique bond between the character and the readers. Her story not only had a clear arc and well-defined end, there was a reason she was telling it, to us; the storytelling itself became part of the plot and theme, as it does with all good first-person novels.

And the thing is, I kept reading, mistakenly thinking that this would be one of those books that resolves everything in the last few pages and everything clicks by the end of the novel. Don't get me wrong, Kate's character actually had potential. Maybe this book has a really good message that I am unable to see. What I do know for sure is that this book was a pain to read, and unless you want to torture yourself and be trapped in the mind of Kate Whining Malone, you probably won't be a fan of this one.

Catalyst by Laurie Halse Anderson is a sequel/companion to Speak. In other words, Kate's narration sounds a lot like Melinda even though they are completely different characters. Ironically, the increased dialogue in this book (Melinda does not talk throughout most of hers) doesn't make the characters more developed. The other thing to bear in mind about Catalyst is that it is not the same kind of book as Speak. Kate's path throughout the narrative, and her way through her problems, is very different than Melinda's. (If you haven't guessed yet, Kate's path involves a lot of running.) This book also has a different appeal. But Speak was a great book that was, overall, more powerful than its sequel.

Check it out for loads about my writing process and my books:https://www.reddit.com/r/books/commen... Two of her books, Speak and Chains, were National Book Award finalists.