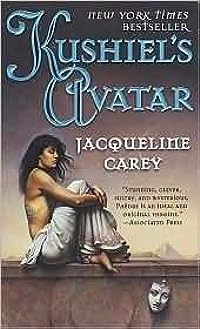 Phèdre nó Delaunay was sold into indentured servitude as a child.

She has lain with princes and pirate kings, battled a wicked temptress, and saved two nations.

Through it all, the devoted swordsman Joscelin has been at her side, following the central precept of the angel Cassiel: Protect and serve.

She has spent ten long years searching for the key to free him from his eternal indenture to the Master of Straights, a bargain with the gods to save Phèdre and a nation.

The search will take Phèdre and Joscelin across the world and down a fabled river to a forgotten land ...

What an ending to the Phedre Trilogy!!! An ending worthy of a series which is one of a kind and not to everyone's tastes. The struggle between honor, love, political games, pain, sexual hunger and desire, and loyalty are what makes the characters of Phedre, Kushiel's chosen, and Joscelin Verreuil, the defrocked warrior priest, some of the most rounded and layered characters in Fantasy I have ever encountered. They were surrounded by loyal helpers and availed themselves of their needs, growing accepting of each-other's peculiarities, knowing nothing is ever done with intend to hurt the other. But the time of this relative peace was prophesied to end by the tenth year and so it has! However, can even Joscelin and Phedre's love survive the travails and her nature, which test them to the edge of forbearance...

I know some people will read this series and say that some of the characters are without flaws, but I don't care. I ended it more than half in love with both Phedre and Joscelin, and I dare you to read them and not feel the same.

Although I did enjoy the first two books in this series, it was with a bucket of reservations: repetition, overblown language, and inadequate characterization of the supporting characters, which made the impressively plotted political machinations so much less involving.

As this setup may signify, the stories are rich in political intrigue, the prose is sensual bordering on luxuriant, and the scope of the books is epic. Occasionally, Carey's turns of phrase will reveal to me the wide-eyed fangirl behind the sophisticated writer, and I cherish those moments almost as much as the passages that leave me feeling awe. This book in particular is the culmination of Phedre's story, and it is a fitting swan song for our anguisette. Also, in previous volumes, we saw a great deal of Phedre's masochistic sexuality; in this volume, we dwell on how awkward it is for her a great deal, but we spend very little time exploring that aspect of her sexuality, and much more on her romantic life. These observations aside, the story was epic and sweeping, the writing as elegant and well-tooled as ever, and the characters rich and fascinating.

However, as much as I love this book, there's a good chunk--about 300 pages--I will never ever read again.

As I finish this trilogy for the second time, I am - no kidding - hugging the book to my chest and willing for Phèdre's story to continue. That is how much I love Kushiel's Legacy. How do I describe my love for these books? Whatever it is, these books make me think, they make me believe. At the centre of this book - no, of this legacy - lies one meaning, and one meaning only: Love. I realised that whenever I turned to the map at the front of the book, seeing Carthage just made my blood boil.

A powerful conclusion to this epic trilogy. The world, religions and mythology are excellently crafted and I loved visiting Egypt, Venice, Cyprus, Croatia, among others!, and how the separate mythologies we know today intertwined in this story and came to this beautiful conclusion.

Thing 1: I really like how this series talks about womens power political, sexual, subversive. Heroine is literally marked by a god to suffer, to be able to bear it so other people dont have to. Its a literalization of the implicit shape of a lot of epic fantasy, and of course a pretty good metaphor for the relationship of writer to character.

She travels the world looking for it (a significant part of these books is travelogue, giving us a glance at Carey's intriguing alternate history) and along the way she undertakes to rescue the child of her greatest enemy.

After returning she started her writing career while working at the art center of a local college.