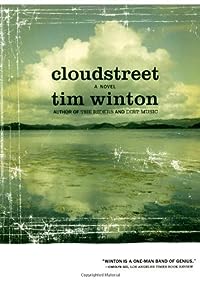 An award-winning work, Cloudstreet exemplifies the brilliant ability of fiction to captivate and inspire.

Struggling to rebuild their lives after being touched by disaster, the Pickle family, who've inherited a big house called Cloudstreet in a suburb of Perth, take in the God-fearing Lambs as tenants.

Here's how my reading of Cloudstreet progressed: First week: Ok, this is pretty good, I guess. Fourth week: Ok, I have to read my book, but I know it will make me nauseated. . Hey, this is a pretty good book . Eighth week: Wow, this is a good book .

I couldn't remember why I wanted to read this book, by the time I opened it. In the end, I was dancing with joy and merriment on the blankets by the river alongside the Lambs and Pickles with a song on the lips and a sad grand finale lurking in the corners of my soul. It was one of those deaths in which Sam's bad luck took the center stage, after he already lost four fingers in the machinery at a factory and his family were already resident in the back rooms of Joel's bar. Stuck with the old colossal dumb for twenty years before it could be sold, gambling Sam and Dolly the drunk had no other choice but find a way to keep it standing. Prospering was not in the works for both the house or the family. On the one side was the 'prosperous' Lambs with their shop on the ground floor, with Oriel beating the drum to the family's marches, and Lester baking his way to a better living, with his secret ice cream recipe luring the customers from far and wide. On the other side was Dolly Pickles, who missed spreading her legs in the bar hovels far away in their hometown, and Sam Pickles pressing his luck all around. Fish was the only one who could hear middle C monotonously toggling itself through the darkness of the haunted story of the music room. Fish lived in his own world, after he was saved from drowning and declared a miracle by his Gawd-fearing parents, Oriel and Lester. Ever since that incident, Fish only returned half way back to the world. And Lester and Oriel waved Gawd good bye for the next twenty years. It was only after reading the ending that the secret of this book hit me between the eyes. 'Dumbfoundingly' brilliant, it overturned every single conclusion I came to all through the tale of the two families battling life and each other out in picturesque, emotionally-charged prose. Cloudstreet is simply a brilliant book!

The families' regard for each other alternates between disgust and wonder, passion and forgiveness as their children and their backwater state of Western Australia grow up and away. Winton tells the classic tale of messy, intolerable families- how each is a unique disaster and a treasure. Mr. Winton must be a national treasure in Australia.

What they also shared was the misfortune that each family had a member disabled by a Traumatic event; Sam Pickles, the dad, lost four of his fingers to a barge cable while loading guano to be shipped to mainland, and Lambs second son Fish survived from drowning during a fishing trip, yet was left with severe brain damage. I closed the book with a number of characters stuck in my head for days; For example, the moms of the two families couldnt be more different: sergeant-major matriarch Oriel Lamb was omnipresent yet was never in the epic center of a drama like the gorgeous but emotionally damaged Dolly Pickles, who required more adult supervision than her own children. The human strengths and flaws are universal, and the Western Aussie landscape provided a unique canvas for the overall painting. The book is a perfect combination of ordinary and extraordinary, and a feast for those keen to gain perspective in Aussie Aboriginal culture and history.

But here's where he grows into himself, where he unbuttons the constricting Hemingway obsession (fairly common among Australian writers in the 80s) and lets it all hang out, and where, once and for all, he eclipses that cold-hearted big-headed ex-advertising man (Carey) and becomes a kind of institution. Since Cloudstreet Winton has become the type of writer who dives into big books without a life jacket and swims out to the deep water. Me, I kind of tuned out around then, but I still remember Cloudstreet fondly, and recommend it to anyone interested in Australian fiction.

Note to Mr Winton: sometimes less is more when it comes to hairy ass cracks.

If you think your family is strange, you're probably right, but they can't be any weirder than the Pickles and the Lambs. Tim Winton allows this truth to unfold so perfectly between the parents and children of the two families. I love the way Tim Winton weaves the beauty and power of nature into his novels.

There were several things about the book that really annoyed me and really removed any enjoyment I may have derived from reading it.

Pick an adjective; it' s in this book.