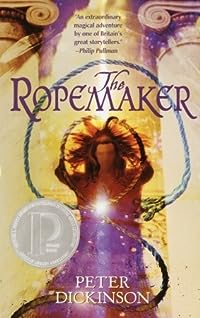 Tilja has grown up in the peaceful Valley, which is protected from the fearsome Empire by an enchanted forest.

Tilja is the youngest of four brave souls who venture into the Empire together to find the mysterious magician who can save the Valley.

Read the Book "The Ropemaker" Online

This might be due to the kind of vague aspect of time that he touches at in this book. I think he did a nice job at the end though and he definitely was able to weave a great story.

Several times I kept thinking, "Oh, so it's over already? The world-building is also very good, (the evil empire taxes everything, including death, and if you can't afford to pay the taxes there's a city you can go to that will help you "take care of it" for free) and the magic system was a bit confusing and paradoxical at times but still interesting.

I kept telling myself that I would pick it up and read it and yet I always ended up reading something else instead.

So. The Ropemaker is the story of Tilja, a girl who lives in the peaceful Valley, which has been cut off from the Empire to the south and the land of the horse tribes to the north for twenty generations due to an act of magic that has been maintained by two families, one of them Tilja's own. And while we know Tilja isn't a full adult, it's hard to get a handle on exactly how old she is until about two-thirds of the way through the book, which I think allows you to read her as a variety of ages...and they pretty much all work. Honestly, this book is a lot like The Hobbit to me: a simple, magical journey with what is ultimately a very simple goal, but also a story that is enveloping and beautiful at the same time.

In fact, it's not even mentioned any sort of involvement with anyone because why would you even put a love plot where you have to deal with surviving magical assassination attempts from an empire that wants to destroy your entire people?

People tell them things. And there's some Ropemaker guy who, despite being the titular character, is barely in the story and mostly deus ex machinas all the troubles the main four run into. The Ropemaker would have been much better condensed and tightened into a 100-page story rather than endless descriptions of walking along a road prodding a recalcitrant horse and getting long paragraphs of exposition from random people about what to do next.

Books change each time you read them." Of all the quotes from any film in the world I could use to describe my relationship with this book, I think the one that has always stuck with me was this particular quote from Mr. Koreander from the second "NeverEnding Story" movie. "Books change each time you read them." Of all the things I could ever have imagined, a logical-minded child when I was younger and first saw that movie, that was absurd. Sadly, I didn't get to finish reading it; my parents announced seemingly out of nowhere that we were going to be moving soon, to another city, and I was made to return The Ropemaker to the library. While there, I did frequent the nearest library for something to do in my personal down time whenever my aunt would arrive home at the end of the day, and on one of these visits, I happened to spy a copy of The Ropemaker sitting out at one of the reading tables, and snatched it up to read. Something about the book appeared to have changed, and all at once I remembered Mr. Koreander near the start of the second NeverEnding Story movie saying "books change each time you read them." But that surely didn't make sense; how could it have changed? But alas, my nanny-ing kept me busy, and come the holiday season, I ended up returning home without having finished reading the book again. My shift started later in the morning, so I was able to stop by the library beforehand and poke through the stacks to find something to read, as my own belongings (including my books) were largely all packed away to be taken to the apartment I would eventually move into with my husband-to-be. Maybe the book had never changed at all, but it had come to me at such different points in my life that I read the story in different ways and remembered it differently, took different things away from it, because it was always at such pivotal moments of change. This time I finished the book, found myself in love with the story it told and utterly satisfied, because I realized it is a coming-of-age sort of twist on the classic structure of the Hero's Journey told in loquacious and rambling prose not unlike old stories or fairy tales, in settings that range from a mysterious little village in a mountain to a desert city that feels reminiscent of the Arabian Nights. Two years later, I purchased two copies--one paperback, one hardback--to add to my personal library, but when my husband asked if I was going to re-read The Ropemaker right away, I told him that I was waiting for the right moment.